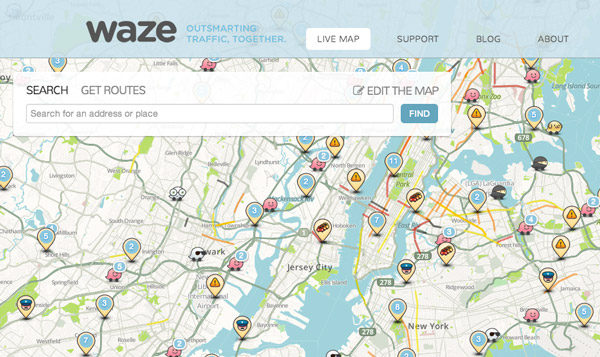 Avoiding traffic this holiday season is probably the one present everyone would be asking for if they could. Tackling traffic through digital and social, Waze hopes to be that gift. With a record number of travelers expected to hit the road for Christmas and New Year's this year, Waze has potential to increase its user base purely from anecdotes told by friends and family. But there's one big problem for Waze looming in the shadows.

Google acquired Waze back in June for $1.3 billion, and began to integrate it with Google Maps and Google Now during the lead up to Thanksgiving. Waze lets drivers help drivers on the road by generating real time traffic reports. The reports are created passively through GPS as well as drivers actively sharing traffic updates.

The active shares are the greatest strength for Waze users and the greatest liability for Google. Drivers sharing updates on traffic accidents, potholes, and police traps provides context to the passive traffic reports that the app collects on its own. Without them, Waze is a solid traffic app, but nothing special for users. Active updates let drivers know the reasons behind the traffic and metadata, rather than having to infer them. A car stopped on the side of the road is a lot different than a highway closure. The problem is the key to giving context to the passive data comes from drivers.

Texting while driving causes about 23% of traffic accidents and the penalties are getting higher and higher (here's a map from LifeHacker). Updates on social media can fall under the texting bans, but laws are also being passed that target posts directly.

Liability for Knowingly Distracting a Driver

While the laws are deterrents for users to post, making the app less useful, the liability comes from the New Jersey appeals court ruling that people can be held accountable for knowingly texting a driver. Waze is based on drivers actively posting updates. Despite what their EULA may or may not include, if a Waze user gets into an accident while posting on traffic, the precedent is there for a case against the company as knowingly distracting the driver by soliciting posts in general. The same case couldn't be made against Facebook or Twitter because they're not asking for traffic updates.

Not to mention a California ruling against using smart phone map apps.

Passive Traffic Data is Worth More to Google

For Google, the most important feature of Waze is the passive data collection and reporting. Integrating the passive data into Google Maps and Google Now is one thing, but when they integrate it into their self–driving cars, they'll have the tools in place to create a full network that can detect, reroute, and ultimately control traffic. In the future, it may make sense for Google to sacrifice Waze's context, and shutdown the traffic posting features — earning some good will from the government for Google as it fights other battles, avoiding the liability issue entirely, and not risking the passive data collection. At least until cars drive themselves and Waze context posts always come from passengers.