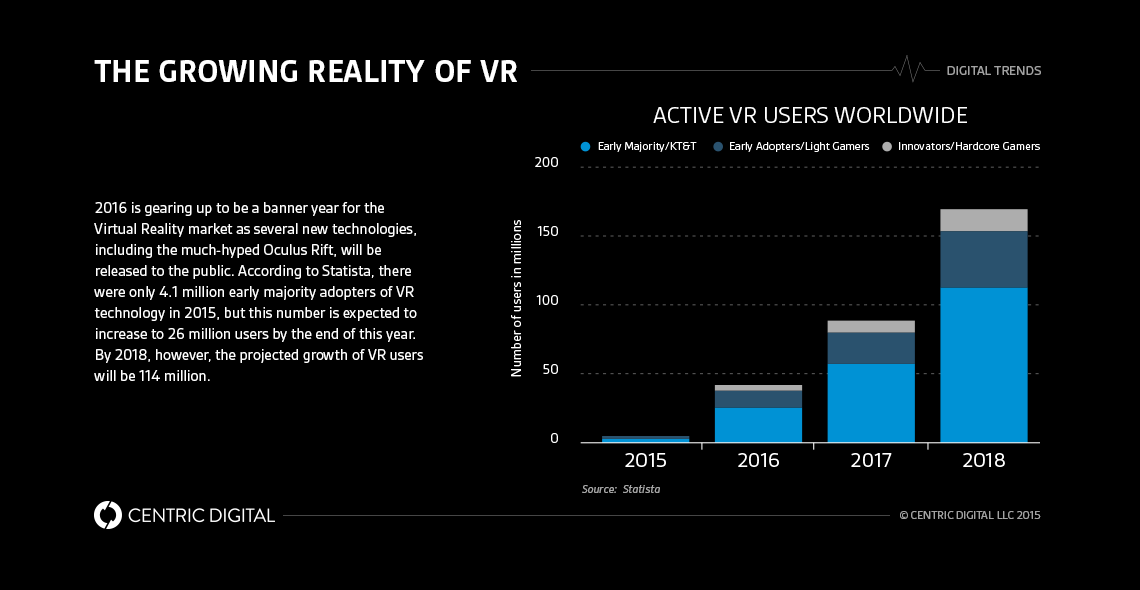 How is virtual reality (VR) and augmented reality (AR) changing the way in which companies deliver customer and user experiences?As technology changes, shifts, and develops, so does the user experience (UX). From website design to mobile applications, companies have been trying to create seamless and engaging experiences for their customers across platforms and devices. With the developing technology of virtual and augmented reality, UX will soon experience a whole new set of possibilities.Right now, we’re seeing companies dip their toes in AR/VR user experiences like Home Depot’s AR Project Color App or the Mattel’s View-Master virtual reality starter pack. But these examples are only touching the surface of potential. As the technology continues to grow and improve, so will the experiences that companies offer to consumers.

Good VR, such as the Oculus Rift, which is set to release at the end of this month, is offering the realistic sense of “presence” for the very first time since VR was introduced many years ago. By blending various technologies, this type of “presence” is breaking down the glass barrier that we’ve used to interface with digital content since computer, tablets, and smartphones became our daily companions.Before this type of VR emerged, digital content has been accessed from “behind the glass.” With VR (and better AR) on the way, we can now truly immerse ourselves in digital content. This immersion and the sense of “presence” the technology offers will have the biggest impact on user experience. Companies will need to re-evaluate how they can tell stories in brand new ways. Flat pictures, words, videos, must now be transformed into three-dimensional worlds that consumers can be transported to. This is a completely new paradigm in product marketing, product engagement, and storytelling.

Microsoft Hololens really ignited the AR evolution and interest in recent days. The conceptual videos and demos they’ve released show tremendous potential for all different types of experiences beyond VR’s gaming focus.Then there’s Magic Leap (cinematic reality), the secretive company Google invested half-a-billion dollars in last year, which has some interesting tricks up its sleeves. Right now, they’re inventing a new way of creating seamless AR via tiny projectors that shine lights directly into the user’s eyes. Magic Leap has the potential to take AR to new heights simply because it is taking a different angle. Instead of trying to project 3D holograms into the real world, Magic Leap’s technology AR hologram projections that are directed into the users’ eyes will produce unparalleled realism. This has tremendous potential for shopping and marketing applications, where augmented product imageries and messages could be very realistically and seamlessly integrated into consumers’ field of vision.

Mobile technology will have the most profound impact on the future of VR and AR user experiences because of the ubiquity and availability of these devices already in our hands. For an average consumer, mobile devices used in conjunction with lightweight devices or glasses for AR/VR engagement will be more realistic (in the short term) than the high cost and bulky form factor of fully dedicated VR devices such as the Oculus.

Why companies need to invest

The interest in VR and AR and the imminent wave of next generation products will drive mass consumer adoption to these platforms in the next several years. Companies interested in leveraging virtual and augmented reality to engage, market, and sell to consumers need to start investing now—just look at how fast the Internet became the new platform for marketing and commerce in a short amount of time.Several companies and industries are already starting to take advantage, including:

And since Facebook invested $2 billion in Oculus, VR and AR are also poised to become the next big thing where social engagements and commerce interactions take place.There is no doubt that we are all moving toward uncharted territories with virtual and augmented reality, and that’s precisely what makes this time so exciting. If a company's AR and VR decisions and courses are charted correctly, the rewards and potential for innovation using these technologies is tremendous.