On:
Customer Experience
On:
Digital Transformation 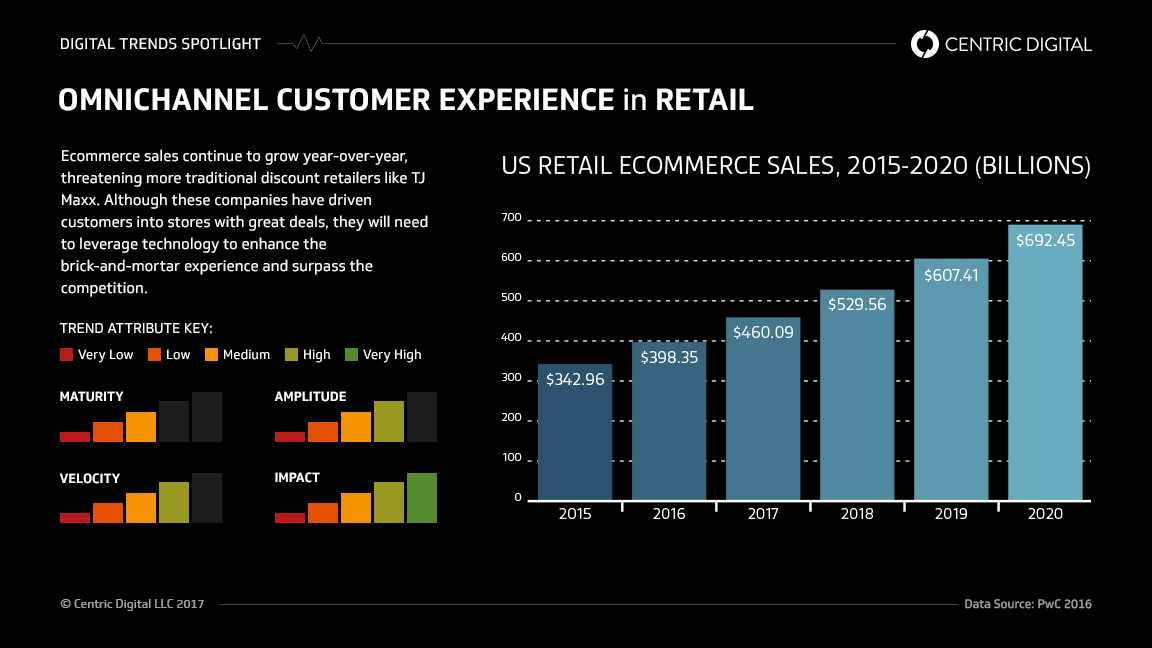 Even as latecomers to the competitive digital marketplace, retailers can craft their entry point to create an exceptional omnichannel customer experience by meeting the leading edge of millennial expectations.Though we're deeply embedded in the digital era, some retail organizations still have not yet fully adapted to ecommerce. TJ Maxx is a perfect example of these holdouts, as it continues to emphasize its in-person consumer experience and in-store shopping above ecommerce. Eventually, these stores will have to define their digital presence. How can they make that transition in a way that won't alienate their current consumers? How will their late-blooming digital transformation unfold differently than that of their early-adopting competitors? A solution that leverages digital to complement their in-store appeal and incorporates multiple channels - like mobile - to create new experiences will allow TJ Maxx to retain their competitive advantage while appealing to digital and tech-first audiences.

Where Is Ecommerce Today?

Ecommerce has already transformed the retail industry, and it is still in the early stages of monumental growth. Online sales in the 2016 holiday season reached $91.7 billion nationally -- double-digit growth over last year. Forrester predicts that annual ecommerce sales will exceed $530 billion by 2020, with more than 206 million shoppers spending money online. In 2016, Cyber Monday set an online sales record of $3.45 billion, and throughout Black Friday weekend, more people shopped online than in physical stores.

Amazon maintains its leadership in online sales, with no looming slowdown in its astounding growth. In 2015, the online giant accounted for nearly 60 percent of online sales growth in the United States and achieved a year-over-year growth of $23 billion in sales. Although not primarily considered a clothing retailer, Amazon is now the biggest online seller of apparel in the U.S., with apparel sales of $16.3 billion in 2015. Meanwhile, many traditional brick and mortar stores, especially department stores, continue to struggle. Macy's and Kohl's saw sales sink by 2.7 and 2.1 percent, respectively, in 2016. To make up for these revenue losses, Macy's announced at the start of 2017 that it would cut 10,000 jobs and close 68 stores.

Despite the prevailing statistics, TJ Maxx has taken a brick and mortar-first approach and is winning. Its physical locations are showing an increase in sales as well as foot traffic. In the third quarter of 2016, the company posted a 5 percent increase in sales, handily beating average analyst estimates. The company's recent marketing has been so successful that it has increased its media spend by 40 percent since 2011. TJ Maxx's success comes despite minimal digital investment; its stores Marshall's and HomeGoods have no ecommerce offering, and while TJ Maxx did launch an ecommerce site in 2013, its online sales represent only about 1 percent of total sales. According to a January 2016 filing, online sales had an "immaterial impact" on TJ Maxx's growth.

Part of TJ Maxx's success comes from appealing to consumers who are increasingly conditioned to expect discounts. A survey by First Insight found that almost half of women must see a markdown of 41 percent or greater to even enter a store, and 39 percent of consumers are willing to travel to another store to seek a lower price. A previous study by First Insight found that on average, across all women's wear categories, consumers were willing to pay only 76 percent of full price. So far in 2016, off-price shoppers account for 75 percent of apparel purchases across all channels.Digital is partly to blame for the rise of the discount-conscious consumer, as ecommerce and digital tools have led to greater price transparency across brands and regions. Upscale department stores have tried to emulate the TJ Maxx formula by investing more in their own discount offshoots. Saks Fifth Avenue has opened 18 new Saks Off 5th locations in the past two years and closed one of its namesake stores, while Macy's has debuted an off-price outlet called Macy's Backstage.

While TJ Maxx has been able to achieve success without a strong digital strategy, it will inevitably need to acknowledge growing trends and define an approach to digital in order to maintain its competitive edge. Millennials are currently the largest demographic in the United States, with growing wealth and expendable income, and this demographic expects seamless digital experiences. According to Robin Lewis, CEO of retail strategy publication The Robin Report, "Millennial consumers are rapidly emerging as the largest consumer segment. They're equipped with technology and they know how to use it, and they're driving huge strategic and structural changes across all ... consumer facing businesses." Ray Hartjen, director of marketing for RetailNext, adds, "Maybe more importantly, the segment is influential as a role model for other segments, both older and younger, on how to incorporate technology to best fit their lifestyles and shopping missions. As a group, millennials have different expectations as to their control of their shopping experiences ... and as such, they're changing."

Mobile Is Merging With Physical

A second trend that's forcing legacy holdouts into the digital era is the rise of omnichannel consumer, as technology erases the boundaries between the physical and online worlds. Consumers spend 40 percent of their time while in retail stores on their phones. Commenting on this phenomenon, Emily Bezzant, head analyst at retail technology platform Edited, says, "As shoppers are more tied to their mobiles whilst in stores, retailers are introducing new ways of engaging customers on their phones, mostly by providing real-time in-store coupons, gifts and personalized recommendations." Hartjen adds, "[Mobile] underscores the importance of converging all channels and touchpoints into a single, seamless, branded shopping experience. Mobile is not only the key to reducing friction in the shopping journey, but it's absolutely critical for personalization and customizable experiences."

A big part of TJ Maxx's advantage is the draw of its in-store experience. In response to limited inventory, TJ Maxx customers are enticed by the feeling of an in-store "treasure hunt" for the greatest bargain or one-of-a-kind item. A seamless omnichannel strategy can help TJ Maxx keep the unique sense of shopping excitement that makes the brand competitive while adapting to meet growing digital and mobile expectations.The new omnichannel approach to customer experience means that TJ Maxx and other late adopters will find digital innovations more compatible with their physical stores. Many technological approaches are now being used to merge digital and physical experiences. For example, "click-and-collect" shopping allows customers to purchase online and pick up in-store. Retailers such as Kohl's and Forever 21 are experimenting with this model, and Sam's Club uses mobile notifications to alert customers when their orders are ready for in-store pickup.Location-based technology, such as beacons, can enable more personalized experiences for customers in stores, as it allows retailers to track and analyze shopping patterns and provide custom offers or guidance on mobile.Mobile payment options provide improved ease of checkout in stores and also support rewards programs, as in Starbucks' mobile app. At the end of 2016, industry analysts predicted that there would soon be more than 400 million mobile payment users worldwide, and Business Insider estimates that by 2020, mobile payments will account for $503 billion in sales. On average, these technologies take only 50 percent of the time needed for conventional card payments, streamlining the customer checkout experience.Companies such as Burberry and Apple are equipping their stores with personalized fitting rooms and touchscreen kiosks, while Rebecca Minkoff tested a new self-checkout technology. In 2013, Kate Spade experimented with interactive, shoppable windows and same-day delivery. Other digital retail trends include augmented reality mirrors and QR or bar codes that provide content when scanned. All of these digital technologies, when integrated into the in-person shopping experience, aim to "eliminate friction and pain points from the shopping journey."

While Ad Age observed that TJ Maxx's "in-store destination strategy also protects it from the encroachment of ecommerce giant Amazon," this is no longer the case. Even as brick and mortar stores are losing ecommerce business to online retailers, those online outlets are expanding their markets by opening physical locations. Amazon, Fabletics (an "athleisure" ecommerce company), Rent the Runway, and eyewear retailer Warby Parker have all begun opening brick and mortar stores -- each with plenty of digital flash and dazzle.TJ Maxx has cultivated a unique in-store experience that appeals to discount-minded consumers, maintaining financial strength where many brick and mortar locations have failed. As a latecomer into the competitive digital marketplace, TJ Maxx can leverage digital experiences to create a unique omnichannel customer experience. It appears that the retailer is already exploring the impact digital can have on its in-store experience, as it is experimenting with installing digital displays and directories, free Wi-Fi and Charge-It-Spot kiosks in a limited number of stores. In this way, the retailer will meet the leading edge of millennial expectations while retaining its signature in-store sense of excitement.