Where Digital Strategy Is Heading for 2017 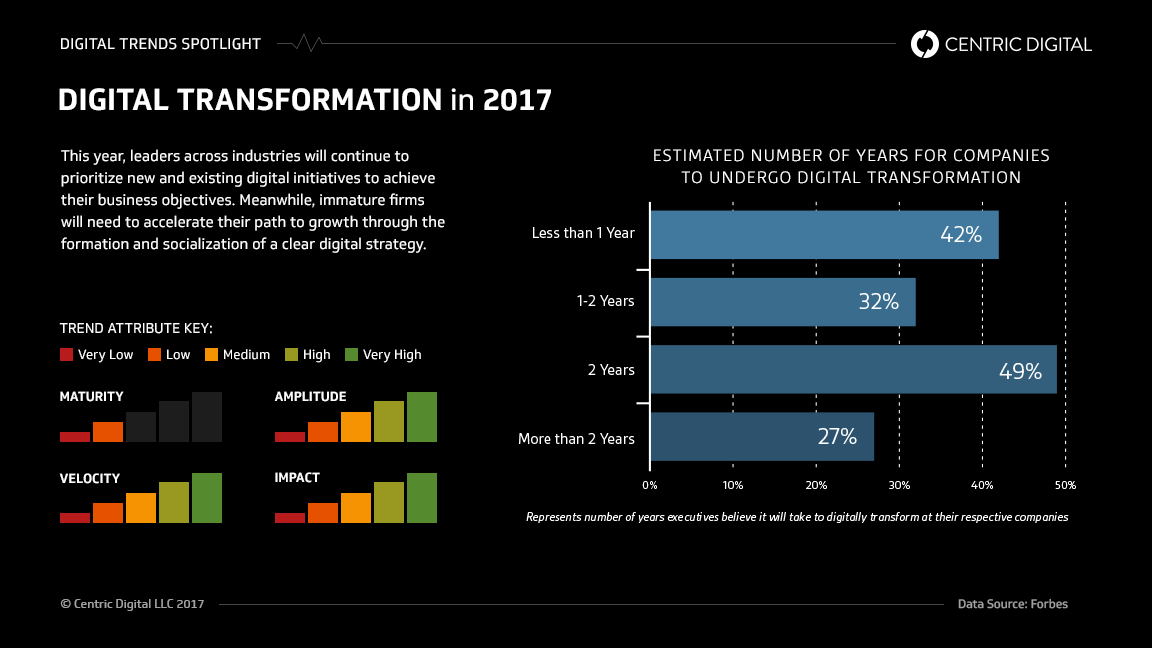 The challenge for legacy companies will be to focus on improving the holistic customer journey, rather than implementing disconnected new technological solutions. In 2017, newer and more advanced technology will build on these foundations, as early adopters capitalize on the first-to-market advantage.

Where Digital Is Going in 2017

In 2016, we predicted that cloud computing, mobile, advanced data analytics and artificial intelligence would become mainstream. These technologies are now embedded in many companies' digital strategies and should be considered key approaches to master in order to maintain a competitive edge.In 2017, newer and more advanced technology will build on these foundations, as early adopters capitalize on the first-to-market advantage of fulfilling customer expectations. These are the trends and the technology we anticipate will have an impact on digital strategy in 2017:

Customers Are More Fickle and Demanding

Customer expectations will continue to rise in coming seasons, as people increasingly take for granted that the brands they interact with will organically appear on all mainstream mobile and social platforms. More than one-third of U.S. adults online want new and engaging digital experiences, according to Forrester research, and their allegiance readily serves in the direction of digital novelty.Brand loyalty was once governed by the customer's direct experience with products. Now, the quality of a user's digital interactions with a vendor is mingled with the actual value of products. When their digital expectations are not met, customers are quick to shift the direction of their spending. This trend will only accelerate in the year to come.

The Risk of Falling Behind Can Be Quantified

The gap is already widening between companies with true digital mastery and those that still hesitate to embrace new technology. The risk of falling into this gap is measurable in plain numbers. Forrester research finds that "40% of consumers have a high willingness and ability to shift spend, with an additional 25% [in the process of] building that mindset."Another survey, comprising responses from over 2,000 U.S. shoppers, found that 21 percent would be interested in switching brands if a competing retailer offered better payment security options, such as fingerprint sensors on mobile payment apps. Another 18 percent stated that they could be lured away by coupons and discounts offered on social media networks, while 9 percent said they would switch if another retailer offered in-store mobile payments such as Google Wallet.

Keeping in mind the hazard of disappointing customers, competitive companies will need to undergo a pervasive transformation, redefining themselves as wholly customer-centric. Instead of an approach that starts with internal efficiencies and then moves outward to consider the needs of customers, companies have to flip the paradigm and operate on an outside-in approach. The customer's needs must become the fundamental driving force, and social referrals by brand advocates will be a significant business asset.

In more regulated industries like finance, legacy companies will need to partner with or acquire fintech or insurtech startups in order to facilitate greater access and more streamlined experiences for their customers. The challenge for finance will be to focus on improving the holistic customer journey, rather than implementing disconnected new technological solutions.Paul Mandeville, CPO of QuickPivot, reports in FinTech Weekly that over half of all banking customers "did not feel their bank knows them as a customer." Mandeville's solution to this situation emphasizes the need for a "ground-up approach" that will "connect the dots across multiple channels, resulting in more accurate and relevant communications between a financial institution and its audience."

A new concept of the customer experience is emerging -- one that is focused on identifying and perfecting the most powerful points of contact. These "micro-moments" are brief, critical interactions with customers. They are those points in the customer journey when people feel the most anxious or are paying the closest attention.These micro-moments represent an opportunity because they are the small fulcrum points at which the customer's entire experience can be tipped in one direction or the other. Forrester emphasizes what it calls "microdesign," the goal of incorporating these moments into a digital strategy because they "deliver the best and most authentic part of your brand."

We may also see brands adventuring into a little-explored area of the customer experience: the quantification of emotion. Some retailers are experimenting with emotion-recognition techniques to understand and measure customer reactions to interactions, and they are using that data to improve experiences. These techniques are based on facial recognition, which is undergoing a sudden boom in development. Futurist Chris Riddell highlights this technology as being part of the future of retail, and he estimates it will generate an income of $6.5 billion by 2018.Our faces reveal a lot about us, but until recently, the primary interest in this technology came from social platforms like Facebook and various arms of law enforcement. Now, retail is discovering uses for identifying facial expressions, and cutting-edge corporations are taking notice.In January of 2017, Apple purchased San Diego startup Emotient, which has innovated new technology for accurately reading emotions from facial expressions. While Apple is not revealing its intent in buying this company, TechTimes speculates that its future will center on retail, enhancing business growth by informing marketers about in-person customer reactions.

Augmented Reality (AR) was already making inroads into the retail world when it got a big boost from the Pokemon Go explosion. In 2017, AR will continue to find practical marketing applications, while Virtual Reality (VR) will entice more exploration.Virtual Reality will continue to garner a lot of attention and create exciting opportunities for customer engagement, but it will not come into popular use in 2017. Goldman Sachs predicts that while VR will eventually disrupt industries from healthcare and education to retail, the impact will not be substantial until 2020-2021, as the technology becomes more advanced and the consumer price point descends. Goldman's enthusiasm for VR's long-term prospects is powerful, though. Its analysts "believe VR/AR has the potential to spawn a multibillion-dollar industry, and possibly be as game changing as the advent of the PC."Augmented Reality, however, has more immediate possibilities. Instead of introducing users to an entirely new world, AR creates new experiences by placing a digital layer on top of the world around us - and it's all accessible by way of the user's phone. The International Business Times predicts that "Augmented Reality will dominate 2017," as businesses experiment with AR applications and create signpost use cases. Forrester declares that by 2021, a full transition period will be in place "between separated and tightly blended physical and digital experiences in our work and lives."

Artificial Intelligence (AI) will be embedded into numerous daily use applications, as it powers chatbots that allow for on-demand customer service. "Nearly every messenger platform today has (or plans to launch) a chatbot solution," according to Ogilvy & Mather, introducing what they call a "chatbot gold rush."Their research finds that in Q1 of 2015, the number of monthly active users for the top four messaging apps surpassed monthly active users for the top four social networks for the first time. As messaging increasingly becomes the consumer's preferred form of communication, business use of AI-powered messaging services will surge. Some retailers have already begun with sending orders and shipping confirmations via Facebook Messenger rather than email. In the future, this could expand to personalized shopping recommendations and query responses. Artificial intelligence will enable brands to support this level of one-on-one communication with consumers at scale.

The Internet of Things & Security

Although the consumer marketplace is still awaiting "the killer IoT app," interest in connected devices like wearables and smart TVs is growing. Enterprise embrace of IoT offerings, such as intelligent voice-activated assistants, is expected to surge in 2017, and IoT software will power solutions across a growing architecture of cloud services, gateways, and smart devices.While the IoT will result in a further explosion of new data, empowering contextual insights, it is simultaneously creating new security risks. The IoT creates device vulnerabilities that can be can be used to propagate new attacks - Forrester points out a recent hack that shut down 1,600 major websites is only "the tip of the iceberg when it comes to using connected devices to do harm." It even predicts that "a Fortune 1000 firm will go out of business... following a security breach" opened by IoT vulnerability.

Following the buzzy launch of Twitter's Periscope at SXSW in 2015, live video has slowly been growing in popularity. When Facebook announced its live feature for all users in April of 2016, backed by a large advertising campaign, it initiated a race among social networks to launch and corner the live video market.Instagram, Periscope, YouTube and Microsoft's Twitch are all competing in the space, while early steps are being taken in the world of live 360-degree streaming. YouTube is currently the leader in this immersive technology frontier, but users who want to experience it need special encoder software on their computers. Facebook and others are close behind, launching special user experiences that are more readily accessible.2017 will see the definitive impact of the digitally-empowered consumer and a growing gap between innovators and the traditional business model. The pace of competition is growing exponentially, and consumers are setting the bar for brand experiences. A coherent, well-supported digital strategy is an essential component of every business plan in 2017.