How Retail Is Mastering the Omni-Channel Customer Experience 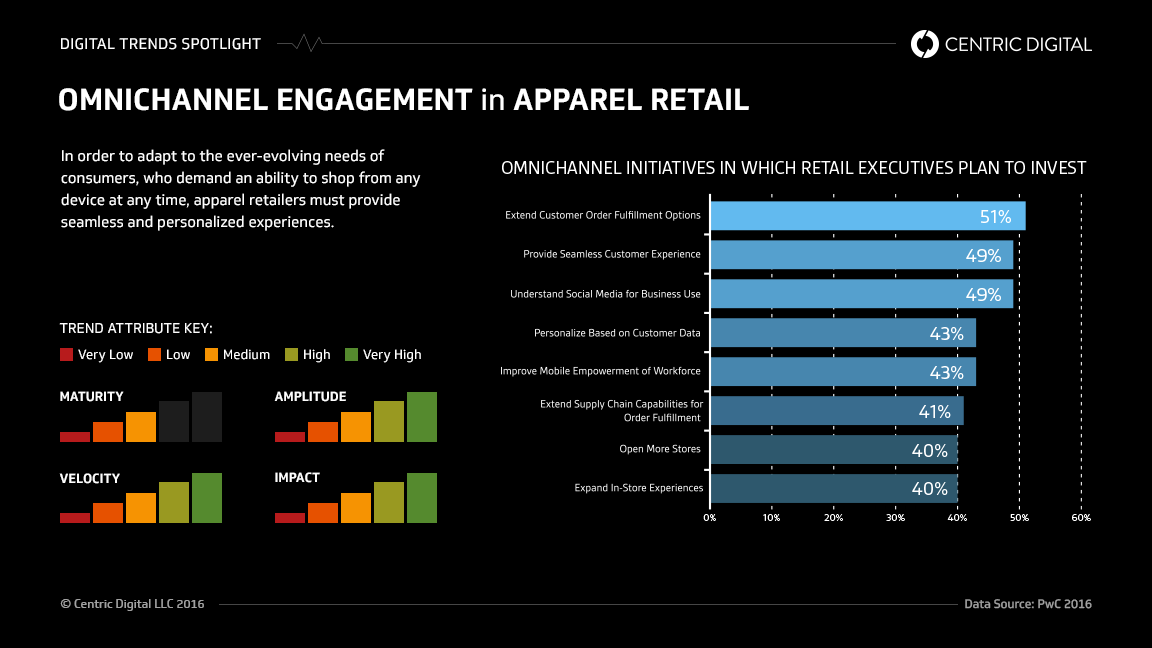 The apparel sector has always thought itself to be somewhat immune to competition from Amazon, but now there's a profound change happening in retail that the industry cannot ignore.Digital is set to disrupt apparel, just as it has disrupted books, media distribution, photography and dozens of other industries. If your apparel company is going to compete in the rapidly changing retail landscape, you have to turn your business model on its head. The time for timid experimentation is long past, and bold moves must be made. At the same time, though, those bold moves have to be executed with a savvy knowledge of the potential hazards. Jump into digital without laying the proper groundwork, and you could find yourself falling into the trap that caught Ron Johnson. Read on for his story and the lessons it holds.

In the first quarter of 2016, the number of people purchasing clothing on Amazon increased by 19 percent year over year. Meanwhile, apparel purchasers at top retailers Target and Walmart declined by 5 percent and 1 percent, respectively. Macy's, currently the nation's No. 1 apparel retailer, reported a decline in first-quarter 2016 sales of over 7 percent--and this report sent their stock price plummeting to a four-year low. The Gap and other traditional apparel stores are following the trend, with lower-than-expected earnings in 2016. Amazon, by contrast, reported first-quarter sales figures that exceeded expectations, showing its highest growth in sales in four years in April.

Retail has always been tough, and it's only gotten tougher in recent years. A Business Insider analysis states why: "Retail has high fixed costs, high working capital intensity, fickle customers, low barriers to entry." Traditional retailers have been slowly losing ground to Amazon ever since it opened in 1994. The apparel sector, however, has always thought itself to be somewhat immune to competition from Amazon, as the sensory in-store experience appears so central. Now this retail sector may be the next target, with Amazon expected to become the nation's largest apparel retailer by 2017.Analysts at Stifel, writing in MarketWatch, commented on the struggle within traditional retailers to adjust to the new environment: "Consumers visit stores less ... and instead shop and buy online. However, they are not buying enough [from traditional retailers' websites] to offset the falling store sales ... we are convinced that stores remain an important component of apparel retailing, but recognize that an equilibrium must be found between stores and online."

A Historic Failure Slows Down Change

Some forays into "e-tail" by apparel makers have fallen short of expectations. These serve as cautionary tales, giving you fair warning that change must have full buy-in throughout a traditional management structure. One heavily publicized tale of a digital transformation gone wrong is Ron Johnson's takeover at the helm of JCPenney. Freshly arrived from a triumphant run as Apple's retail guru, Johnson took over at JCPenney in 2011 with radical ambitions to remake the 114-year-old apparel brand. At the end of his 17-month tenure, JCPenney sales had dropped from $17 billion to $11 billion, 40,000 employees had been fired, dozens of stores had been closed and the company struggled under an increased debt load as its share prices landed in the basement. As Fortune puts it, "Penney alienated its traditional customers without attracting new ones." Meanwhile, Johnson commented in 2016, "When I got to Penney's, I had no choice because I was told people wanted change, but the truth is nobody wanted change."Ron Johnson's missteps at JCPenney left the whole apparel industry gun-shy. Rather than learning from those mistakes, the industry took the episode as a sign to steer clear of any such radical departures. Instead, they doubled down on doing what they already knew how to do in a mature, well-understood market. Johnson's failure may have been the biggest stroke of luck Amazon has seen.

Now that a couple of years have passed since Johnson left, JCPenney has actually put in place many of the changes he recommended. These innovations prove that the digital transformation itself wasn't the problem--it was just not executed as skillfully as it needed to be. After the fact, there are many cautionary tales wrapped up in the JCPenney saga: Perhaps the problem was trying to institute a whole new structure under the reluctant guidance of traditional management, or not studying the things that had historically worked for the retailer. Or perhaps the transformation didn't get the right buy-in. Or maybe you can't run a company with 159,000 employees like a startup. Explaining the failure of Johnson's revamp still provides plenty of grist for marketing analysts and MBA students--but the bottom line is that now many of the digital innovations that he envisioned for JCPenney have actually been put into place.Ron Johnson's vision is just as accurate now as it was in 2011: "A store has got to be much more than a place to acquire merchandise. It's got to help people enrich their lives. If the store just fulfills a specific product need, it's not creating new types of value for the consumer. It's transacting. Any website can do that. But if a store can help shoppers find outfits that make them feel better about themselves, for instance, or introduce them to a new device that can change the way they communicate, the store is adding value beyond simply providing merchandise. The stores that can do that will take the lead."

Shared Values as Part of the Experience

Instead of trying to beat Amazon at its own game, you have to make sure that your apparel brand offers something Amazon can't. Bayard Winthrop, another successful Apple alumnus, has created a disruptive model for apparel retailing that's experiencing a sustained wave of popularity. His startup, American Giant, makes high-quality leisure wear that sells like hotcakes via the company's website. Winthrop believes that aligning with customers' core values is the key to long-term loyalty: "If I do my job well and build relationships over time, I can thrive," he says. "There's a profound change happening in retail, a reshuffling of the industry." Awarded status by Fast Company as one of the "50 Most Innovative Companies in the World," American Giant is proof that the innovative tech formula can be successful in the apparel business.

Success Is Still About Customer Experience

Is the moral of American Giant's success that online merchants are the only ones with a chance at long-term survival? Definitely not; Nordstrom is a stellar example of an old-school retailer with cutting-edge savvy. Known for its exceptional attention to customer service, Nordstrom has successfully transformed that tradition into an omni-channel customer experience. Founded in 1901, this venerable brand has seen its sales increase from $8 billion in 2009 to $14 billion in 2014, and it is reputed to have the best sales per square foot performance in the entire large-scale retail industry.

How did Nordstrom escape the Amazon undertow currently sinking Target and Macy's? It's a great place to work, so its employee turnover is low, its employees are happy and therefore they're more likely to reach out to customers and make sure their experience is good as well. Also, employees are individually empowered to make decisions regarding customer needs. Most importantly, however, Nordstrom decided to become an industry leader in providing an omni-channel customer experience.Millennial customers are attracted by the ability to purchase Nordstrom's items instantly on Instagram. In addition, the store features its own "flash-sale" site, HauteLook. On that page, shoppers can also find a link to the store's mobile app, with a special focus on the more affordable Nordstrom Rack selections. In-store display decisions are based on social media input from Nordstrom's Pinterest page. The high levels of in-person customer service are expressed through well-integrated POS (point of sale) software, customer relations software and an effective product information management system.

Physical and Digital Must Be Integrated

People still like physical shopping. While increasing numbers of people praise the convenience of buying familiar brands on the web, many shopping enthusiasts say that sitting in front of a screen will never replace the fun of being out and about. Physical stores must be transformed into digitally integrated showrooms, in which customers can seamlessly connect with inventory, rewards and promotions.

Depending on the nature of your brand's identity, you will pick and choose among the growing selection of digital components to create your unique customer experience. Two examples of such applications that are useful almost everywhere:

There is no longer a distinction between online and offline retail. Now, you're just a retailer, and your transactions will occur in every environment: mobile, desktop, in-store. The key strategy is to develop a healthy symbiosis between your e-commerce and your digital store so it all flows effortlessly. Your customers have a consistent omni-channel experience while your 360-degree view of the customer journey forms the basis for your 21st-century success.