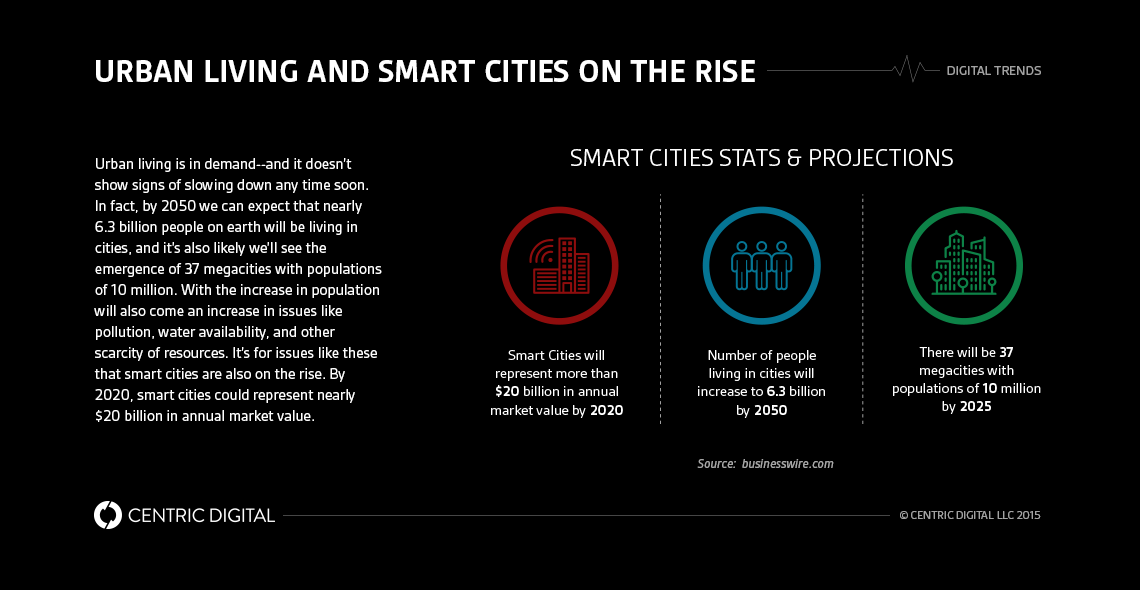 Can New York and Chicago’s smart city projects improve quality of life and solve the impending massive infrastructure strain for urbanites? These days, city living has never been more popular. According to the World Health Organization, urban citizenry accounted for more than half of the world’s populace in 2014—and by 2017, it’s estimated that the majority of people will live in urban areas, even in less developed countries.As urban population growth continues to gain momentum, forecasters are projecting city-living will outstrip global population growth by 2030. As these numbers reach new heights, simply building more high-rise towers in every city around the globe won’t be enough to solve the impending infrastructure strain.Cities need to become more adaptable and structurally sound—basically, cities must become smarter. With the rise of the digital age and the explosive growth of the Internet of Things industry, the implementation of smart cities allows these metropolitan areas to adapt to new challenges. From the ordinary, everyday concerns like parking availability and trash collection to the more pressing concerns such as water scarcity and environmental monitoring, the smart city revolution is certainly on its way.Here in the U.S. both New York City and Chicago are taking big steps forward in terms of channeling resources and energies into become smarter.

The recent partnership between the NYU Center for Urban Science and Progress and the planned New York Hudson Yards project is a big step for the Big Apple. These partners plan to develop 17 million square feet of commercial and residential land and make it smart. Once complete, this development will have the ability to track data on energy production and consumption, air quality, pedestrian traffic, and health and activity levels. In terms of scope (and arguably, significance), this project rivals that of Rockefeller Center—and the infusion of 21st century technologies could not be more pivotal. This project could (and should) set the pace for all future NYC development projects as it will help improve the quality of urban living.

Meanwhile, the Windy City is also looking to get smarter. What started as a failed workshop for high school students became a major project to insert data sensors across the city. The Array of Things project has sensors that are collecting data on everything from sound intensity to barometric pressure. These sensors also specify which gases they’re detecting, whether it’s ozone or nitrogen, which gives the city a better idea of where the pollutants are coming from. The more information the city collects, the better it can diagnose where the problem is.

Smart City Initiatives in the U.S. and Abroad

Along with major developments in New York and Chicago, which rely heavily on IoT tech, the emergence of smart cities as the technology base of the future innovation was all the talk during this year’s SXSW in Austin. Seven U.S. cities were named finalists for a $50-million funding round aimed at improving cities’ “intelligences” via the Department of Transportation. These cities are chasing after innovation in the ways cars interact with city infrastructure, weather conditions, bad traffic and road closures, and more.

While all of this forward movement and innovation is positive, there is also some risk involved. Smart city projects can lose sight of why cities became the home of the industrial, technological, and sociological revolutions of the last few centuries: The people themselves. Technology can only do so much to ensure that those equipped with the information know what to do with it. This technology comes with warnings abound about cities that take all of this knowledge, only to empower the corporate giants of the new “sharing economy” to rule what would otherwise be a thriving, diverse and truly alive city. However, smart cities can only be as smart as those operating them. This is something 2015’s smartest city, Barcelona, knows all too well. The uptick in tech has led to a deluge of companies looking to be the latest and greatest for the Spanish hub, which has led some to bemoan the lack of standards and practices in this new era of city planning.Cities have long been the centers of culture and economic and cultural diversity. Keeping up with rapid population growth will not be easy, especially for the world’s biggest cities—like New York and Chicago. IoT and the smart city concept will be one of the keys to shape the future success of the world’s cities, but planners and developers must be cognizant about how they share and pass information—some of which will still need to be done face-to-face. Without the people themselves, there’s less importance to maintain the cities as they grow. So it’s important that while technology grows and adapts to help cities survive the rest of the 21st century, the people themselves aren’t left far behind, wondering what happened to the thriving, living city they’ve known for so long.