4.5 Million Internet of Things Developers by 2020 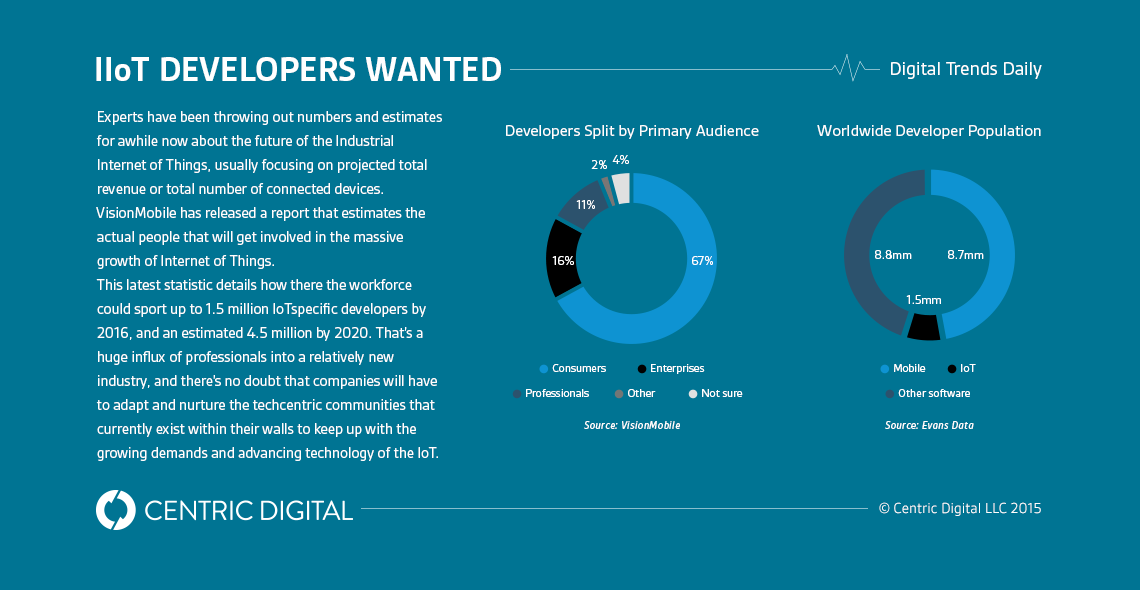 Experts have been throwing out numbers and estimates for awhile now about the future of the Industrial Internet of Things, usually focusing on projected total revenue or total number of connected devices. Now, however, VisionMobile has released a report that focuses on the actual people that will get involved in this massive growth.This latest statistic is no less striking than the others, detailing how there the workforce could sport up to 1.5 million Internet of Things developers by 2016, and an estimated 4.5 million by 2020. That’s a huge influx of professionals into a relatively new industry, and there’s no doubt that companies will have to adapt and nurture the tech-centric communities that currently exist within their walls to keep up with the growing demands and advancing technology of the IoT.

Lessons Learned from the Smartphone Revolution

One big takeaway from the smartphone revolution was that Google and Apple weren’t both ridiculously successful just because they produced high-quality products, but also because they created a massive network of capable entrepreneurs to serve as the backbone of the entire operation. It was this matrix of actual people — not one single company — that generated such a colossal demand for the consistent and continued development of new and innovative apps.Take indie developer (and cautionary tale) Dong Nguyen, the creator of “Flappy Birds,” who quickly started raking in an alleged $50,000 a day in ad revenue. Not only do developers have the skills and tools to shape and dictate the app marketplace, but also the motivation and incentives to keep up the good work. With these developers soon to establish themselves as the key drivers of another revolution — this time in the IoT — companies need to start focusing on consolidating and then growing happy and productive tech departments of if they want to stay relevant.

A recent report from Gartner predicted that 4.9 billion connected “things” will be in use in 2015, with that number rising to as high as 25 billion in 2020. If these numbers are even remotely accurate, then we can plan on a proportionally colossal increase in the number of developers devoted to creating the actual platforms to run on these devices. As such, consumers, companies, and cities have to start looking for ways to invest now in Internet of Things technology if they want to keep up with the market -- and that starts with the talent driving it.This entrepreneur-driven demand makes it clear that clever players in the IoT game will reap huge benefits if they start leveraging their developer communities and encouraging them to produce the most innovative apps and platforms out there — it will be these individuals and their ideas that ultimately make a product or piece of hardware shine. If developers embrace the Internet of Things boom as seamlessly as they did with Android and iOS, then there’s no doubt that smart companies who start building their professional communities now will be leading the charge in the imminent IoT takeover.