Impactful Applications of Augmented Reality and VR in Education and Government

On:
Augmented Reality
On:
Virtual Reality 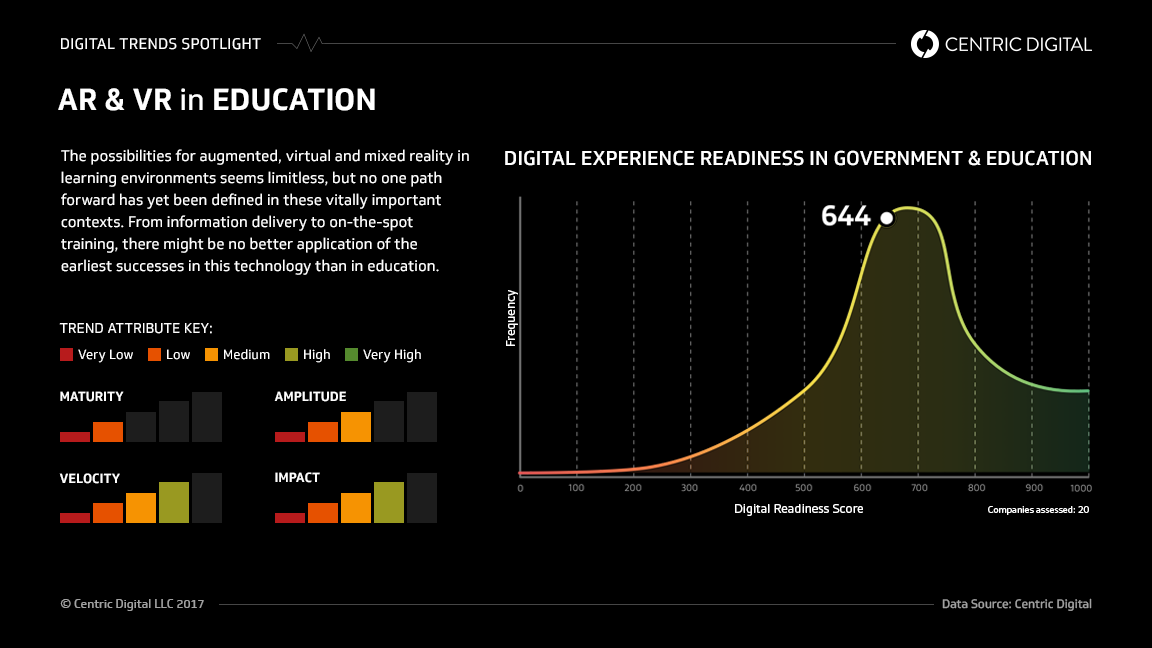 Augmented reality and virtual reality have been the "just around the corner" technologies for decades. Companies have made big promises that haven't come to fruition; indeed, Tech Republic articulates the development trajectory with this comment: "There's a graveyard of virtual reality projects that have fizzled, failed, and flopped at various stages of existence." The classic example of VR falling short is seen in the visionary rise of the company VPL, which developed the first "DataGlove," head-mounted display, and full-body "VR capture suit" in the 1980's. It sold its systems for hundreds of thousands of dollars, but by 1993 it had declared bankruptcy. Another example was Google Glass, an augmented reality headset offered to beta users for only two short years before the project was pulled from the consumer pipeline.For the digitally-focused public, the explosive growth of the internet in the mid and late 1990's eclipsed virtual reality, and "the death of VR" became a commonplace story. Mixed reality was too enticing a prospect to walk away from entirely, however. In 2014 Facebook paid $3 billion for Oculus, maker of the Oculus Rift VR headset, even though it has yet to carve out a niche in the market for this technology. Google Glass has also been resuscitated in an "enterprise edition," and in July 2017 Wired proclaimed that "Google Glass 2.0 is a startling second act." It is important to note that Google Glass EE is still in its early stages of implementation and features, and has a long road ahead in bridging the gap between the user’s experience as well as overall business application, but the fact that Google is giving Glass a second swing shows how highly they value investment in AR technology.With the exponential acceleration of digital technologies and the proliferation of smartphones, augmented reality and VR are finally poised to have a real impact on critical aspects of our society. The Next Web (TNW) states that "Mixed reality will be the most important tech of 2017," and IDC projects that both augmented reality and virtual reality revenues will reach $162 billion by 2020 (from just $5.2 billion in 2016.) The advent of increasingly capable smartphones, together with inexpensive headsets like Google cardboard, have opened a new era for all kinds of digital reality.

What is Mixed Reality?

More than simply a catch-all phrase for VR and AR, "mixed reality" denotes the growing sophistication with which the new era of technology is approaching this topic. TNW calls mixed reality "a hybrid of both AR and VR." More advanced than either of its precursor technologies, mixed reality makes use of next-generation computing power as well as advanced sensors and optics. Unlike traditional VR devices, mixed reality can sense where a user is in the real physical world. Unlike classic AR applications, however, mixed reality offers an immersive 3D experience rather than merely overlaying digital content on a smartphone's camera window. Users can interact with realistic holograms using gestures and sound.

Centric Digital has talked about AR applications for healthcare and smart cities, but the application of new reality technologies truly has no limits. Every aspect of society will be transformed by the ability to erase distance and interact with information in unprecedented ways. Even the slow-moving sectors of education and government are primed to embrace these new technologies to improve the experiences of students and citizens.

A New World for Educators

Education is being transformed by digital. In the twenty-first century, educators have moved away from rote memorization and now focus on ways to encourage critical thinking and problem-solving. The arrival of digital technology in the classroom has dramatically transformed the learning process, bringing students into an unlimited world of hands-on holistic experience. Through the lens of mixed reality technologies, students can manipulate objects that are too small, too distant, or too dangerous to actually touch in the real world.

The flexibility of location is one of the biggest advantages of AR and VR technology. Digital classrooms and web-video education have exploded via websites like Coursera, Udemy, and MIT. Augmented and virtual reality with continue to expand the remote education trend, deepening student engagement and enabling live classroom interactions regardless of geographic location. "Field trips" to outer space or to the ocean floor can be effortlessly arranged, as well as to unfamiliar parts of the globe. Meanwhile, students and teachers can interact and collaborate even if they are located across the world from each other. Students in health care facilities, underdeveloped rural areas and even in prison are now able to join classmates in an immersive virtual classroom.The U.S. Department of Education has launched an Ed Sim Challenge, in which the tech community is invited to compete for prizes for introducing the most innovative immersive augmented and virtual reality educational experiences. Below are just a few examples of the ways in which the whole learning process is being improved by digital:

Government institutions share many of the same gaps and opportunities that educational facilities do - including the sluggish response to change. However, even in government, the tide is turning now, and the General Services Administration has recently assembled a Digital Government group. This team is working on implementing VR and AR across a range of government settings, and to this end, it has developed several working sub-groups. These include two government-side communities, entitled "Artificial Intelligence for Citizen Services," and "Virtual/Augmented Reality." These groups bring tech experts from the private sector together with staff from over 50 agencies to create workshops and brainstorm together about how to disrupt government's "business-as-usual" approach. State governments are following suit: At a "Government Transformation Conference" in Sacramento, California last winter, Dr. Gregory Curtin, founder and CEO of Civic Resource Group, stated that "There are already profound use cases for AR in the public sector."The extent of changes that will take place over the coming year is widening by the month, but the following overview covers three main areas of focus:

Many essential government services involve transactions with citizens. The General Services Administration has an Emerging Citizen Technology program to make public information available via smart personal assistants like Amazon Alexa, Google Assistant, etc. According to the Digital Gov announcement, this program "includes the government-wide support of Artificial Intelligence for Citizens, Virtual and Augmented Reality, and SocialGov."

In the United States, over 20 million people are employed by the government at some level, from federal down to local. Training this vast employee population in their many job duties is one of the public sector's most expensive and time-consuming tasks. AR and VR provide virtual access to expensive capital - e.g., industrial machines, buildings, materials - and can dramatically increase government efficiency, safety, and preparedness.

Virtual reality and augmented reality can give users a much better feel for the end result of large scale building and design projects. This is ideal for large public works projects, including public parks and open spaces. Funding is easier to attain when the officials with control over the budget are able to experience an immersive three-dimensional virtual walk-through of a proposed project, complete with subjective parts of the experience such as the movement of light and shadow. As our cities continue to grow and the digital age reshapes the traffic patterns with self-driving cars, drones, and other technologies, using AR/VR to better understand solutions is valuable.Digital is accelerating faster than ever. In the words of TNW, "[Through mixed reality,] the world around you will become an entirely new canvas for you to play, learn, communicate and interact with." New interpretations of reality are transforming all industries in both predictable and unpredictable ways. Government and education are the largest and most ponderous industries in the world, but new forms of reality are providing fresh tools for improvement and blueprints for a more inclusive future.