How Traditional Banks Should Invest in and Benefit from Fintech Startups

On:
Digital Transformation
On:
Fintech 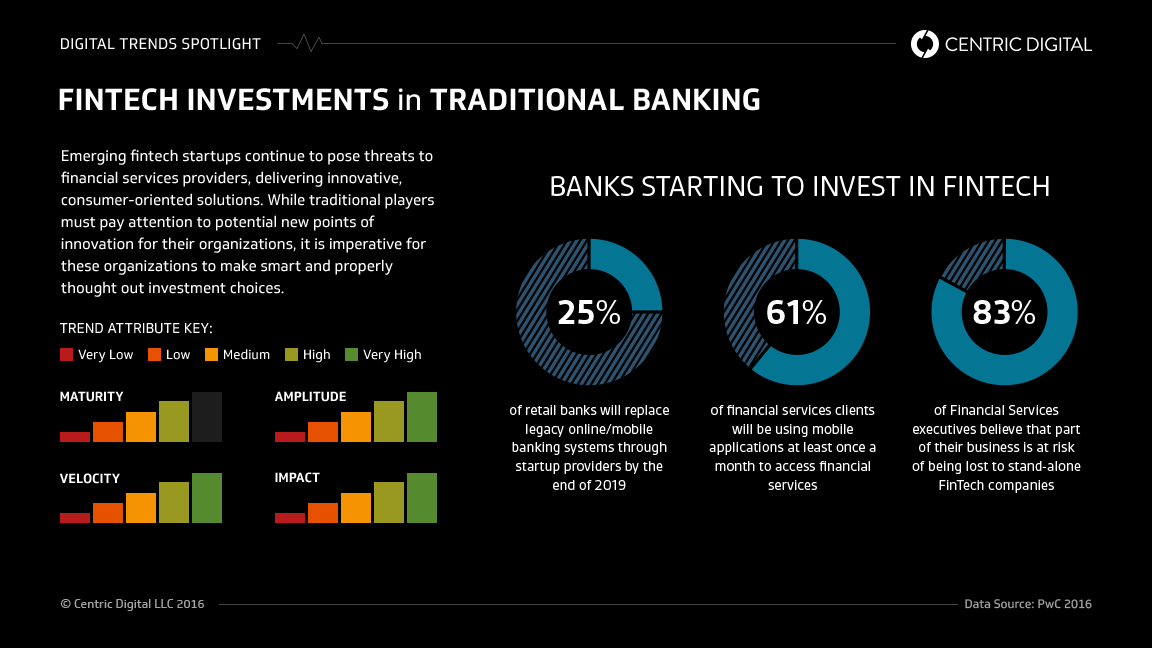 The proliferating array of fintech startups is putting pressure on financial services incumbents because these disruptors are providing innovative, consumer-oriented solutions. Their solutions "unbundle" the traditional architecture of financial products and services offered by existing institutions, and instead target specific services (e.g., payments, wealth management, personal loans) to the most relevant demographic segments.To remain competitive in the face of this emerging threat, banks are responding with a new digital strategy that initiates symbiotic partnerships with these technological disruptors. Here's an overview that will unpack this collaborative digital transformation and provide you with a roadmap to the newly integrated financial territory.

Consumers put such a high premium on seamless digital experiences that, in a recent survey, nearly 20 percent indicated they were willing to buy banking or insurance services from Google, Facebook or Amazon. Customers are increasingly open to making significant investments via online channels because they feel empowered by these transactions. Fintech firms nurture this empowerment -- and keep an advantage over incumbents -- due to the following three reasons:

The relief from having to physically transport pieces of paper from one location to another has won enthusiastic support among both commercial and retail banking customers. A prime example of disruptive convenience is Square, which offers a wrap-around service for merchants that lets them easily accept credit cards without having to undergo complex gateway registration procedures. It's worth noting that Square, with a valuation of $6 billion, has drawn investment from Citi Ventures, JPMorgan, Morgan Stanley and Goldman Sachs.Meanwhile, consumer-facing services, such as mobile remote deposit, have proven to be so appealing that it's now a basic banking expectation. Remotely deposited funds are available sooner, and it has reached the point where "banks can't afford not to deploy mRDC."

While retail banks have made more efforts in recent years to provide help and advice to their users, no amount of written words can equal the clear graphic charts provided by an app such as Mint. This app has become a one-stop financial center for millions of consumers, and two years after its launch, it was bought by Intuit for $170 million. Now, 10 years into its existence, it boasts 20 million users.

While online stock trading has been a steadily developing frontier, new disruptors such as Robinhood have streamlined and simplified the environment to a point where it's easy to access for the millions of consumers who don't have the background knowledge to engage with a more complex interface. Likewise, investment advice is now available through a growing phalanx of so-called "robo-advisors," and these are proving to be enormously popular.

Goldman Sachs, which has invested in a broad array of fintech startups, prepared a report that pointed out the urgency of a coherent digital strategy. Their report stated, "First generation online financial services companies … traditional banks, asset managers and payments companies are all working to adapt to these behavioral, demographic and technological realities. We expect partnerships, acquisitions and competition will be key to the way the vertical develops."To remain competitive in this new landscape, financial institutions are investing in emerging fintech companies through a range of approaches. These approaches include setting up in-house venture capital funds, as well as sponsoring innovation labs and incubator programs. Among a group of six major banks that have invested in 30 fintech startups, Citigroup has been the most active. Through Citi Ventures, their strategic venture unit, Citi has funded 30 startups, including Square, Betterment and Jumio.Citi Ventures and Wells Fargo's accelerator program are illustrative of how established banks are aiming to capitalize on the innovation potential offered by newer players. As a matter of fact, banks have been more prepared than venture capitalists to invest in fintech startups, according to a presentation by Devie Mohan at Barcelona's Next Bank Europe. She observes that the major areas of investment in 2015 were payment technologies and big data/analytics, although personal finance tech and peer-to-peer lending also draw considerable support. These focuses tend to be defined by their potential for competition with incumbent banking services:

This surge of investments by established banks marks an all-time high for the value of fintech deals, as well as for the sheer number of investments.

When deciding which investment approach to adopt, traditional banks should consider two questions: The first is whether their digital transformation is based on building or buying, and the second is the degree to which they plan to integrate the new offerings they support into their legacy systems.Your bank may choose to invest in a startup -- directly or through an incubator -- which doesn't promise immediate utility for your organization. Investing in a fintech startup without plans to integrate its functionality into existing bank services still offers significant benefit, simply by making your bank a player in the fintech field. By incubating disruptive concepts, banks are able to observe which innovations prove the most useful and which ones stimulate a market response.

In spring of 2016, CNBC reported a growing trend in the direction of banks opting for buyouts or partnerships with fintech companies, rather than simply staying in the background by providing startup funding. This trend may well be the natural outcome of previous seasons, in which banks nurtured and funded fintech and watched the utility of their products. The results of that research appear to increasingly lead to direct engagement with the disruptive new tools.Fintech companies are best viewed as potential partners, rather than threats, according to Deutsche Bank's Chief Digital Officer Markus Pertlwieser. By 2020, Deutsche Bank intends to invest $570 million in digital products and advisory services. They have already established a partnership with a "robo-advisor" to add choices for their customers, even though Deutsche Bank continues to also provide a full portfolio of asset management services. Pertlwieser observes that the majority of fintechs are now developing B2B solutions, and are thus an untapped resource for traditional banks.

Within this paradigm of mutually beneficial cooperation, banks are also building or sharing APIs that empower fintech partners and other developers to enrich existing experiences through mobile apps. Spanish bank BBVA has launched "Open API", which allows third-party vendors to provide complementary services to BBVA's banking customers. Similar examples are easy to spot, including Barclays' Pingit Payments APIs and MasterCard's range of Payments APIs.It's also worth noting that the startups chosen by banks for their investment dollars aren't always the most highly valued. Honest Dollar, an online service for retirement planning, had only raised $3 million in venture capital when it was bought by Goldman Sachs. BBVA bought out Holvi, a small Finnish banking services startup, as the fintech investment trend plays out worldwide.

Fintech startups offer traditional banks the crucial qualities of agility and innovation, while the banks, in turn, are able to provide startups with a solid financial basis and a ready made pool of consumer trust. Such partnerships stand to benefit both parties. Established financial institutions are able to facilitate rapid growth at scale for disruptors by providing access to vast distribution channels and an established consumer base. This is no small offering, in an industry known for prohibitively expensive customer acquisition, "Insurance," "Loans" and "Mortgage" are the three most expensive keywords in the Google AdWords universe.

Agility Is Essential for Digital Transformation

Traditional banks should define their strategy now, as the question of how to engage fintech startups will only become more pressing in the near future: Gartner predicts that 25 percent of retail banks will replace legacy online/mobile banking systems through startup providers by the end of 2019. In order to remain an appealing partner to the growing system of new fintech companies, your bank will need to develop its own internal agility in this climate of change. The symbiotic collaboration that has emerged in recent seasons cannot be relied on, as the startups increasingly recognize their own intrinsic power. David Klein, CEO and co-founder of CommonBond, an online platform for student loans, points out that they aren't partnering with any established financial institution. He notes that "one big bank's venture and innovation arm wanted to invest in our company but had to pull out for 'regulatory reasons' -- a sign, I think, of how difficult it is for banks to innovate, even if they wanted to."As you develop your digital strategy in this time of rapidly changing infrastructure, you will need to instill a culture of agility throughout all departments of your bank. In such a traditional sector, this may be easier said than done, but it will prove to be your gateway to remaining relevant to 21st-century financial consumers.