How Sears and Macy's Are Transitioning into an Improved Digital Strategy 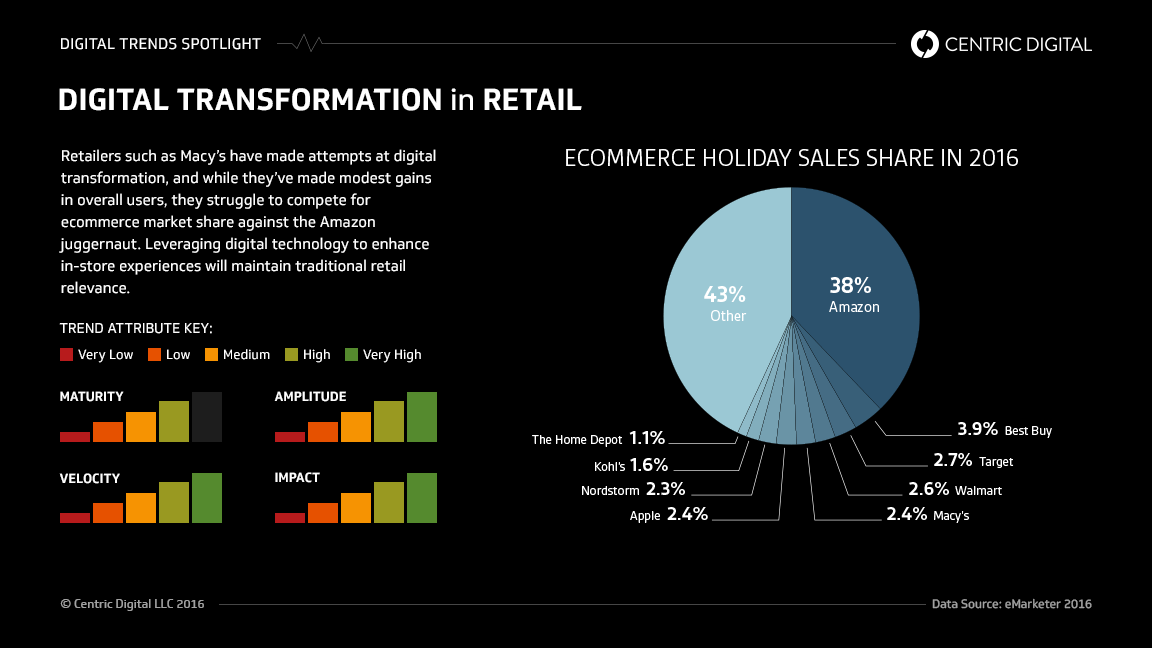 While retailers' transition from brick-and-mortar to online is inevitable, big box retailers will have to learn to leverage their existing footprint strategically in ways that augment their various online offerings.

Until recently, Macy's has been one of the primary "anchor stores" for malls across the United States, while Sears was the nation's largest retailer for most of the 20th century. Both of these legacy department store chains have suffered severe setbacks in an increasingly digital shopping environment, and they are now taking dramatic steps to save their brands. Here's a look at how and why these two retail giants are changing, and what their digital transformation efforts can tell us about the potential fate of other brick-and-mortar stores in 2017.

Sears: The Vultures are Circling

As of early February 2017, Sears was frequently in the news -- but not in a way they would wish. No business wants its name in a headline like "Why Sears Failed." Financial reporters note a 15 percent drop in the company's stock price in just a single day, reaching an all-time low of around $5 per share. This comes only a month after Sears Holdings announced the sale of its Craftsman line of tools to Stanley Black and Decker, and its plans to sell 150 more of its stores (following the closure of 278 Sears and Kmart stores since the start of 2015). Meanwhile, in perhaps the most dire omen, Fortune Magazine noted that "Bond Traders Are Betting Sears Will Go Out of Business in Two Years."

Too Little, Too Late?

Having lost 96 percent of its value in the past decade, Sears Holdings gave an all-out try to digital transformation. In 2015, Sears' hometown paper The Chicago Tribune reported that the struggling chain was instituting "integrated retail services," allowing customers to order merchandise online and then pick it up or try it on in the brick-and-mortar locations. The challenge for Sears, however, is that the brand itself had suffered damage in recent years, and the demand for its products had dwindled. Despite achieving the status of an "omnichannel leader," and polishing up its customer service with best practices like a curbside delivery app and a "Meet with an Expert" service, its sales figures continued to sink. Retail Analyst Craig Johnson, president of Customer Growth Partners, characterized the problem in brutally simple terms in the Tribune article: "The convenience aspect of ordering online and picking up is great, but if there's nothing there that you really need or want, it makes it an empty promise."

"Tanked" is the word Business Insider (BI) used, as they described Sears' status after Q2 2016 numbers showed a 9 percent year-over-year decline. The store's partnership with online loyalty provider Shop Your Way didn't prove to be its salvation, and the company's app was rated with only 1.5 stars in the iOS app store. The gist of the analysis published in the BI report (written before the December and January announcement of 150 more stores closing) was that the chain had not made the shift to digital. This proves the point quoted above by analyst Craig Johnson: digital transformation alone won't save a brand that's lost its cachet.In the second week of February 2017, CNN reported that the chain is still fighting for its life, elevating its stock price by announcing plans to cut operating expenses by at least $1 billion per year. At this point, there is no longer any mention of digital transformation: Sears will achieve the savings through offloading its Kenmore and DieHard brands, as well as transferring real estate holdings and reducing pension obligations. CNN's evaluation is: "The move is the latest by Sears to try to fix what many view as a dying franchise."

Over the last decade, Macy's has faced the same challenges as other major retail chains, losing over $10 billion of market value while Amazon's valuation rose by more than $300 billion during the same period. It wasn't entirely unexpected, therefore, when Macy's announced in August 2016 that it would be closing 100 of its stores over the next few years, equal to 15 percent of its entire nationwide presence. The CNN story reporting this closure itemizes other retail closures, including Target, Walmart and all 450 branches of Sports Authority. They point out that 44,000 retail layoffs were announced in 2016, with no expectation of a slowing pace in 2017.

Anytime a store undergoes such visible financial challenges, and yet still has substantial value, buyout rumors start fluttering through the media. "Reports surfaced" in late 2016 that Macy's was in a conversation with Hudson's Bay Co. of Canada about a possible takeover. Further speculation has been floated in early February 2017 that Amazon might be thinking of simply buying Macy's entire business. Wall Street Analyst Oliver Chen prepared a report noting the pros and cons of Amazon buying Macy's: Amazon would acquire more physical presence, allowing customers to easily pick up and deliver merchandise. It would also have a lot of new curated merchandise. Chen noted bigger downsides, however: the sheer number of cashiers, merchandise managers and other employees on the payroll goes against Amazon's lean business model. Although such a buyout seems unlikely, analysts point out that Amazon -- which is busily opening physical bookstores -- has been known to do unexpected things.

A Makeover for Remaining Stores

Macy's, however, is apparently still moving forward with a strategy that may well prove successful. Unlike Sears and other retailers, Macy's owns a majority of their stores and, in most instances, the real estate value of these locations exceeds their value to Macy's as a retail store. Supported by this financial safety net, the company is choosing to invest heavily in the stores that remain after it sells off the poorer performing ones. While Macy's will retain a significant brick-and-mortar presence in 49 of the top 50 U.S. markets, the retailer will focus its resources on its top-performing locations (as well as on its digital enhancements to the shopping experience). The idea is to keep a large enough physical footprint to give customers nearly everywhere in America easy access to Macy's stores, while also leveraging the increased functionality of dynamic digital offerings.

Adding High-End Design to the Mix

The stores that remain open are receiving an infusion of fresh design energy. The famous flagship store in Manhattan's Herald Square was recently given a $400 million facelift, and now houses upscale brands such as Louis Vuitton, as well as a Rem Koolhaas-designed Coach store-within-a-store. Furthermore, Macy's has designated its 30 top locations as "platinum stores," and is moving lower priced merchandise out of them entirely in order to make room for luxury brands. As part of its weeding-out process, the retailer examined the overall performance of the malls in which its branches are located. It is now putting into place a relentless marketplace Darwinism, shutting down its stores in malls that are already struggling because of other failing department stores, and pouring resources into branches where the surrounding retailers are thriving.

Digital Transformation Is Part of the Strategy

As Macy's pursues its strategy of consolidating and upgrading its in-person shopping experience, it is not losing sight of the whole reason behind the current financial pressure. Some of the profits it realizes through real estate transactions and luxury product sales will be channeled into elevating the digital customer experience. In the words of CEO Terry Lundgren, "Our omnichannel strategies continue to evolve based on the changes in our customers' shopping behaviors, including a focus on Buy Online, Pickup in Store and mobile-enabled shopping. In addition, we have invested in and enlarged our customer data and analytics team, which will help drive our new marketing strategies for 2017."

Among the elements that can contribute to that transformed in-store experience are those that take the familiar and implement it with a coat of paint that improves the overall experience. Macy’s is moving even further toward a more intimate vendor shop and high-margin business model where each area of the store feels like its own mini-experience of its own. Part of that strategy includes a boutique spa experience through their newly acquired vendor Bluemercury.As part of their transformation, Macy’s is also expanding its personal shopping services, providing the opportunity for its most regular customers to feel a deeper and more intimate connection to the brand and the end-to-end shopping journey. Additionally, Macy’s is continuing digital integrations throughout the customer journey, pushing forward on the in-house "My Wallet" app as well as a new collaboration with Paypal's One Touch Network. Similarly, Macy’s is pushing to integrate more in-store experiences built around beacon technology and mobile app offers to allow seamless transition of experience as consumer walk around the store.

On the more digitally enabled side of Macy’s house, the company is aggressively scaling IT capabilities, Improving natural language search on mobile and desktop sites to allow for stronger, more fluid search and find experiences on their website — all as part of simplifying the sometimes complex user experience of shopping at a big box retailers with seemingly endless options.Much of the work Macy’s took on is indicative of their ability to innovate, especially on mobile, where they won "Mobile Retailer of the Year" award in 2016. Considerable effort and investment will also go toward beefing up and democratizing their Buy Online, Pickup In-Store offering.All in all, Macy's move to downsize its real estate portfolio is consistent with the retailer's strategy to leverage all its resources. According to its current digital strategy, these resources will be divided between enhancing the overall in-store shopping experiences and optimizing the omnichannel customer experience. The outcome is far from assured, however: The decline of Sears illustrates that physical stores are still key to financial survival, and market research expert Neil Saunders comments in CNN Money that "The key will be whether Macy's is truly committed to rejuvenating its remaining stores in a way that gives consumers a reason to shop in person rather than online."

While retailers' transition from brick-and-mortar to online is inevitable, big box retailers will have to learn to leverage their existing footprint in ways that augment their various online offerings. The pathway is clearly hazardous, crowded with the debris of stores that haven't managed the transition. As such, a "broad digital roadmap" is essential for retail survival in this century.