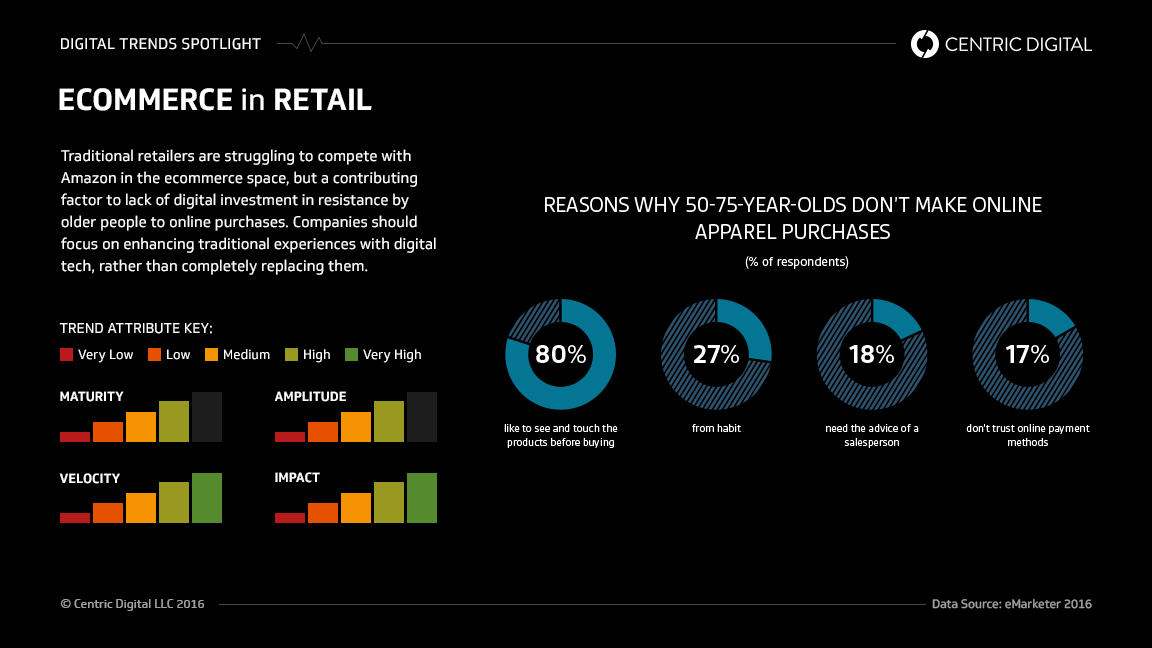 Retailers need to examine their current digital strategy and reshape tools and offerings to better serve the interests of older customers, who currently hold 70% of the nation's disposable income.Millennials are seen as both the face of financial technology and the catalyst of the shift in retail's digital evolution. However, there's another group with even more spending power, and they largely go unnoticed in the digital transformation.Baby Boomers in the "silver" phase of life currently hold 70 percent of the nation's disposable income. These consumers have different needs, preferences, expectations and shopping behaviors than other groups, ones that typically revolve around more conventional modes of retail engagement.There are still numerous opportunities to introduce the elder population to today's digital shopping capabilities. Millennials and Baby Boomers alike can benefit from digital ecosystems that deliver fresh groceries weekly, bring them cookies at 2 a.m. or let them shop at a brick-and-mortar store without ever seeing a cash register.

Baby Boomers are the ultimate digital immigrants. Although their adoption rate has been slow, they are indeed joining the digital world. According to Pew Research Center, 27 percent of all Americans age 65 and older use social networking and 59 percent of Baby Boomers report using the internet on a regular basis. This number is expected to continue rising as adoption rates increase and younger, more tech-savvy people "age-up" into the demographic. What's more, 81 percent of older adults who use social networking sites say they socialize with others on a daily or near-daily basis. This time spent in the social ecosystem is an excellent opportunity for retailers to both engage with seniors and gather useful information.Of particular interest to retailers is the fact that affluent seniors use the internet more than their peers, with 90 percent of those who enjoy an annual household income of $75,000 or more going online to socialize, gather information and make purchases.

Marcie Rogo, the cofounder of the subscription service Stitch, which keeps Boomers connected to the outside world, believes they are among the most appealing retail demographics because older consumers are more loyal to companies they do business with than their Millennial counterparts and less willing to jump ship at the first pang of dissatisfaction. They're also fans of membership-based offerings that provide continued income to retailers.However, engaging with an aging population is still heavily weighted toward traditional marketing methods such as television advertisements, in-person interactions, and word-of-mouth.As the above research shows, it's not that this demographic doesn't want and need digital options or that they aren't engaged with digital solutions. Older customers simply interact with the digital economy in a different way and for different reasons, and they require a bit more assistance to fully adapt to the new paradigm.

Boomers are expected to live longer than previously projected. This not only makes them forerunners of the emerging "Longevity Economy," but it also means they're going to be shaping the retail environment for quite a few decades to come.Companies have to create long-term strategies to evolve with this aging population. Establishing a silver-friendly approach requires four key elements:

Seniors offer a distinct opportunity to retailers because they have a set of physical, emotional and health needs that diverge from those of groups commonly targeted by e-commerce sites and other technologically savvy brands.They're in the notable position of making up a large portion of a "sandwich generation," looking after the needs of their aging Silent Generation parents, as well as their Gen X and Millennial children affected by the sluggish economy of the past few decades. Baby Boomers need a more diverse selection of services to take care of themselves in addition to their older and younger charges.This uniqueness applies not only to the products they use but also to the methods that engage them. For example, while over 50 percent of consumers across all demographics own a smartphone, only 18 percent of people age 65 and older have one - most opt instead for basic cellphones instead. Nor do elders seem to be in any rush to give up their flip phones, with smartphone ownership only increasing by 11 percent from 2011 to 2016 within this group. This may seem like a major roadblock in the digital retail transformation, but it actually poses no real issue at all. Why? Because 27 percent of the older population opts for digital interaction through tablets and e-readers.Drilling down a bit deeper into the numbers provided by Pew regarding senior retail habits reveals divisions within this population. The younger silver consumers are, the more educated and affluent they tend to be. This translates to an increase in technological know-how and a more positive opinion of online and digital offerings.Evelo, an electric bicycle company, is an example of a startup that is attacking this uniqueness from both ends. Its products offer a healthy way for older people, who are not as physically able as they once were, to be more active and travel. Both the nature of the product and the targeted outreach cater to seniors and the longevity economy - with an engagement strategy that includes a team of "Ambassadors" that come to customers' homes and provide a test drive and instructions on how to use the bicycles. This human touch is beneficial for those not familiar with managing an online shopping experience.This combined strategy is a necessity to engage successfully with an aging population on the technological front. Even with their increased level of digital adoption, only 29 percent of older adults who own any number of common digital devices feel comfortable using new devices on their own, and 70 percent think they would need to ask for assistance.For some seniors, the discomfort that comes with new technologies extends to social networking sites, as well. Of seniors who do use the internet but are not currently engaged on social networking sites such as Facebook or Twitter, 56 percent say they would require assistance to use these sites to connect with friends or family members. Just 24 percent of these seniors feel comfortable entering the social ecosystem without someone there to guide them.

Ingrained behaviors and lack of technical prowess can certainly create roadblocks to digital engagement for retailers. Companies often believe that discomfort with technology means that technology is not the solution or that digital toolswill not be useful in interactions with silver consumers. Innovators realize that sometimes you can fight fire with fire, or in this case, discomfort from new technology with even newer technology.For example, the new generation of voice-activated home assistants like Amazon's Echo or Google Home has been touted as a potential tool for seniors to become more technologically engaged. One of the main draws is the ability to use voice commands, which are more intuitive for digital immigrants who may be uncomfortable with traditional interfaces. The ability to provide services and products in both the digital and personal planes opens up an entirely new channel for retailers to integrate with the silver economy.Making retail experiences Boomer-friendly means tailoring interactions to be as uncomplicated as possible, with ample opportunities to get in touch with a real person. Flashy websites and apps may entice younger shoppers, but older generations often find it difficult to cut through a showy interface to find what they're looking for. Similarly, the use of modern slang, memes, and other contemporary communications can be lost on older generations, creating the belief that particular goods or services aren't a good fit for them. While a bit more education on the benefits of emerging digital retail options can make all the difference in many of these cases, a silver consumer will often find it easier to discount the tech side of shopping altogether before a company ever gets the chance to engage.Retailers need to examine their current digital strategy and reshape tools and offerings to better serve the interests of older customers. There are three fundamental factors companies should take into consideration:

Big data, e-commerce, tech, apps, and wearables seem forever linked with terms like "millennials," "hipsters," and "Silicon Valley." Retailers that keep their digital focused only on those buzzwords, which all e-commerce sites are competing for, are leaving a huge opportunity on the table and opening the door for competitors.Companies who can leverage the aging retail environment will find ever-increasing opportunities to become digital leaders. A streamlined structure for innovation of established business models and creative engagement will ensure that organizations thrive in the longevity economy.