How Emerging Markets are Tapping into Consumer Banking Technologies 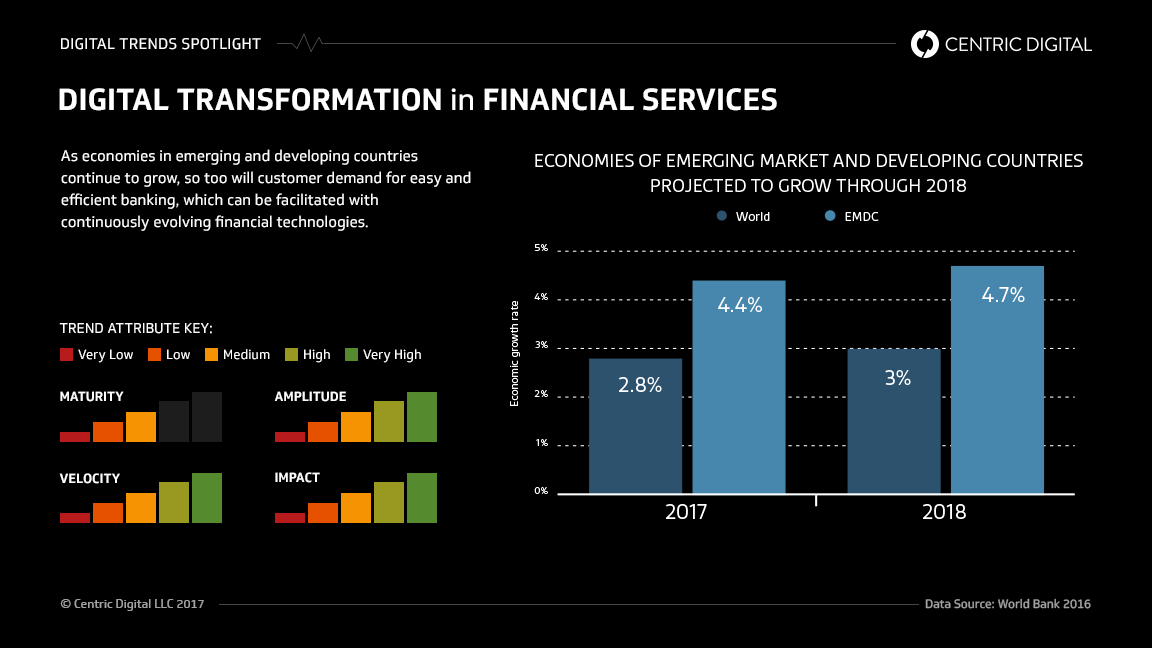 Developing countries are seeing an unprecedented rise in the number of their citizens moving from speculative to banked transactions. Forerunners in the digital transformation of banking are changing the ways these new clients can access banking services to fully accommodate this dynamic shift.The world's developing economies can be classified in various ways, but whether they fall into the category of "emerging" or "frontier" markets, their momentum in the global finance network is forward. Driven by an expanding middle class and new business structures, banking in these regions is undergoing a drastic shift. As financial technology becomes integrated into a previously unbanked society, it escalates the rate of social change and brings about massive shifts in the flow of funding.The growth in global banking changes more than individual lives, however: Guardian finance writer Paul Mason observes, "Fast forward to the 21st century and banks have an extra function: they stand at the center of a global economy where money is invented on spreadsheets, spent via electronic card, and where speculative money transactions each day exceed the size of the global economy." He notes that "the rise of banking and financial services in the developing world is unstoppable – above all in Asia, where economists predict the emergence of a billion-strong new middle class by 2030."

Banking is experiencing significant growth, especially in developing countries that are contracting access to basic financial services for the first time: World Bank figures show that 62 percent of adults worldwide now hold an account at a bank or mobile money network, and the number of unbanked people has dropped by 20 percent between 2011 and 2014.Prior to the 2007-2009 financial crisis, emerging markets were already growing faster than the big established nations, and this trend has only accelerated in recent years. Insulated from the collapse of the interbank market and less inclined to heavily borrow, banks in developing countries have remained more stable during lean economic periods, and are able to use their increasing deposit funds to make more loans. Furthermore, individual investments are smaller, lowering their risk exposure.Below are three ways in which innovative digital transformation strategies are serving emerging markets in traditionally unbanked regions.

Mercantile Bank of South Africa is now delivering channel-agnostic business banking to its small and medium sized business (SMB) customers. Its new digital platform, supplied by Indian company TCS Financial Solutions, provides aspiring entrepreneurs with full financial mobility. Businesses can conduct all their financial operations in one platform, which is accessible via desktops, smartphones and tablets. The new payment system is even integrated with South Africa's national tax infrastructure so that small businesses can maintain all their public tax obligations easily via the same platform they use for their other banking.

Paying attention to the needs of SMB consumers has paid off for Mercantile, and Banking Tech reports that customer satisfaction levels with that bank now stand at 86.7 percent. Strongly satisfied customers are the real key to a bank's future stability, and digital strategy is the foundation for this deepened connection between Mercantile and the small business owners it serves. In an interview with Banking Tech, Mercantile CEO Karl Kumbier describes the new platform as "easy to use, secure, agile and flowing intuitively. It is designed to be simpler and rests on the three pillars of security, speed and convenience."Easy access on any device or channel is fundamental for institutions that deliver consumer financial services, considering how rapidly the entire world is embracing mobile phone usage. Ericsson's latest annual mobility report predicts that developing nations will account for 80 percent of all new mobile phone subscriptions in the next five years, with the top five growth regions all being located in Asia. Reporting on these statistics, TechCrunch observes that "emerging markets are where all the growth is at."

Acquiring credit is one of the primary steps to achieving personal financial power, and most consumers in the emerging and frontier economies have no credit history. Cignifi, an American analytics firm with operations in Mexico, Ghana and Brazil, recently partnered with Equifax to create their proprietary "Predictor Inclusion Score." This score will be driven by insights from consumers who agree to provide their mobile phone usage data, and it gets them started with a credit history based on this data alone. This innovative mobile banking strategy will bolster consumer access to loans and other financial services, allowing banks, retailers and insurers to accept credit applications from people who have no previous banking history. This simple personal capability is already making strides in offering more economic opportunities for people throughout Latin America.

"Micro, small and medium-sized enterprises (MSMEs) in developing countries are disproportionately affected by poor access to credit," according to World Bank research, published by Virgin.com. The reason is that unbanked people have traditionally depended on a local network of personal money lenders, which is fraught with uncertainty. Even micro lending programs such as Grameen Bank, founded in the 1980s by Muhammad Yunus to worldwide acclaim, still suffered from poor risk assessment and high interest rates. Furthermore, women's businesses have been historically hampered from finding funding. Goldman Sachs Global Markets Institute notes that "Our results suggest that closing the credit gap for women-owned SMEs in the BRICs and N-11 countries over the next few years could boost real income per capita growth rates in those countries by around 85 bp on average." Harvard Business School researchers add, "Attempts to alleviate financing constraints for would-be entrepreneurs is an important goal for policy makers across the world."As new digital strategies enter the picture, geographic location and neighborhood politics no longer pose a barrier to aspiring business owners. Inexpensive, secure credit access becomes equally available to anyone who demonstrates responsibility, regardless of gender or other personal status considerations. The market for such credit is growing explosively, and new startups are surging in to provide these services. In addition to Cignifi, other companies including Inventure, Branch, Saida and Lenddo are entering this arena. These lenders all use sophisticated analytics to develop a risk profile based on a person's mobile phone history and other online behavior patterns to give users a starting credit score.

3. Removing Distance as an Obstacle

A third example of technology bringing rapid change to a region can be seen in the flourishing of M-PESA in Kenya. Launched in 2007 by Safaricom (the country's mobile network operator), the M-PESA platform enables consumers to transfer cash directly through their mobile phones. Acclaimed by The Economist as the most effective system of its kind in the world, M-PESA is now used by two-thirds of the adult population of Kenya (over 17 million people) and by 2012, 31 percent of the country's GDP was flowing across the M-PESA networks.

M-PESA does more than simply let individuals transfer money, however. While remote banking does provide a major advance in personal effort and safety, that benefit is only the beginning. Partnering with the Safaricom network, the Commercial Bank of Africa (CBA) launched its M-Shwari mobile banking service in 2012. Over 10 million M-PESA users now have M-Shwari accounts, and 50,000 small loans are disbursed every day. New customers can open an account in as little as 30 seconds, because their personal identification details were already captured when they signed up with Safaricom and received their SIM cards. This information is cross-checked with Kenya's national identification system, providing a stable database of users. As an outgrowth of receiving loans from M-Shwari, Kenyans now are able to build credit, creating the financial architecture needed for entrepreneurs to realize their business ambitions.

Fintech as an Evolutionary Force

It's imperative that people working in the finance industry avoid falling prey to the illusion that the technological peak has been reached and they have now attained the mountaintop. At the 2016 Summit for Asset Management in London, keynote speaker David Wood, Chair of London Futurists, gave a talk entitled "The Elephant on the Footpath: Anticipating Industry Disruption with Future Tech." Other speakers referenced a "tsunami" of banking regulations that are hobbling the traditional financial institutions, while lean fintech startups surge forward, unburdened by the same storm of compliance requirements. Data management and cyber security, however, are a problem across the financial industry, and they're only growing more challenging in the era of big data.When new channels are carved by fintech along the flow of money, the increased financial current affects the lifestyle, dreams and possibilities of a whole society. Access to credit enables individuals and businesses to use investment capital, leading to a stably growing economy. While considerable progress has been made to improve global financial inclusion, there is still a long ways to go, as over 2.5 billion people still live without access to basic financial services.Banking’s digital transformation is an ongoing process with no signs of slowing down, which makes agility the most valuable attribute in every industrial sector. An agile response to changing marketplace needs and expectations will characterize successful institutions, as technology surges forward in the direction of the "always connected" era. Current developments in artificial intelligence, machine learning and the Internet of Things are guaranteed to bring new ways of moving funds that we collectively have not yet even imagined.