On:
Augmented Reality
On:
Digital Trends 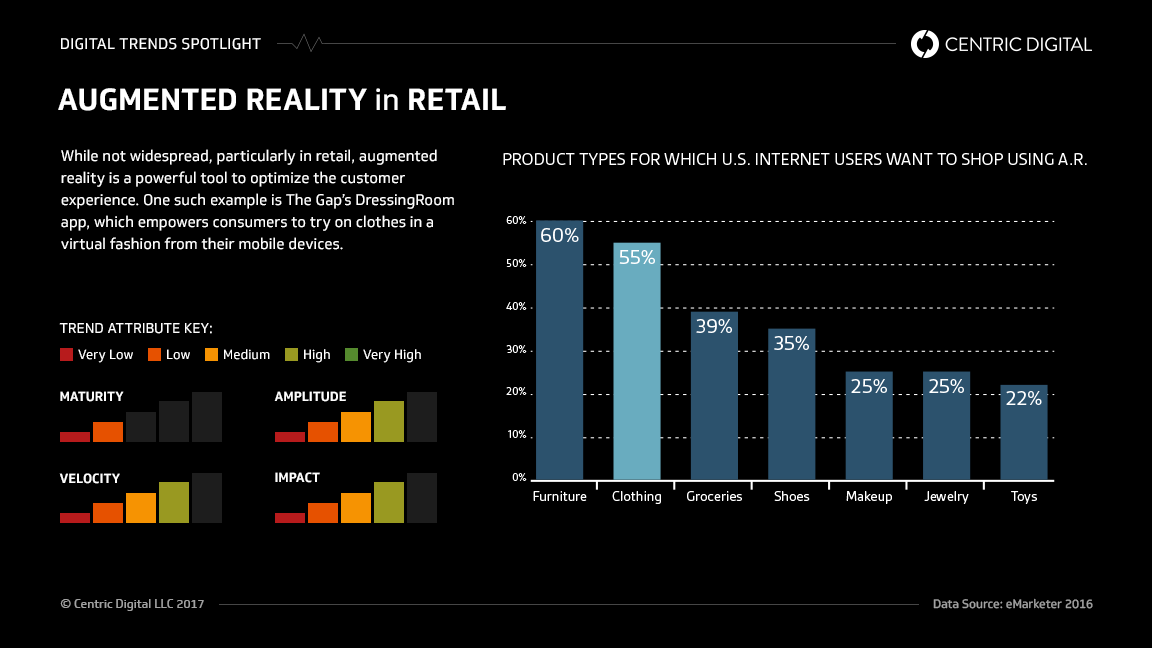 VR and AR in retail are definitely here to stay, as each retailer makes its choices about the value proposition offered to customers by new technologies, it is instructive to track the pathways to true marketing success.As GAP struggles to hold onto its retail niche during a brutal era of marketplace change, it is embracing technology with fresh fervor. Like many other retailers currently being forced to close brick-and-mortar stores, GAP is now in competition with online merchants to win back the loyalty of its own former customers.By going out on a limb and launching new augmented reality (AR) capability, GAP hopes to recapture customer interest and strengthen its contemporary edge. Handled skillfully, digital has much to offer retailers during this troubled transition period, but technology has to be introduced as part of a coherent strategy. By choosing to invest in a nascent version of augmented reality, GAP is taking a substantial risk, and it's not yet clear whether the investment will pay off.

In May of 2016, GAP announced that it would be closing 75 stores within its Old Navy and Banana Republic brands. Another cycle of grim news in November, 2016, revealed that the chain would close another 75 stores in the wake of seven consecutive quarters of declining sales. In previous eras, dark numbers such as these tended to be brand-specific; one store losing traffic simply meant that shoppers were heading to another store instead. The remedy might be a revamping of product or pricing. Now, however, every brick-and-mortar retailer is struggling under the exact same pressure.Articles like this one from Business Insider are proliferating - analysts once again detail the "downward spiral" and "grave consequences" for numerous department stores and retailers in the age of online shopping. Thirteen major retailers are closing a total of 1,500 stores during 2017. Whole shopping malls are toppling as their anchor stores go under, according to Credit Suisse analysts, who detail 200 malls that could shut down as a result of Sears' decline. A 2015 study by Internet Retailer found that in-store clothing sales across every brand increased by only 1% during 2015, while online sales soared by 20% during that same year and reached a total of $80 billion in the United States. Emergency action is clearly needed if retailers are going to financially survive.

When brick-and-mortar stores close, shoppers lose out on the ability to try on clothing. Moving rapidly to fulfill that customer need, Gap is introducing an online "trying on" experience using AR. The fact that GAP made this decision as a result of listening to customer preference is helpful, but the haste that led them to roll out the functionality in a fragile and early stage will affect its utility.GAP's new Dressing Room app enables online shoppers to "try on" clothing remotely through their mobile devices. Dressing Room lets consumers enter their height and weight, and then choose from five standardized body types, picking the one that most resembles their own shape. A three-dimensional (headless) mannequin corresponding to those specifications then appears on the screen, and the customer can put different items of clothing on the mannequin to see how they look.

The app (which is still in beta) requires the use of Google's Tango augmented reality platform. This feature, requiring the use of two separate cameras in order to provide a 3D experience, will be available in the future on a variety of smartphones. Right now, however, there is only one device on the market that can run Tango - the Lenovo Phab2 Pro smartphone. If Google is investing significant time and money into developing a technology, it's reasonable to expect that technology to spread rapidly throughout the marketplace.However, few people currently own the Lenovo Phab2 Pro, and this early introduction suffers from a logical dilemma - GAP's customers aren't going to invest in a new brand of phone solely to use GAP's Dressing Room app, while only a small subset of Tango enthusiasts are also going to be GAP customers. With ecommerce giants like Amazon rapidly gaining popularity with consumers and financial pressure building with every passing quarter, GAP needs to move forward quickly if it's going to compete effectively.

Offering Augmented Reality Is News in Itself

For retailers, AR is a shiny futuristic technology that's mainly reliant on devices and systems that are still under development. However, what AR lacks in current utility, it makes up in news value, and this may be part of GAP's strategy. The mere fact that GAP is offering an AR option will bring attention to its brand and attract customer interest, even if few of those customers actually have the right kind of phone to make use of Dressing Room. With consumers relying heavily on their mobile devices to meet their consumer needs, a new technology like this being rolled out has can potentially drive traffic to GAP’s website and incidentally increase its online sales. Although there is no guarantee yet how successful this technology may be with it’s existing consumer base, the unique Dressing Room app will be publicized by different platforms highlighting GAP as a digital leader and improve chatter about its brand and strategy.

Financial success is founded on sound business planning, and the use of AR probably has a place in any retailer's long-term plan. In an article from Fall, 2016, Harvard Business Review identifies Virtual reality (VR) and AR as forces that will "reshape retail." These technologies have the potential to personalize the shopping experience in unprecedented ways, easing the main pain point of online shoppers by letting them see how their purchase will look in its intended surroundings. To find success with AR, it's necessary to systematically examine what kind of personalization is called for in each situation.

Drilling Down on Personalization

One customer need that's filled beautifully by AR arises when people are shopping for furniture. Whether shoppers are in a physical furniture store or browsing online, what they really need is the chance to see how the piece will look once they move it into their home. The physical logistics prevent "trying out" furniture in its intended place, so this was a natural pain point that only AR could fill.Ikea moved to meet this need in 2013, creating an AR catalog app that works with a device's camera. When a customer takes a photo of their home area within the app, they can then browse through the IKEA catalog and see how each item would look in that spot.Working on a more sophisticated version of AR offered through Tango, furniture retailer Wayfair offers a similar option. The Wayfair View app lets viewers not only see one fixed image of a piece of furniture, but it also provides a 3D image of the item that can be rotated and viewed from different perspectives, moving with the viewer in real time. It's hard to imagine more personalization than this - essentially, an entire furniture inventory is moved into the user's own home.Lowe's Vision app, also based on Tango and also still in beta, promises even more lavish personal functionality. Lowe's customers will be able to use a suite of measurement and design tools, all integrated with Lowe's products. The Tango platform, with its two cameras, allows the consumer's device to perceive depth in whatever it's pointed at. This innovation gives rise to new functionality in three-dimensional placement of virtual objects in real places. The Lowe's Vision app lets customers view many home decor items and appliances as they'll look in place, and it effortlessly measures and saves the dimensions of any space in their home.

The key point of investing in AR or any other new technology is that it has to fit into an identified spot in a retailer's business model. Linda Smith, CEO of FaceCake, proves this point. Her augmented reality platform works with any home browser and webcam, letting consumers shop for cosmetics from any online brand that includes the FaceCake code in their site. Forbes spotlights FaceCake's marketing technology as one of the most promising uses of AR, and Smith comments that "AR is necessary to really emulate or extend the shopping experience." GlamScout, which is one of FaceCake's mobile apps, allows users to pick up the shade of any item they see in real life (flowers, frosted donuts, clothing, etc.) and automatically find cosmetic shades in that exact color from over 100 participating companies. The user can then try on the cosmetic in real time, seeing how it looks on their own smartphone's screen.

"Not Just Tech for Tech's Sake"

Profiled in Harper's for the charm and utility of her AR cosmetic apps, Smith has comments about the use of AR that other retailers would be wise to listen to. She points out in her Forbes interview that technology has to be integrated into an overall business plan; when they were creating the FaceCake app, Smith says, "it could not be just tech for tech's sake or something cool that did not fit into or extend the way you would naturally shop."

Waiting to See the Outcome for GAP

Considering the highly specific and uniquely personal functionality that the furniture and cosmetic AR experiences offer to remote shoppers, questions naturally arise about the future of GAP's Dressing Room app. Apparel shoppers come in countless shapes and sizes, and that individuality won't be captured by attaching measurements to five standardized body types. Viewing clothing on a virtual mannequin, even one that's approximately sized like themselves, may not provide customers with a personal enough experience to win them over to the GAP.VR and AR in retail are definitely here to stay, and projections estimate that investment in this sector will reach $30 billion by 2020. As each retailer makes its choices about the value proposition offered to customers by new technologies, it's instructive to track the pathways to true marketing success.