The Way We Bank Is Changing. Will Financial Services Companies Catch on in Time?

On:
Digital Trends
On:
Fintech 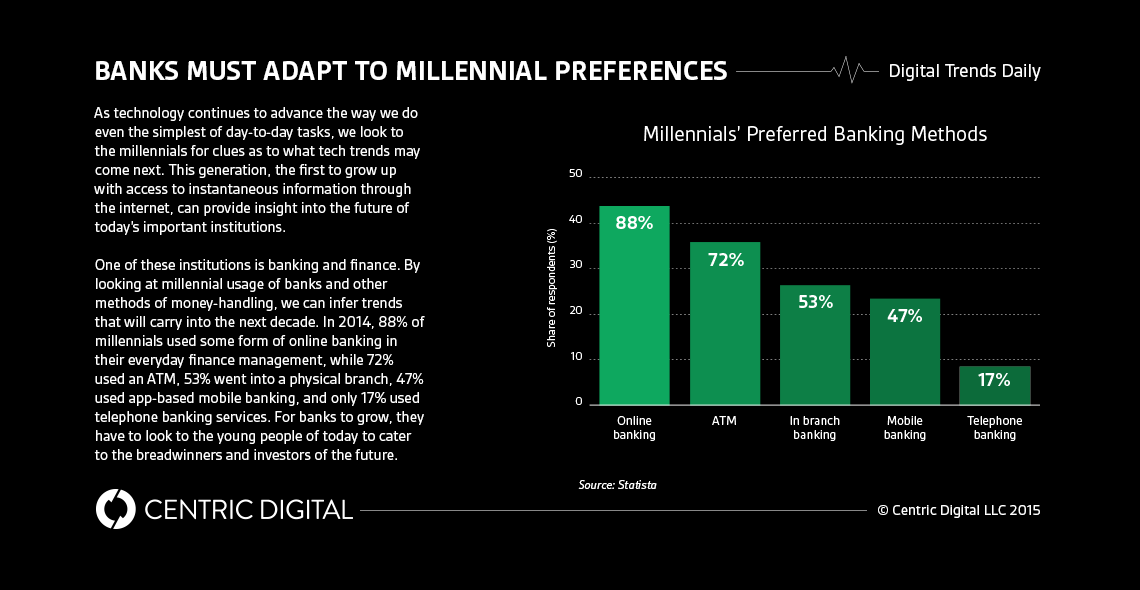 While mobile and online banking have grown more prevalent in recent years, brick-and-mortar banks are far from forgotten. The financial services companies that implement clever technological initiatives may still be able to capitalize on digital trends.Why would you elect to use a service that will take up more of your precious time? Thanks to ATMs, stepping through the glass doors of your local bank and waiting in line for your money has become a thing of the past.Now even stepping out of your house to go to the ATM is antiquated — nearly all banking services can be done online or through your bank’s smartphone app. Does this spell trouble for the financial industry?

The answer is not be quite what you’d expect. Although it may seem as though apps and websites would contribute to the downfall of the physical, commercial bank, many studies show that banks are, in fact, still going strong.The Federal Deposit Insurance Corporation (FDIC) released a study showing that “despite the increased use of online and mobile banking, brick-and-mortar banking offices continue to be the primary means through which FDIC-insured institutions deliver financial services to their customers.”According to the study, FDIC-insured institutions operated 94,725 banking offices as of June 2014, only 4.8% fewer than the 99,550 offices operated in 2009.The report also found that there are four main factors that influence banking offices: “population growth, banking crises, legislative changes to branching laws, and technological innovation.”The report insists that the existence of new digital methods like app- and web-based banking is not enough to convincingly argue that brick-and-mortar locations are in decline. It claims that if a relationship with the customer has already been made, an app will have a hard time shifting the terms of that relationship on its own.

An Opportunity to Succeed

The aforementioned FDIC survey indicated that in the previous week, 19% of young adults ages 18 to 29 visited a bank or credit union branch, compared to 29% of adults aged 30 to 49.2.Looking at the millennial interaction with banks and other financial services could offer an advantage to banks hoping to retain satisfied clients well into the future.In order to keep up with the increased demand for easily accessible banking services, many banks have already taken steps to encourage their current customers to start using to their online or mobile-based services, according to CNN.Using lower fees or pricing incentives will also move customers out of the bank and onto their phones — but still within the company’s reach.Times are changing, but banks have already shown the pliancy to survive big shifts in the financial landscape. If banks can focus on customer retainment through mobile applications and web services, the two fastest-growing methods of money management, they’ll find themselves the benefactors, not victims, of the digital revolution.