How Burberry Embraced Digital and Transformed Into a Leading Luxury Brand 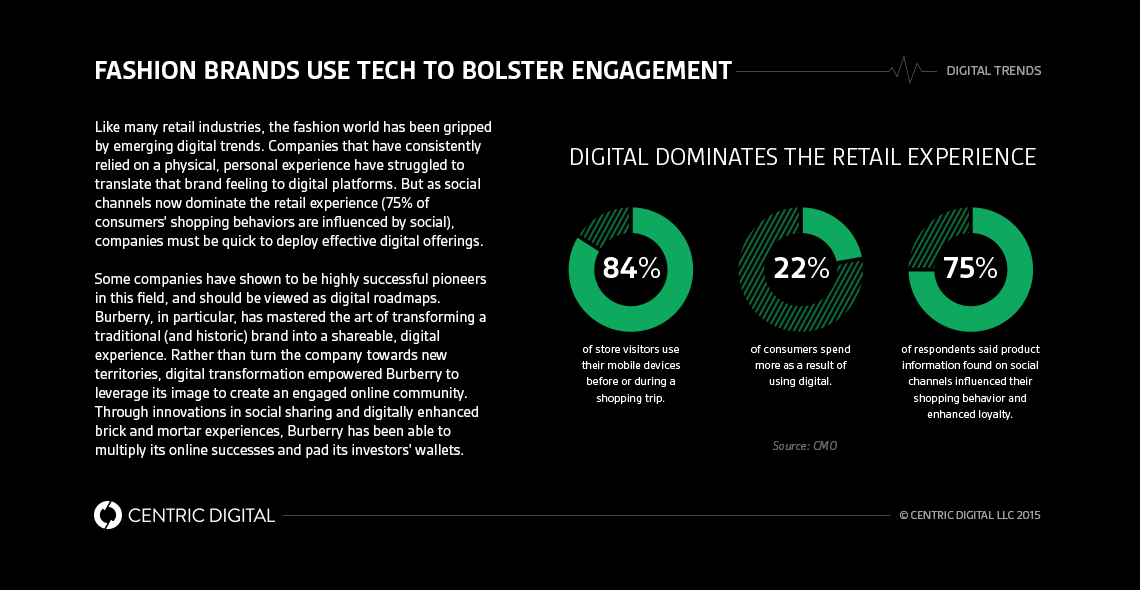 Burberry’s lukewarm mid-2000s performance transformed into renewed prosperity after digital strategies helped them get back to their roots.Former Burberry CEO Angela Ahrendts once said, "I grew up in a physical world; and I speak English. The next generation is growing up in a digital world; and they speak social." For fashion brands, the choice to embrace digital is a choice between thriving or going the way of the dodo. Though fashion is a historied industry reaching back almost as far as the dawn of man, dynamic modern markets demand evolving strategies -- digital is the newest thread in the fashion sewing kit.No company realized this sooner than British luxury retailer Burberry. An early adopter in the digital world, Burberry capitalized on the digital movement by galvanizing user interaction and accentuating the exclusive, haute couture persona of the brand.

Digital as a Strategy

When Angela Ahrendts stepped into the role of Burberry CEO in 2006, she committed to proliferating the brand by pursuing digital as a core strategy. At the time, most of Burberry's luxury competitors had non-existent digital media offerings. Ahrendts looked outside of fashion to Fortune 500 digital leaders like Apple, Google, Nike, and Starbucks as role models. Alongside her then Chief Creative Officer (CCO) Christopher Bailey, she turned Burberry into one of the most prominent players in the digital space.

Return to Its Roots

Since the early 20th Century, Burberry has been synonymous with the trench coat -- founder Thomas Burberry styled the gabardine outerwear after British officer garb from as early as 1901. Yet, during Ahrendts's first management meeting in typical English rainy weather, not a single manager of the 60 in attendance wore a Burberry trench. If Burberry executives weren’t wearing Burberry clothing even with the steep discount they could get, how could the company expect consumers to pay full price?Ahrendts travelled the globe for six months to assess the state of the Burberry brand. She discovered that it has largely lost its luxury sheen, with licensees and design factories all over the world producing clothing from Burberry polo shirts to kilts. Ahrendts decided to pivot the company's business model and commit to digital transformation. At the cornerstone of that paradigm shift was the iconic coat to which the company owes its legacy. By consolidating regional websites into one singular platform and empowering employees and customers with digital tech, Burberry positioned itself as an engageable and forward-thinking champion of design.

'Art of the Trench'

Burberry was one of the first major fashion houses to create its own social networking site: in November of 2009, they launched the Art of the Trench website, which collaborated with leading fashion photographers, most notably Scott Schuman of The Sartorialist. Dedicated to the Burberry trench coat, the site was designed as a public place for Burberry trench coat-wearers to publish images of themselves in the coat.Site visitors could choose favorites, comment, like, and share posts while effortlessly connecting to social media channels like Twitter and Facebook. It garnered a reputation as a digital democracy -- continuously updated by users and fans alike -- and attracted both existing and aspirational customers. This strengthened the brand's goodwill and engaged a new, younger demographic. By November of 2009, Burberry had over 1 million Facebook fans, the largest of any luxury brand at that time. Since then, the retailer has continued to create unique digital content, such as Burberry Acoustic and Burberry Kisses.Their current site is both elegant and easily navigable across desktop, mobile, and tablet -- a true one-stop shop for purchasing, social media, and creative content offerings. According to Ahrendts, “More people visit our platform every week than walk into all our stores combined.”Burberry has also done an exceptional job at personifying the digital experience at brick and mortar locations -- their flagship store on Regent Street in London is actually inspired by the Burberry.com sitemap. It uses RFID chips to showcase relevant product videos as customers pass nearby screens, and employees use iPads to help visualize the Burberry story.

Today, Burberry is a foundational model of effective digital customer engagement, due in large part to vibrant two-way communication via social media channels. They’ve been long-time innovators in this space: in September 2011, Burberry used Twitter and Instagram to unveil its 2012 collection prior to hitting the runway and they streamed the event live on YouTube. Just last September, they became the first luxury brand to sell through Twitter’s new Buy Now functionality.Their quality content, sophisticated usage of social media channels (including consumer analytics), and high level of interactivity have propelled the brand to greater consumer engagement and impressive monetary gains. Between 2011 and 2015, the retailer posted revenue growth of 68.1%, rising from £1,501.3M to £2,523.2M.

The arrival of digital to fashion has transformed consumer behavior and revolutionized the shopping experience. The crux of Burberry’s success lies in its willingness to quickly pivot core business strategies to account for this dramatic shift. They believed in their storied product, focused on their brand’s strengths, were steadfast in execution, and engaged with all types of consumers, from brand loyalists to critics. This all-encompassing approach to digital was a blueprint for success and established Burberry’s reputation as a pioneering digital innovator in fashion.