Too Many Chiefs? How CDOs, CIOs, CTOs, and CMOs Must Work Together 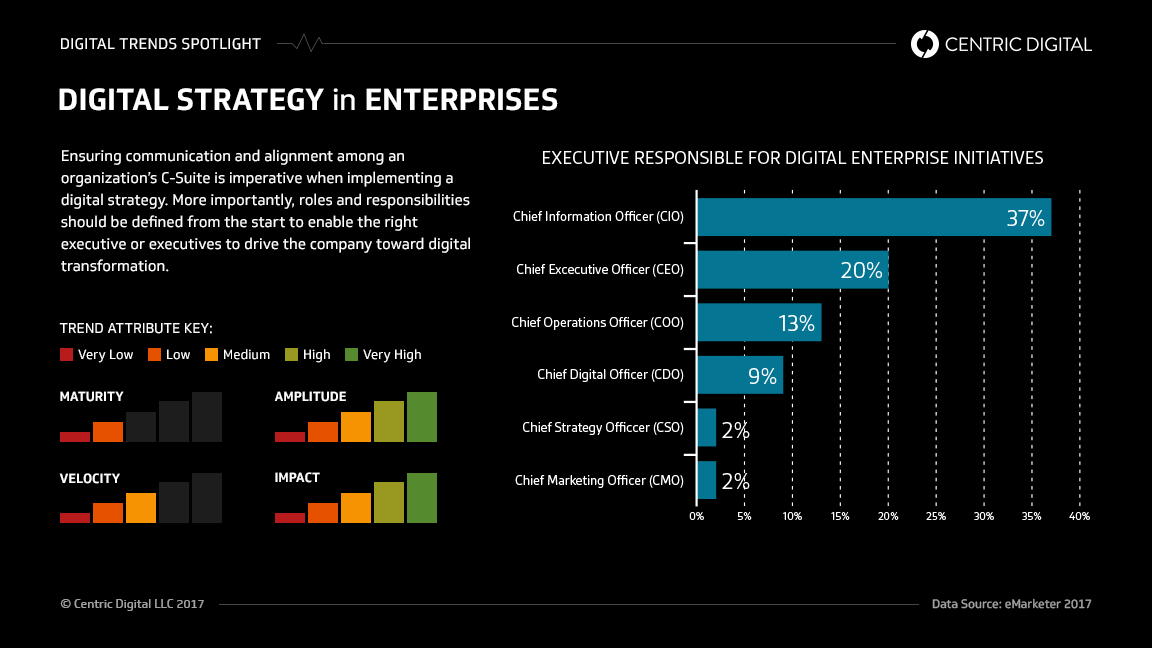 Clustered around the established CEO, COO, and CFO roles is a whole new line of commander-in-chiefs, like the emerging CDO. These roles steer the increasingly elaborate data and tech operations of the world’s biggest firms.Though there is no doubt that these new tech-focused positions can and should overlap, an understanding of their varying ownerships and responsibilities is critical for companies that want to divide and conquer their expanding technological operations successfully.

For the purposes of this discussion, description will center on the engagement between the CTO (Chief Technology Officer), the CIO (Chief Information Officer), the CMO (Chief Marketing Officer), the CDO (Chief Digital Officer), and the other variety of CDO (Chief Data Officer).All of these roles vary, of course, depending on the company’s product and business model — and larger firms may boast all five of these roles while some may focus responsibility onto just two or three.The first considered is the CTO and CIO; two positions that are most often conflated. A CIO is a go-to commander and problem solver for a company’s existing technologies, responsible for making sure that the company is consistently adapting to new and necessary tech and IT products, including software or hardware.The CTO’s focus, on the other hand, is on identifying and implementing new technologies, and he or she is the more externally driven of the two roles — the CTO is tasked with making sure that customers and clients are on the receiving end of the highest-quality and most efficient technology possible.To maximally simplify these functions: a CTO handles external operations and improvements, while a CIO’s focus is largely internal.The next and most easily differentiable role is the CMO. Often referred to as a company’s informative “nexus,” the CMO’s responsibilities span from sales to product development to marketing and even further into customer service.As this marketing-driven nexus, a CMO must work closely with other C-level employees to make sure that the marketing sector is utilizing the most up-to-date technologies and strategies to promote their product or brand to the world.

The last two roles — Chief Digital Officer and Chief Data Officer — share not only an acronym but are very different. As you might expect, a data officer extracts and analyzes data to inform a company’s business strategy — they must know how to gather information and, more importantly, they must know how to use it to improve a business effectively.

The Chief Digital Officer, on the other hand, is a role that’s appearing more frequently and is becoming more necessary. In the most general sense, a digital officer oversees data and technology assets with a marketing and strategically sensitive eye.In many ways, a fruitful combination of the CIO, CTO, and CMO — and also, perhaps, their eventual successor — a CDO’s job is to constantly reshape a company’s structure and strategies to ensure that the company takes advantage of new technologies and data services, including those involving social and mobile.The most important role of the CDO is to anticipate disruption and remain focused on the need for reinvention and innovation within the organization. The speed of digital innovation and disruption is accelerating and organizations must have a leader dedicated to staying ahead of the curve. The CDO must have the foresight to see where the industry is headed, but also the internal clout to get it done. This can involve sparring with board members and other C-suite execs - conflicts between CIOs and CDOs can be frequent, as tech-stacks struggle to keep up with new integrations.All of these responsibilities makes the CDO a challenging but critical position for any company hoping to become a digital (and therefore industry) leader.

Differences in roles and responsibilities aside, most of these officers are working toward a greater common goal: using tech to better business.Although some positions are certainly more data-driven while others are geared toward marketing, it is most important to note that companies are increasingly assigning C-level roles to people who know how to seamlessly blend technology into an overall business strategy and daily operations.Many of these positions didn’t exist a decade or two ago, with the CDO specifically becoming an increasingly sought-after title — more and more former CDO’s are being appointed to CEO spots, thanks to their importance in driving company growth.Ultimately, the names of these positions does not matter — what matters is that a company devotes the necessary resources to hiring, training, and capitalizing on C-level digital experts.As the business world continues to spin on a data-tilted axis, making the move from conventional business models to tech-driven ones is more important than ever, and most importantly, in the digital world, is that all of these positions — and the people that fill them — are on the same page working together to develop a cohesive 360-degree approach to business that exists outside of technical titles.