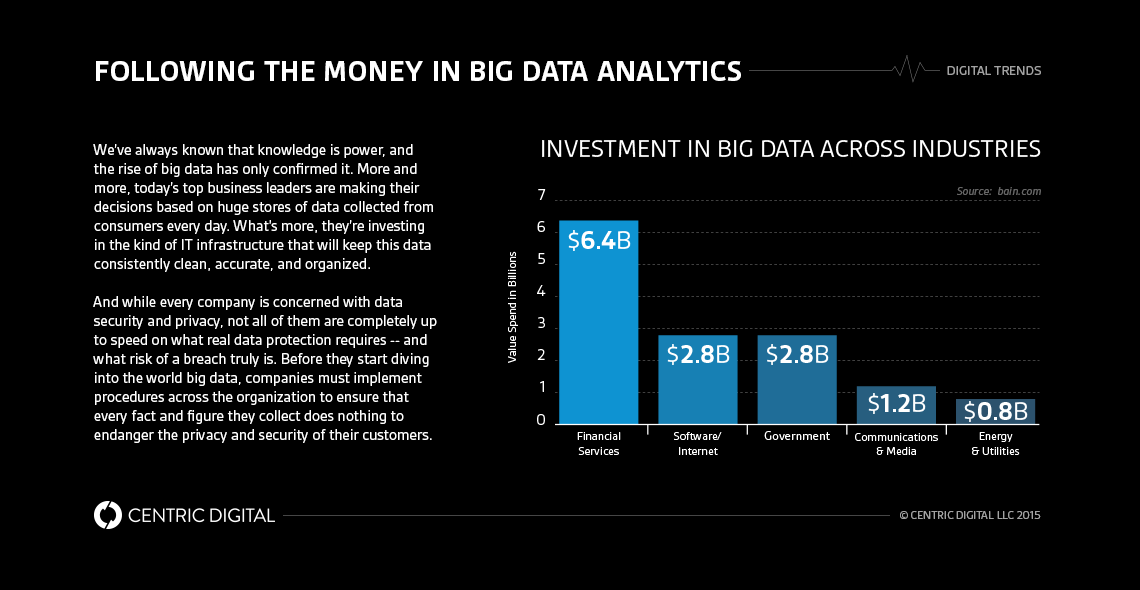 Despite what you might think, big data is more than just a buzzword -- it’s a set of involved practices that requires great coordination and planning to understand properly.The time to question big data as a fad is over. Its use is ubiquitous in corporate America, and the ever-decreasing barrier to utilize big data means that soon even the smallest shops will be able to make data-driven business decisions. Whether for end-user analysis or operations optimization, properly analyzed big data can improve every aspect of an organization’s operations.In other words, big data is as powerful as people say it is. It's not just one of the hottest trends in business, but a vital practice that’s here to stay, and that means everyone should hop on its bandwagon sooner than later.But all that power comes with a lot of responsibility. Instead of just thinking about what this practice can potentially do for you, we should consider what goes into its entire lifecycle. Big data is a broad term and includes several activities, including the organization, analysis, visualization, and sharing vast troves of information your company collects.As former FBI Director Robert Mueller said, “There are only two types of companies: those that have been hacked, and those that will be.” With major companies like Target, Home Depot, and Ebay victims of major security breaches, any one is susceptible. Your highest concern should be the security of the storage of your, which comes in large and very complex sets. You should also be extremely diligent in the releasing of your data to avoid any potential privacy violations. In a recent poll, General Counsels in a variety of companies across the U.S. cited data protection and security as one of their major concerns -- so how do you make your data safer?

Before you devise a strategy for keeping your data safe, it’s first important to understand the difference between security and privacy.Data security refers to all the measures that must be put in place to ensure data is being accessed by the right people, and that the data itself is accurate. These measures include basic measures, like keeping track of which accounts have access to your big data and shutting down inactive ones. They also include more active activities, such as using both software and personnel to audit large clusters of incoming data, as well as monitoring who is accessing this data in real time. While software security is important to protecting data, social security is equally important. Many data breaches occur when an employee is not being diligent with her credentials and falls prey to a phishing attack. The devastating Anthem data breach from earlier this year occurred because of this very reason.Data privacy, on the other hand, refers to the appropriate use of that data. It means that the data isn't being sold or traded, and that the privacy of individuals aren't being violated. If your company relies on third-party cloud services, best practices dictate that you move your big data infrastructure to a private cloud server. This limits the number of “third-parties” who could potentially give up access to your account. When releasing this data for specific case studies or reports, be vigilant in its anonymization. In 2007, Netflix released a dataset of 500,000 users’ movie ratings. Researchers at University of Texas at Austin cross-referenced those ratings with ratings on IMDB and were able to identify Netflix users, and subsequently their political leanings, and other sensitive information.

The opportunities for big data depend on your industry, but they’re endless in nearly every vertical -- especially in healthcare. The applications in this sector range from predictive analytics to personalized and actionable experiences. Theranos, a medical testing startup, provides comprehensive medical testing direct to the consumer in under 48-hours. With results delivered electronically and requirements to adhere to HIPAA, Theranos holds the highest standards for digital security.But as exciting as the potential for big data is in the healthcare industry, it comes with an equal amount of risk. Developments like APIs and Telehealth could revolutionize treatment and improve doctor’s abilities to diagnose health problems, alleviating the headaches that changing providers or distance once caused. The myriad companies like Teladoc embracing telehealth and the investments behind them show an increased interest in the new healthcare modality. Before its breach, Anthem announced it would offer telehealth visits with no copay to Medicare Advantage customers. However, the health insurer’s dubious security protocols may give its customers pause when considering electronic care. Clearly, dealing with massive amounts of private health information (PHI), these technologies require careful data protection practices if they’re going to be used responsibly.While it’s easy to get starry-eyed at the promise of quick insights about customers and competitors, what you could gain from big data won’t come close to what you could lose if security is breached. A lazy approach to data security and privacy will not only earn your company negative publicity and lose the trust of customers, but could end up getting you slapped with heavy regulatory fees. Ensuring that your company thinks about the entire process of collecting, using, and storing data will help keep you safe from risks down the road.