Augmented and Virtual Reality Trends for 2017

On:
Augmented Reality
On:
Digital Trends 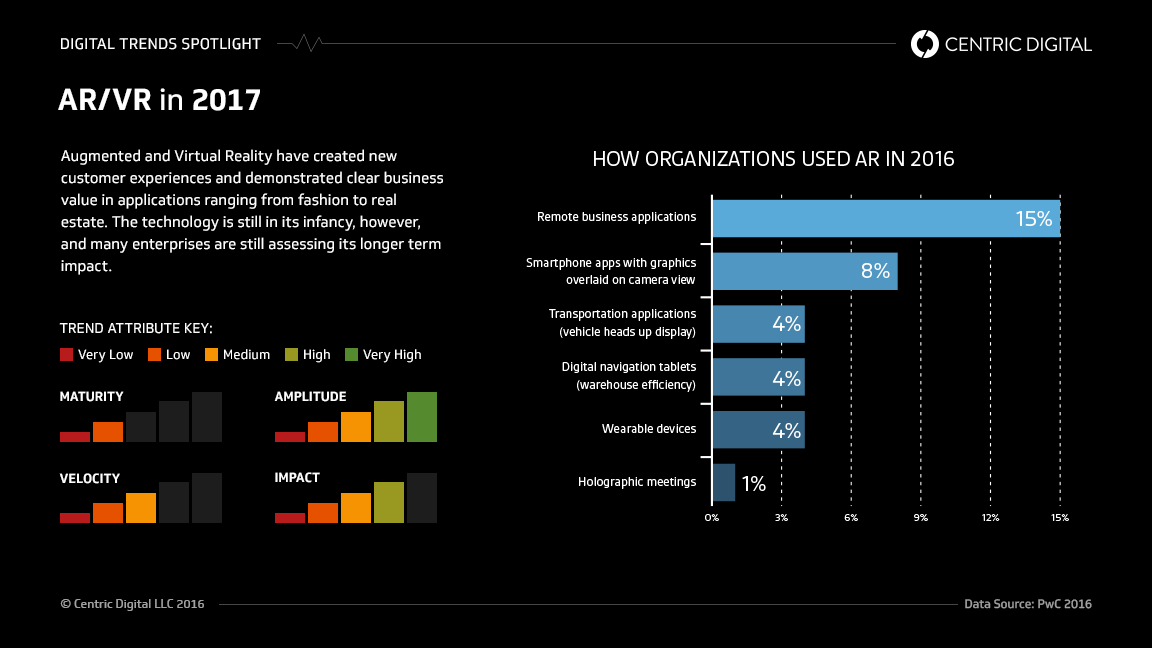 Enterprises should monitor advancements and implementation of virtual and augmented reality carefully due to its potential for massive disruption and profound implications for user experience in 2017.

The Technology Is Exciting, and the Future Looks Bright

Immersive computer trends have been steadily advancing for years and have created a high level of excitement among several industries. In fact, this concept can be traced back to the 1970s, where many have compared the current trajectory of virtual reality / augmented reality (VR / AR) technology to the first mobile phones from almost 50 years ago.Within the last several years, mobile technology has advanced further from standard calls and messaging into a connected device hosting a world of mobile applications. The proliferation of mobile applications and devices is well documented. However, the trend toward stand-alone mobile apps appears to be at its peak as, according to Gartner, at least 20% of brands will abandon their mobile apps by 2019. The reasons for this vary, but the most prominent justifications appear centered around cost and user engagement. With maintenance, upgrades, and customer support costs for mobile apps increasing, user engagement will be key to a successful ROI. This creates a profound use case for the adoption of virtual and augmented reality (VR/AR) to increase engagement within an existing device and mobile applications and to create new VR/AR ecosystems.Virtual and augmented reality deliver a profoundly different and exciting way of interacting with computing environments beyond today’s traditional device ecosystem. To date, VR/AR applications in the market are fascinating consumers as they unlock rich, immersive experiences. As the technology matures, these experiences will create new opportunities and value for both consumers and businesses.

Breakdown of the Industry

Generally speaking, the VR/AR space can first be divided into the following layers across enterprise and consumers, and then further sliced into targeted areas:

Source: CB InsightsThe possibilities and use cases for VR/AR go beyond today’s conventional thinking. When hearing of virtual or augmented reality tech, most consumers immediately think of the gaming industry, which, when using the above matrix touches only one area of the VR/AR map, endpoints. There has been substantial investment activity and development in endpoints driven largely by companies like Oculus, Magic Leap, Microsoft's HoloLens, and Google with their Glass and Cardboard products. This has led to a consumer perception of VR/AR products as predominantly an endpoint, consumer-focused technology. Software and content categories, however, represent a larger opportunity. As consumers adopt VR/AR tech in greater numbers and “cross the chasm,” the full extent of these opportunities will be unlocked. We are still very much in the early days of immersive computing and VR/AR, while gaining larger visibility with consumers, is still a nascent industry.Companies interested in this technology is not limited to existing VR/AR players in the market today. Broadly, as Digit-Capital states, “Another half a billion dollars was invested into virtual and augmented reality startups in the third quarter of [2016], with a record $2.3 billion dollars invested in the last 12 months.” Surprisingly, while the number of companies interested in VR/AR tech is high, investment in the technology is driven by a few big VC’s Fidelity, Intel Capital and corporate entities Amazon and Alibaba who accounted for 86% of VR/AR investment in Q3 of 2016. With the start of the new year and increasing adoption of VR/AR tech, it’s anticipated more companies will invest in these future capabilities and their potential for business and consumer applications.

Virtual and Augmented reality holds great potential for several industries, including retail. As a Goldman Sachs report discloses, ecommerce is a $1.5 trillion market today while representing 6% of all retail spending worldwide. Goldman believes the tech has the potential to revolutionize the ecommerce, opening previously untouched and/or difficult high-end portions of the retail market to ecommerce driven solutions on the back of VR/AR.Early examples of this potential can be seen from the ecommerce platform provider Shopify’s, Thread Studio. Shopify launched the solution in September and, while currently exclusively available for the HTC Vive, they have plans to expand to other VR/AR devices. As the head of VR at Shopify shares on Medium, “Thread Studio is a new and interactive way of testing out t-shirt designs.” The user gets placed inside a virtual photo studio, where he or she can upload pre-created designs and lay them on a shirt currently dressed on a mannequin. The personal experience offered through this platform does not end simply at shirt design but extends to Shopify’s other merchandise and clothing with the ability to position the mannequin as the user sees fit.This is not the first time virtual reality has taken retail to the next level. As previously stated, retailers are interested in using these emerging technologies to build a greater competitive advantage and increase customer affinity for the brand. Virtual reality technology is undeniably beneficial to personalizing the customer experience.Within the past year, the VR/AR industry has watched two well known companies Microsoft and Volvo come together to further advance technology within the retail space. Volvo has taken heightened interested in streamlining the buying process for the consumer by deploying augmented reality. This experience is slightly different than virtual reality as the user is not fully immersed in the technology. A Business Insider interview with Nina Larsen, director of Volvo’s retail marketing reveals that, “The Hololens can allow our customers to see features, colors, options. So rather than working on the computer seeing things, you can be part of the experience.” Not only does this technology help visualize the car the buyer may purchase, but it also explains more difficult features within the vehicle. Under this sense, VR/AR technology can also be used as a more advanced teaching device with full immersion.In addition to the retail industry, the healthcare industry has the potential to benefit greatly from the integration of VR and AR technologies in a variety of ways including, diagnosis, planning, training, and even treatments. The benefits of implementing these technologies could have a profound impact on patient and doctor relations and how primary and secondary care is delivered. While the technology is still in the beginning stages of implementation, some companies are investing in research to bring VR/AR healthcare applications to life.Immersive Touch is a surgical virtual reality platform that allows surgeons to see, feel and experience surgeries before completing them in a live surgery. The use of simulators can give these surgeons the opportunity to perform and practice minimally invasive surgical procedures with the tools that are used in the procedure. VR/AR components include surgery specific instruments and the use of ultrasound guidance for use during the surgery.Another example can be seen in Infinadeck. Infinadeck is conducting research on how omnidirectional treadmills can be used for physical therapy when introduced to a virtual reality headset. Early trials have identified a use case to help people recovering from traumas to more quickly regain balance and movement with fewer falls. In addition to defined medical uses, Infinadeck’s technology has the potential to gamify exercise, prompting people to exercise more with the intention of promoting healthier lifestyles and reducing long-term healthcare needs.VR and AR technology will continue to receive heavy investment in 2017 and enterprises should continue to monitor this space as consumer and business adoption rates are sure to accelerate. Immersive and augmented user experiences will be driven by VR/AR technology and forward-leaning companies will want to be first movers or fast followers to ensure they are not left behind as consumer and business applications in the VR/AR world blossom.