10 Regtech Stats You Should Know About 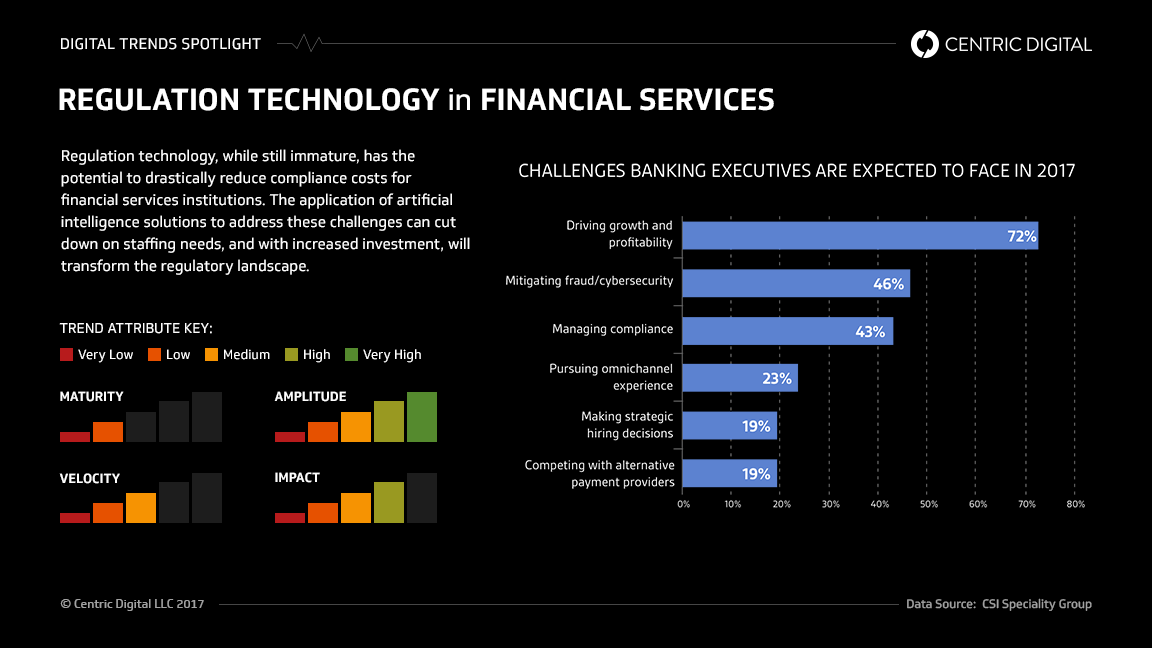 The stunning growth of financial regulations in recent years has reached proportions that almost defy belief. One frustrated London think tank commented that if all the current regulations were printed out and stacked into one column, it would be three times higher than the Eiffel Tower. The statistics below give some substance to this estimate. They also outline a new area into which artificial intelligence (AI) offers solutions. A new sector of AI-based solutions, collectively termed "regulatory technology" or RegTech, promises a digital transformation that will provide a pathway for financial institutions out of this costly tangle.

That staggering figure represents a number of fines levied on businesses since 2008, according to a study in the Northwest Journal of International Law and Business. Artificial intelligence powers scalable, flexible technologies, which save companies money and time. As the financial industry continues its digital transformation, much of it will center on these big data analytic tools.

A report profiled by global accounting organization ACCA found that the sheer quantity of announcements and revisions in the regulatory landscape had quintupled since the 2008-09 financial crisis. This skyrocketing change rate is expected to continue in coming years, especially in Asia, due to the complexities of cross-border trade. ACCA notes that "financial institutions in Asia now spend an estimated $1.5 billion annually on anti-money laundering compliance alone." Artificial intelligence makes it possible to find RegTech solutions that can mitigate this costly trend.

A TABB report highlighted in Forbes found that regulators generated more than 50,000 documents between 2009 and 2014, a five-fold increase over the previous five years. The article notes that "Regulations come too fast, organizations change too quickly and there's just too much happening in finance to address regulations with manual processes." Digital transformation can be tricky to steer in such a dense regulatory environment.

4. 10 to 15 Percent of Staff Dedicate Their Time to Compliance

This statistic relates to the average financial institution. It highlights the need for AI solutions to manage the firehose of compliance demands because it's simply becoming too expensive and time-consuming to address it with personnel power.

Compliance and controls for an institution such as HSBC and Deutsche Bank now cost over $1 billion, spurring them towards digital transformation. What's more, as the following chart shows, the culprit for runaway costs is anti-fraud measures. These have risen from just 14 percent of RegTech investment in 2014 to almost half of that spending in 2016.

Right now, the global market on governance, compliance, and risk is already around $80 billion, and that figure is expected to grow to $120 billion in the next five years. Banks are working to mitigate these costs by increasingly using artificial intelligence in their RegTech solutions, according to this article.

The RegTech industry represents a major focus for investors, as the urgent need for digital transformation becomes increasingly obvious. In the first quarter of 2017 alone, 34 deals were completed, totaling $238 million. This represents a year-over-year growth rate of 102 percent.

This figure, from the TABB group report, was tracked by CB Insights over the period between 2012 and 2016. This report states that artificial intelligence, along with advanced analytics and the public cloud have made legacy approaches to compliance unviable.

The FinTech Times points out that this British city leads global growth in the RegTech industry. In 2016 alone, investors put $678 million into 70 RegTech deals. Onfido, which offers identity verification powered by AI, accounted for an impressive $25 million funding round.Looking at the following chart, it's instructive to see how far out in front the UK and Ireland are, in terms of RegTech investment.

The chart below, however, shows that after London, the next six cities in order of RegTech investment magnitude are all located in the United States, with Palo Alto leading the pack.

These giants of venture capital are going all in on RegTech, recognizing the window of opportunity that exists. Right now the compliance demands are greater than human staff at financial institutions can handle, but AI solutions are still just sprouting up in a very new field. The interaction between compliance demands and digital transformation will undoubtedly stabilize in the near future, but at the moment there's a certain "wild west" feeling to the RegTech landscape.The chart below, from CB Insights, shows the growth trend in RegTech between 2011 and 2016. Figures for 2017 are expected to continue the rising trajectory.

London's FinTech Times defines the situation concisely: "As financial institutions continue to face ever increasing regulations, accompanied by spiraling costs and complexity, they become even more receptive to innovative companies that can offer technology-based solutions." Those innovative startups are putting artificial intelligence to work in a true digital transformation that will allow institutions to stay afloat in the rising flood of regulations.