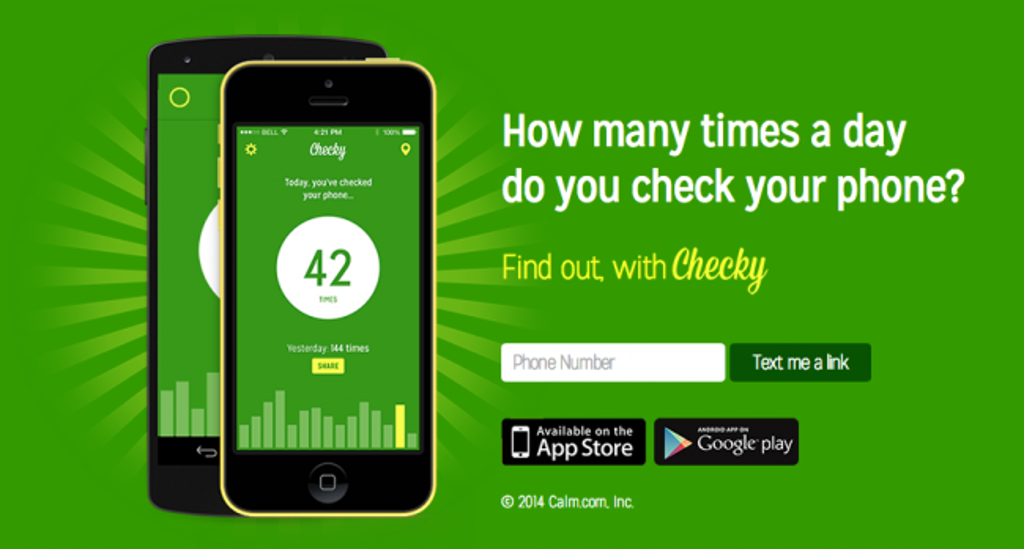 You probably check your phone more than you think.

Or at least that’s the idea behind Checky, a simple new app that counts the number of times a day a user checks his smartphone. (As of writing this post, I’m at 49.) Checky is a cleverly conceived promotion for partner app Calm, implicitly encouraging users to download the medication app to cope with the stress of their recently-realized smartphone overexposure, but it also calls attention to a larger digital trend. Not only is mobile adoption on the rise (90% of American adults now have a cell phone, and 58% of those are smartphones) but we’re more addicted to our phones than ever before.

For most smartphone users, app notifications and text messages are a constant, comfortable interruption, and checking for them is so engrained in our daily life that we hardly notice we’re doing it. (Before I saw my count at 49, I had guessed I was around 22.) In a 2013 study, 63% of respondents admitted to checking their phone once an hour, and 9% said they checked it every 5 minutes.

And it’s no wonder: according to Dr. David Greenfield an Assistant Clinical Professor of Psychiatry at the University of Connecticut School of Medicine, checking your phone for updates elicits the same physiological reaction as addition to a drug.

"Every time you get a notification from your phone, there's a little elevation in dopamine that says you might have something that's compelling, whether that's a text message from someone you like, an email, or anything," Greenfield said. "The thing is you don't know what it's going to be or when you're going to get it, and that's what compels the brain to keep checking. It's like the world's smallest slot machine.”

In extreme cases, severe psychological attachment has been labeled as "nomophobia" (short for no-mobile-phone phobia), with symptoms including incessantly checking for notifications, the inability to concentrate, and feelings of panic or desperation when separated from the phone. Have you ever been convinced that your phone was vibrating in your pocket when it definitely wasn’t? That’s called Cellphone Vibration Syndrome, and it’s an early warning sign of serious mobile obsession.

Checky’s value is that by quantifying our rapid, often-meaningless smartphone interactions, it’s making us brutally, awkwardly aware of how we use our phones. Now, the onus is on us to use this knowledge to make our digital experiences better.

As a user, I know I’ll think twice the next time I mindlessly reach for my phone without any reason at all. And more importantly, for product managers, mobile developers, and anyone else designing digital user experiences: follow Google's Lead ensure that your interaction model can provide users with a targeted, high-value experience in a short amount of time. By keeping quick smartphone interactions personalized, valuable, and appropriate, you’ll prevent users from the hangover of meaningless digital overexposure.