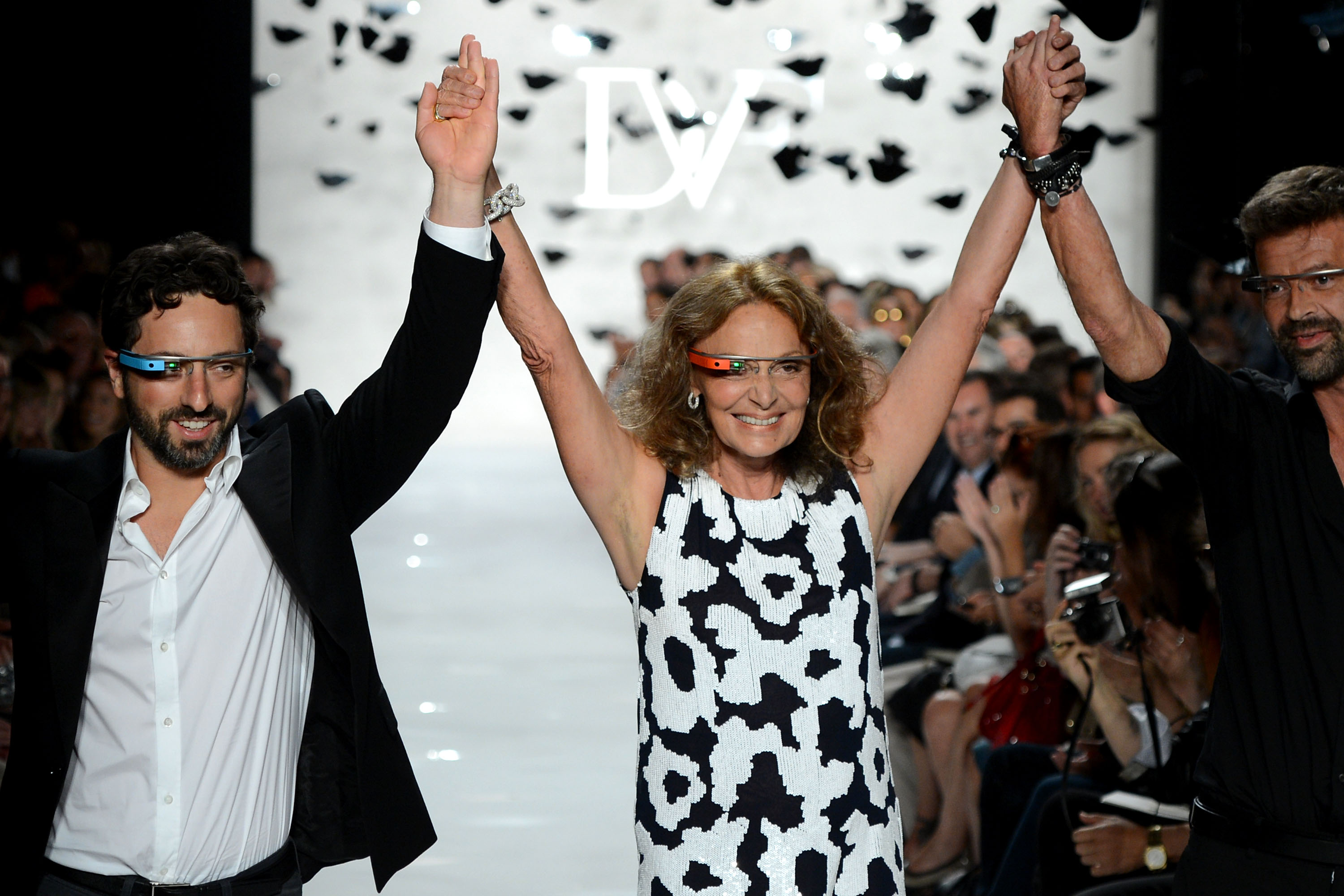 Accenture’s John Curran sees our current day as a

“real inflection point for wearable devices," viewing the devices as "moving from niche applications and early adopters into much more mainstream products."

In the past, wearable technology had generated more buzz in the fitness + tech communities rather than mass public sales, but thanks to a strong partnership with fashion, momentum is growing with the infusion of fresh design. Manufacturers like Nike and Jawbone have arisen interest for wearables, but the design has resulted in bulky watches, bright wristbands and arm straps that don't translate into evenings.

Technology is getting a fashion makeover

Trendsetter Diane Von Furstenberg started the movement in 2012 with her collaboration with Google. Her spring/summer 2013 models sported Google glasses, and DVF designed removable frames designed to allow one to personalize their Google glasses.Samsung followed suit a year later by partnering up with Alexander Wang, creative director at Balenciaga. Wang was challenged to create the industry’s first designer print using crowd-sourced sketches and images using the Galaxy Note II. The print was then put onto a bag, which was sold to benefit Art Start, a charity that uses the arts to nurture the talents of at-risk children.Earlier this year, Opening Ceremony became the first big fashion brand to team up with Intel, a technology giant, to design a piece of wearable tech with a cooler edge. Details have yet to be shared but we are told the piece is set to be released before 2015.Most recently and most widespread, Tory Burch released a collection for the Fitbit flex. The product line involves a large bracelet, pendant necklace and two silicon bracelets imprinted with a Tory Burch –style pattern. Fitbit’s CEO, James Park explained he sees “a future where there’s a Fitbit for every occasion”, and the Tory Burch products allow owners to continue to wear their tracker late into the night.

We are in a time where developers are moving beyond just counting paces, and looking to augment the body with sensors and displays, and fashion helps bring the tech to the public.

“Fashion can be a good way to humanize technology”

said Sabrina Horn, head of the Horn Group, a digital communications agency, who noted that technology companies “often forget to strike that emotional connection with consumers.” Fashion and technology are coming together, and need each other’s talent to build a sustainable brand for the future.

To create that connection, tech companies have been hiring leaders in the fashion world to lead new projects. Tech and Fashion’s fight over talent has only begun. This trend started with the immersion of successful companies like Gilt and Birchbox from the “fashion tech” sector, but has spilled over into the big tech companies as well. Google’s recent hire of Ivy Ross, a former Gap, Coach and Mattel executive to head the Glass unit and Apple’s hire of former Burberry chief Angela Ahrendts to lead the retain business are only two examples of this fusion.

Nike’s Chief Talent Scout Michael Leming describes it as a “morphing” between fashion and technology. With aesthetics being as important as the devices these days, tech execs are hiring fashion powerhouses in the hopes of their new hires will bring their taste with them. Leaders have to be more broadly skilled than before: they have to be able to respond to a customer base that wants tech and fashion in one package.

In the future, Karen Harvey, head of Karen Harvey Consulting Group, says she expects luxury fashion brands will start pulling tech professionals onto their teams too. Many brands are still hesitating to get involved with e-commerce, with these concerns stemming from the lack of knowledge of digital. Current luxury e-tailers are also expected to join into the battle. Faced with ever growing data and no one in their company skilled on how to integrate the influx of data, they are at a loss. Due this “war for talent”, the fashion and tech worlds are getting closer.

The Future of Wearables

One thing is for sure, we have a lot to look forward to in terms of wearable tech. While Google Glass and Nike Fuelband certainly have their drawbacks, they have paved the way to body–integrated computing. But no matter which fashion powerhouse collaborates with the latest tech giant- there is a simple theme to bring the product to market. Design for the user. It's not enough to be fashionable or technically savvy, consumers want both.

We see the boundaries dissolving between technology and people, with wearables finding a place in the everyday. Businesses outside of retail could use the wearable trend evolution as a framework to become more digital and customer centric. The incorporation of wearable into daily life will provide businesses with all sorts of data they can use to improve their customer experience and products. These two seemingly disparate worlds have become increasingly intertwined over the last decade, and will only continued to be more so.