On:
Augmented Reality
On:
Digital Strategy
On:
Virtual Reality 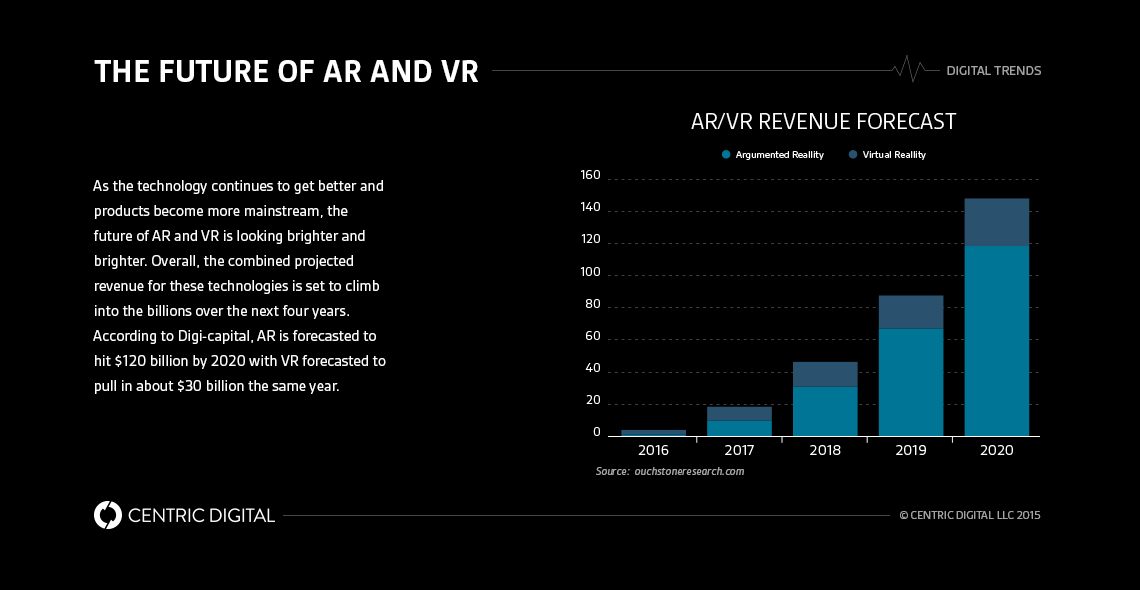 How is augmented reality helping businesses change the physical world as we know it?As I shared in Part 1 of this series, 2016 has some big things in store on the Virtual Reality (VR) front—but Augmented Reality (AR) isn’t lacking for progress either.Just this week, Meta, an augmented reality glasses company, released a major hype video where technology and industry leaders talk about their positive experiences with a soon-to-be-revealed device. “This was the first time I’ve ever put something on and felt that I was living in that future that I had been promised for all these years,” states Alexis Ohanian, founder of Reddit in the video. Whether or not Meta’s new device will live up to the hype is yet to be determined—however, it’s advances like this that are opening the future to the possibilities of AR experiences.

Augmented reality essentially brings digital elements into the real world. A foundation of reality is required for AR to work. This is unlike virtual reality which can be used to create something self-sustaining and fully immersive.Through proliferation of smartphones, AR’s potential has been around for quite some time and offers a way to enhance reality with digital interactivity. The best example of this in action is a QR code: in the physical world it’s just an odd-looking square, but you can then use your smartphone to digitally interact with it, transforming the code into a link you can “click” with a camera.

In 2012, I worked on a promotional AR game for Hasbro’s NERF line. The game allowed iPhone users to blast virtual floating targets that appeared in the physical area around them . We evolved this technology beyond gameplay, too. We took the smatphone QR code concept and made entire boxes scannable to unlock additional blasters. By pointing a device’s camera at certain boxes, users could see the actual blaster retail box to confirm it was recognized and could be scanned.Aside from my direct experience, there are several other companies who are using AR to enhance the customer experience.Realizing that “Upwards of 75% of customers decide to forgo a paint project because they cannot decide on a color,” the Home Depot turned to AR. They created the new Project Color App which allows users to see how paint colors will look on the walls in their actual homes. Users can play with different paint options for their space while the app accounts for the room’s specific dimensions, lighting, and shadows.Beyond mobile applications, AR can be implemented using at-home applications. Retailers could save customers a trip to the store by providing AR experiences for trying on clothes. All users would need to do is turn on the computer’s camera, select something to try on, and then watch the clothes virtually appear on their body.This is not a far-fetched idea—Intel has been widely dispersing their own RealSense 3D camera technology to a wide range of Windows 10 and Android devices. This allows applications to factor in real-world elements and captures them with ease and precision.Looking further into the future, one of the most exciting uses of AR is coming from Microsoft and their HoloLens head-mounted display (HMD). The concept goes beyond the idea that AR is for an application-by-application basis, by bringing the Windows 10 OS into any environment. When a user puts on the HoloLens headset, holograms are projected onto the world around them, allowing them to complete various computing tasks. Microsoft demoed uses for this which includes 3D modeling, watching videos on a screen that’s not there, and, of course, playing a version of Minecraft that has a world mapped to any surface.AR is a unique beast—and it’s currently right there, at your disposal, sitting in your hand if you’re reading this on your phone (or in front of you if you’re using a laptop and own a webcam).Unlike VR, the uses of AR have existed for a while—yet both AR and VR have seen their successes and failures in recent years. As the tech becomes more powerful and capable, a larger world of opportunity will expand and what you can render in the real world become nearly limitless. Forget reading on a screen, you could be looking at a sheet of paper that doesn’t physically exist just by equipping an AR head-mounted display. There’s a lot to look forward to with this technology.