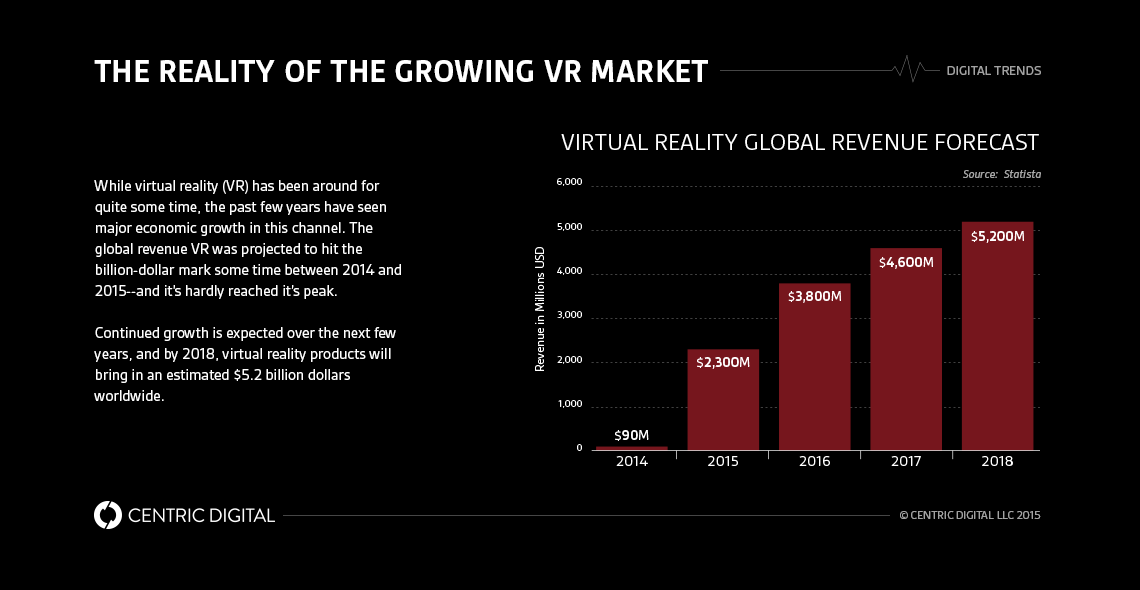 2016 will be a banner year for virtual reality, so what can we expect from this new frontier of digital experiences over the coming months?Facebook acquired virtual reality (VR) startup Oculus for $2 billion two years ago, and it was one of the many indicators that the digital experience frontier was about to change forever. In fact, VR hardware and software generated over $90 million in U.S. revenue in 2014, and that number has already grown to $2.3 billion in 2015 and a projected $5.2 billion by 2018.

We’ve seen quite a few exciting new hardware and software developments in the VR field that will start to take center stage in 2016. Specifically, the current emerging tech in this field includes:

While the bleeding edge of virtual reality as a platform is being driven by gaming at the moment, only a limited few in this demographic will be capable of running a Rift or Vive at launch.But accessibility is growing and will continue to do so across mobile platforms as they get more powerful and allow for more robust experiences using low-tech solutions like Cardboard. One mass-market example of this is Mattel's View Master, which is a glorified Cardboard shell with toy-like aesthetics.VR can and will go beyond games to open the door for applications such as virtual tourism, 3D-modeling and design software, new forms of social media and interaction, and more. However, the best applications will be the ones we haven't even thought of yet—the ones that will only become apparent as we truly understand the power of the platform.Speaking of which, one of the biggest hurdles VR is facing is a general lack of understanding about the tech and its implications and appeal. Unlike walking by someone who is watching a movie or playing a game, virtual reality needs to be experienced firsthand in order for it to be truly understood and appreciated.While this digital field is still emerging as a place of new business and revenue growth, you can bet that 2016 will be a banner year for VR and it’s digital transformation of the new digital economy.Overall, VR presents a new development platform that is based on total immersion. This is in contrast to the much-hyped augmented reality (AR), as VR transports its users somewhere that can be completely unique. We’ll be covering more on AR in the second part of this series, so stay tuned.