Getting Connected: The Rise of Smart Cities and The IoT 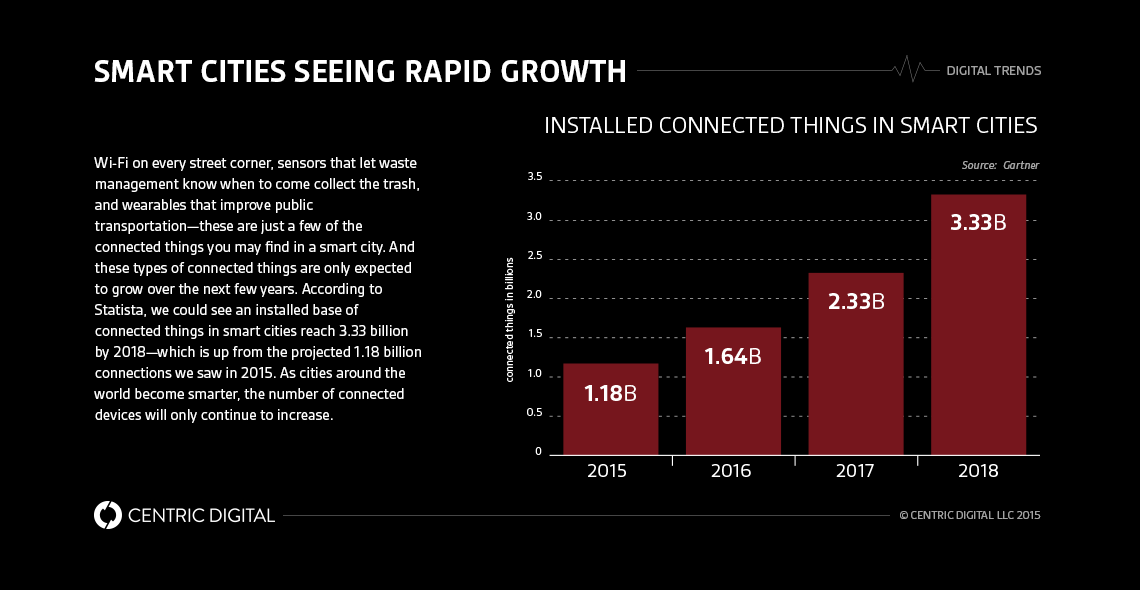 Will "Smart Cities" and the Internet of things help solve our cities problems and increase efficiency?According to one forecast, 1.7 billion Internet-connected "things" will be added to smart cities in the next two years, more than doubling the current number. This digital transformation will encourage planners to not only consider how to use the Internet of Things more efficiently, but also to re-explore the fundamental question of why they should use it at all.

Defining what counts as part of the Internet of Things is a tricky task, hence the somewhat unscientific term of "things." It's natural to consider devices and wearable tech, but many of the connected things that make up the IoT aren't traditional devices with which a user can interact. For example, many things will be sensors that exist solely to pass on data to a remote system. Using the term "units" is arguably the fairest way to track the growth in things requiring an Internet connection and the associated increase in network infrastructure.

Many analysts have examined the Internet of Things, and while their methodology may vary, they all predict steady growth.

Compare Gartner and Statista's numbers, and you'll notice how the proportion of worldwide IoT units cited in dedicated "smart cities" is forecast to drop from around 1 in 4 to 1 in 6 by 2020. However, the change is not a sign those overseeing smart cities can take it easy since it reflects the sector as a whole growing rather than smart cities slowing or declining. The forecasts also depend partly on the idea that smart cities will thrive, lead the way with their digital strategy, and inspire global consumers, businesses and government to step up involvement. It will become more — rather than less — important for smart city decision makers to cope with expansion.

Compare Gartner's predictions for 2016 and 2020, and you'll see the ratio of total spending-to-units is set to fall by around one-third. That drop is surprising given how Gartner and ITC predict a shift to more Internet of Things spending on infrastructure and systems than individual sensors and units.Part of this disparity will be down to the natural drop in per-unit pricing as the market becomes more competitive and production more efficient, but it's likely the answer may also lie in a report by UK organization Nesta, which foresees smart city bosses realizing the Internet of Things may be less suited to the traditional tech models of hugely expensive and powerful centralized hardware and better suited to using numerous, inexpensive units to gather data on a mass scale.It certainly makes sense, given that one of the key elements in making a city "a city" is the population size. For example, the Nesta report cites a Barcelona program to put sensors in trash cans and have garbage collection trucks only visit properties where the cans are filled to a certain level.The program works fine on a small scale, but it's also a situation that could provide city-wide solutions. By gathering and assessing such data from a whole city rather than concentrating on one day's route, planners could discover patterns that allow for a more efficient schedule for weekly collections. For example, data might reveal how householders tend to have a lot of cans and bottles ready for collection after a weekend, whereas areas near a student campus might follow a different pattern because the main "party night" is on a weekday.

In Search of Purpose

The Nesta report also highlights a valuable lesson from existing IoT projects: Future growth and success may be more dependent on an attitudinal shift than on technological advances. This lesson is based on a surprisingly fundamental yet easily forgotten point: Using the Internet of Things efficiently means solving an existing problem, not looking for a way to show off the technology.It's not surprising smart cities may have fallen into the trap of investing in IoT-related technologies because they seemed fashionable and exciting, or because technical staff and digital strategy consulting team made compelling and passionate pitches. It's certainly understandable how authority figures at a self-described "smart city" would want to use all the bells and whistles available to justify that label.However, the numbers indicate the IoT is no longer a novelty, and there are billions of units and trillions of dollars at stake. Given how city officials are under increasing pressure to operate more efficiently, it's time to start thinking of the IoT as a tool rather than a toy. Planners and those carrying out digital transformation consulting need to put more effort into finding out the true problems and challenges their cities face, and only afterward should they turn their attention to finding if and how the Internet of Things can offer the most effective and cost-efficient solution.