The Rise of Industrial IoT in Smart Cities 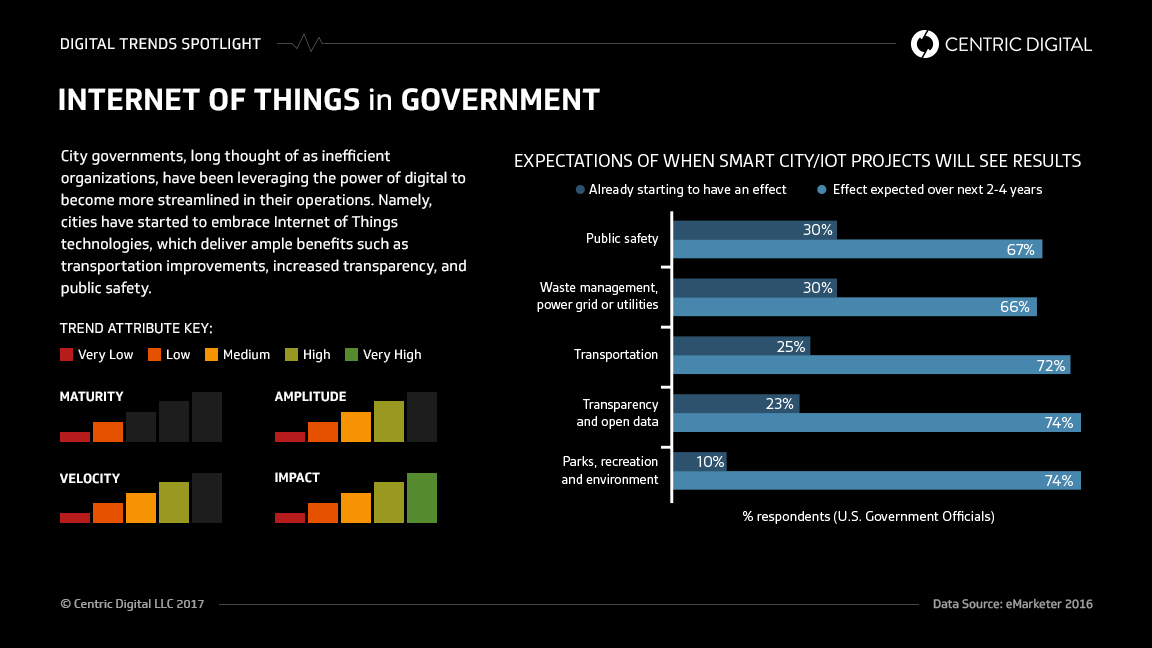 Though smart cities seem worlds apart from the non-digital past, their true potential has yet to be revealed. Several innovative systems already operating on the urban internet of things are using data to help cities function more robustly and efficiently.The industrial internet of things (IOT) began for the purpose of promoting efficiency in the commercial sector, but now its potential for public benefit is increasingly being recognized. Smart cities are leading the way to a new set of economies around data gathering, infrastructure decision-making and public utility technology. In September 2016, the White House created the Smart Cities Initiative, designed to help public, private and academic institutions work together on improving the nation's cities. Eighty million dollars in new federal investments was announced at the launching of this initiative, with the funds earmarked for an array of research and development areas. Furthermore, the smart city industry is expected to reach $400 billion in value by 2020, as 600 cities are expected to join the connected web.Here's an overview of five primary focus areas of urban IOT systems, showing how a forward-thinking digital outlook is already contributing to the well-being of cities around the world.

What Is a Smart City?

The term refers to joining physical infrastructure and services with technology, providing interactive real-time systems that improve people's lives and efficiency of service. Each city chooses its own unique combination of technological innovations, but all make use of sensors for collecting data about the physical environment. As data is gathered and analyzed, patterns are discerned and used to deliver better services and save money.

The Wall Street Journal points to a set of technological shifts that have together given birth to this age of civic analytics. These shifts include:

Using the public as data collectors isn't new -- it's the idea behind 911 and 311 systems. But smartphone apps in the hands of residents and public employees give cities new and more powerful ways to expand their data-collection efforts. Individual responses can be anonymized and joined together to make patterns that can govern the delivery of utilities and services.Specific technology is even being developed for this purpose: ZenCity is an artificial intelligence-based dashboard created for the express purpose of gathering citizen feedback and delivering it to cities, helping them develop "meaningful insights for city management and planning."

Smartphones as a Sensor Network

Writing about the various collection points for data in a smart city, ZenCity notes that "... For a city to truly become "smart," the citizens have to be a part ... we look at people and their smartphones as the largest network of sensors in any city ..."Citizens are motivated to use their smartphones for collecting and sharing data, because it's a win-win situation. In exchange for passive data collection, they receive personalized services and contextual data. Meanwhile, the public administration learns more about how citizens use its systems, spaces and services -- so it can constantly upgrade and improve them.

Louisville, Kentucky, demonstrates one beneficial use of citizen feedback in its program of handing out smart inhalers to more than 1,000 asthma sufferers. These inhalers are equipped with sensors to measure the GPS location of each use and the number of puffs that are dispensed. The feedback offers benefits to the entire urban community as well as to individuals. The city correlates clusters of inhaler use with localized pollution issues and has begun to take measures to curb the problem. Excessive particulates in one such area were mitigated by the planting of a greenbelt zone. In addition, individual participants gain a clearer sense of their own inhaler use, providing them and their physicians with better information to develop personalized treatment plans.

The arrival of IOT technology is revolutionizing the delivery of every urban utility, and cities across the world are embracing the new efficiencies.San Antonio has initiated nine separate smart grid projects, connecting individual electric meters as well as streetlights and gas and water meters for a total savings of over $20 million so far. Barcelona saved $58 million on its water by using smart meter technology, and a South Korean city is now saving 30 percent on its utility costs by regulating water and energy usage. The examples are too numerous to review, but one particularly interesting case concerns waste disposal.

New Approaches to Waste and Recycling

Figuring out what to do with waste and recycling is a never-ending challenge for large urban areas. Bigbelly puts chips and solar panels into waste and recycling containers so that the containers themselves can communicate with the city when they are full. Furthermore, its data can be used by private companies for marketing; if one area generates high levels of waste, the Bigbelly sensor can guide companies to market new solutions to consumers in that sector. Bigbelly speculates that eventually its smart trash containers may yield information on their contents, down to specific brand names.As an indication of what the future holds for connectivity, Bigbelly has reached out to cities to offer more than trash disposal. It's now deploying Wi-Fi units on its waste receptacles, helping cities spread a Wi-Fi canopy for citizen use throughout the city. This add-on service is a way of developing deeper relationships with municipalities so that Bigbelly will become essential to a city's core function. The service is currently being tested in parts of New York City.

Connected LED streetlights are a smart tech entry point for many cities. One benefit they offer is reduced crime -- the lights automatically brighten when there are multiple people in the area and dim when no one is around. In San Antonio, sensors on streetlights turn them on during very cloudy days to enhance visibility. Another way streetlights enhance safety is through use of ShotSpotter, a sound triangulation system that detects the sound of gunfire and notifies police. These sensors are now being included in smart streetlights as part of a collaboration between ShotSpotter and Current by GE.

A digital kiosk is a physical information node for citizens on the street. Gathering input from numerous sources, kiosks provide visitors with mapping services and information about local restaurants, stores, attractions and events. They can charge and sync with mobile devices to provide ongoing access to key local information. In many cities, kiosks also include public internet browsers through which visitors can ask questions and receive visual information on a large screen.Chicago's kiosk system provides access to city officials, creating a channel through which citizens can offer feedback and ask questions of the municipal administration. The kiosks also serve as electronic signboards, offering real-time updates on transportation systems and other news. They contain sensors that collect physical data on everything from air pollution and traffic congestion to noise levels, humidity, temperature and barometric pressure. New York and Washington, D.C., kiosk systems are already up and running, paying for themselves through digital advertising revenue.

One obvious route to improving people's city experiences is relieving the chronic parking problem. It's estimated that 30 to 40 percent of urban traffic congestion is caused by drivers looking for places to park. San Francisco now offers people an app that tells them when spaces are available in city parking garages, and the app will soon expand its capabilities to also locate open parking spots on the street. Traffic can be governed in other ways as well, of course. Palo Alto has installed a series of intelligent traffic signals, containing sensors that detect whether traffic is made up of buses, automobiles, bicycles, trucks or pedestrians. This enables light changes to be dynamic, and it also informs further infrastructure design, making intersections safer for everyone.

Connected devices are proliferating at an overwhelming rate; in just the past year, their number has increased by 42 percent and is estimated to reach 2.3 billion devices globally by the end of 2017. This rise in connectivity exposes innumerable vulnerabilities to the armies of cybercriminals. In April 2017, hackers disrupted the city of Dallas, Texas, by setting off 156 emergency sirens. Cities are implementing innovations unevenly, leaving themselves at risk as they strive to implement a digital strategy on slim budgets. Whether security is compromised by simple software bugs or inadequate protocols around encryption or authentication, the outcomes can be catastrophic. Where commercial hacks affect the financial well-being of individuals, IOT hacks can crash the control systems that govern basic physical necessities for an entire population. Back in 2011, hackers destroyed an Illinois water pumping system that served over 2,000 customers. Now, six years later, potential targets are much larger.Although the extent of innovations currently in place in the urban internet of things may seem huge when compared to the non-digital past, in fact we're only at the beginning of discovering the potential of wired cities. Stephen Goldsmith, director of the Innovations in Government Program at the Harvard Kennedy School, underlines the new connected reality: "In terms of city governance, we are at one of the most consequential periods in the last century."