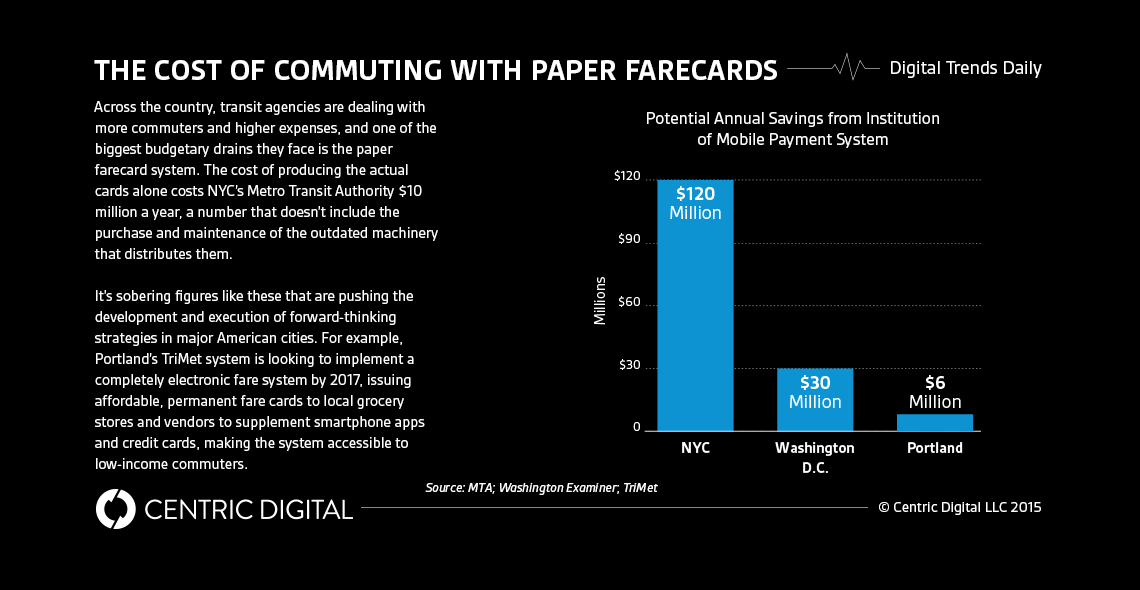 It’s been more than a decade since New York’s Metropolitan Transit Authority stopped using tokens to let commuters through its turnstiles. As we move to a paperless government, now’s the time to let the same fate befall the paper passcards used in major cities across the country.

Why They Have to Go

It’s not that these little yellow (or blue, or white, or green) cards haven’t served their purpose. Passcards like New York City’s MetroCard or Washington D.C.’s SmarTrip cards work by loading fare information from their magnetic strips onto an automated database.These passes have saved urban commuters everywhere a lot of trouble over the years, resulting in lighter pockets and greater convenience.But the drawbacks of this sophisticated yet archaic system have begun to wear on commuters — the slightest bend of the card’s thin plastic renders it incompatible with turnstiles. The cards are also disposable and easy to lose, making them common contributors to urban litter problems, according to New York Magaizine.Not only that, but they’re expensive for transit companies to produce, resulting in costs that lead to very unpopular fare hikes.

So what could relieve our dependence on the farecards we’re all so used to? The obvious choice would be an app for smartphones and even wearables like the Apple Watch that could use a scannable code to unlock turnstiles. These apps could identify individual users, making it easier to track purchases over time and harder to lose already purchased rides.Users could also purchase fare credits through the app itself, meaning that no one would ever miss their train again while fumbling with vending machines that are expensive and often unreliable, according to City Lab and Pix11.In fact, New York MTA spokesperson Kevin Ortiz told Fast Company last year that "MetroCards is a system that is reaching the end of its useful life,” citing mobile payment as the most viable potential alternative.Indeed, such a system has the potential to save any city a whole lot of money — in 2011, the Washington Examiner estimated that mobile transit payment could save the nation’s capital up to $30 million in a matter of years.As smartphone adoption continues to increase towards the point of a supermajority, there’s no doubt that app-based payment systems for urban rail transportation represent a legitimate solution, even if we don’t get rid of farecards entirely.Of course, we’ll still need those expensive vending machines to produce farecards, but by introducing a smartphone payment system, we could greatly reduce the strain on them, and we’d use fewer of them, meaning they would work more reliably and for longer periods without needing to be replaced.Despite Ortiz’s claim that a new system will be implemented by 2019, the MTA has made no public mention of progress on this front, or even suggested what the new system would look like. Until they do, straphangers will continue to wonder: Can we get rid of farecards already?