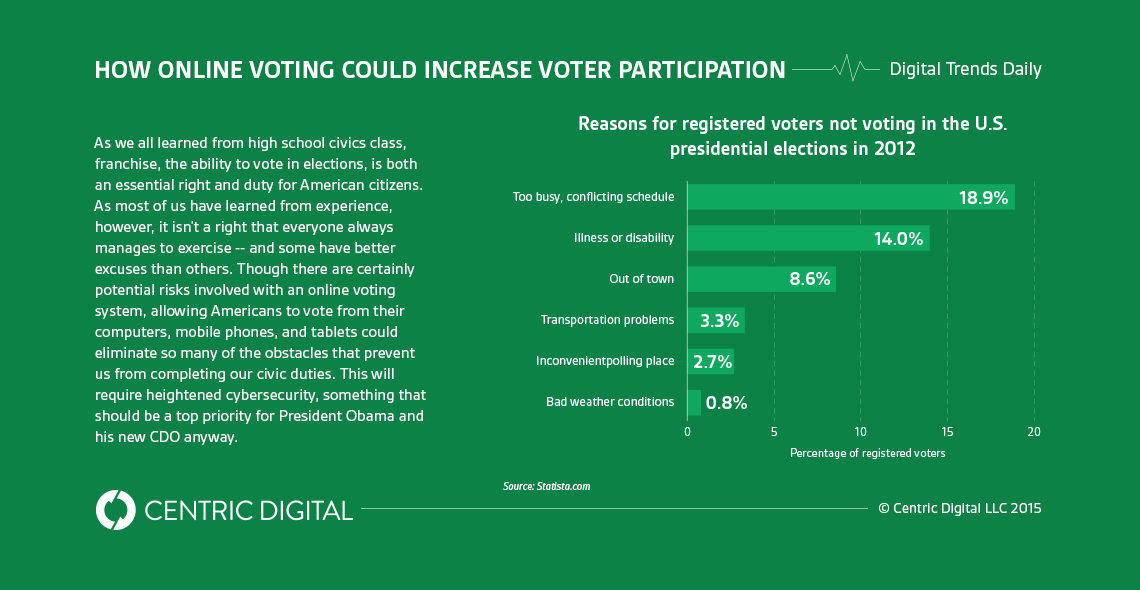 When former Twitter executive Jason Goldman was tapped as the first-ever White House CDO last month, details are still (understandably) vague on what his charter will be.President Obama announced “Our mission is to use every single tool available to ensure that all Americans can contribute to and benefit from our American resurgence.” In a Medium post, Goldman’s own description of his job had all the professional vagueness of a resume entry: “My job will be to use…online tools to create meaningful opportunities for American citizens to participate in our government.”The question is, will Goldman be completing the same old bureaucratic tasks with a fresh “digital” wrapper, or will he be overseeing something revolutionary -- something like online voting?

Though the idea of casting votes from our desktops or mobile devices might seem strange, there are plenty of reasons to start looking into such an initiative. The electronic voting machines currently being used in most polling places are badly outdated, and the funds to replace them and avoid potentially disastrous security and usability issues would be exorbitant, to say the least. Online voting would offer an incredibly affordable solution to this problem, and could also make the process easier for the elderly and citizens in the military stationed overseas.Of course, there are always those who are so often too lazy or too busy to vote. If the new system allows voters to send in ballots on their mobile devices, however, even these citizens would have literally no excuse to disengage from civic participation.What’s more, the idea has worked before, albeit on a much smaller scale. According to a study from the Atlantic Council, Estonia became the first country to use an online voting system to hold national elections in 2005. With an ID “smartcard” and PIN code issued by the government, citizens of the Baltic nation logged in to the voting system and anonymously submitted their ballots. Following many successful regional and national elections, both the government and electorate seem comfortable with the system and its security.

Still, it would be misleading to imply that such a system could work in the U.S. because of its success with a small population (Estonia’s is 1.2 million, according to the latest CIA estimates) and a country at relatively low risk for cyberattacks. Issuing individual ID cards to the entire American populace is something of a taller order, and in light of the prominent cyber security breaches at Target and the CIA’s Twitter account, it’s safe to say that we’d have to some serious improvements to comfortably hold a safe, web-based election in America.But the current method of electronic voting and its obsolete technology isn’t much less vulnerable to outside tampering. As the Atlantic Council report points out, “Paper-based voting can be manipulated easily in a number of ways, from ballot-stuffing to intimidation by corrupt officials.” The highly-sensitive 2014 Ukrainian presidential elections, which relied on traditional voting methods, were almost hijacked by state-sanctioned Russian hackers, proving that any voting system is susceptible to corruption without strong security measures and technologies in place.Improving the safety and security of America’s web communications is a high priority for the Obama administration. Once that task has been accomplished, the potential for initiatives like online voting is immense -- disenfranchisement and voter discrimination could be virtually eliminated by such a system. As the President and his CDO near the end of their terms, it’s hard to imagine more “meaningful opportunities for American citizens to participate in our government” than that.