As Microsoft Aims to Lead in Mobile, it May be Time to Revisit Your Mobile App Strategy 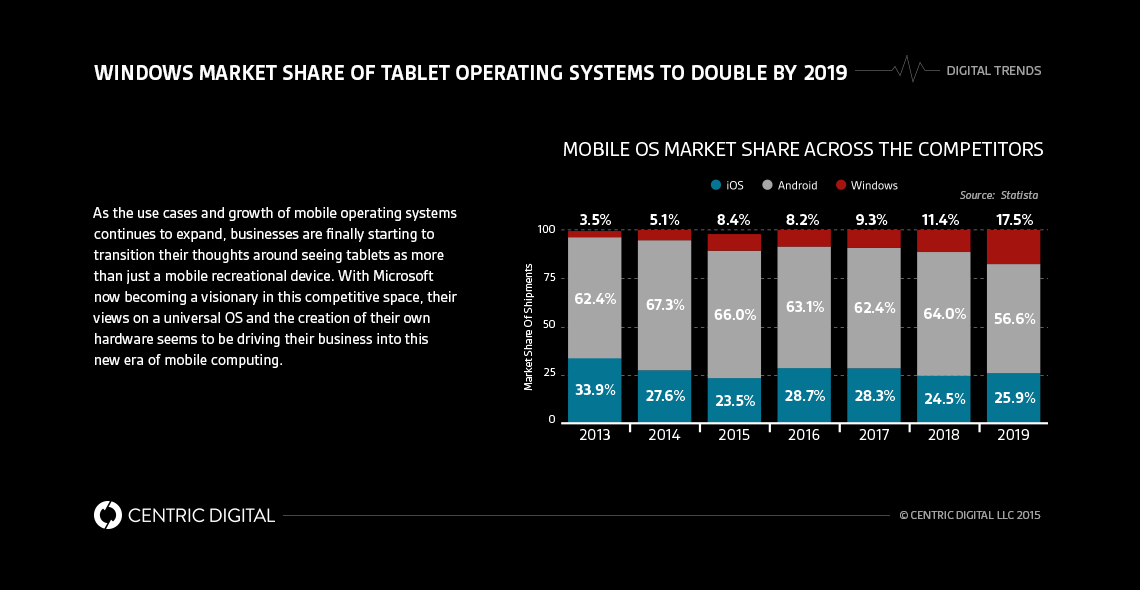 Microsoft Failed in Round One of Mobile

Like most of us, I started out my professional career working on a PC running Microsoft Windows. There's no shame in that. Apple wasn't really considered a device for business professionals (outside of design departments or firms) at the time and only a niche segment of passionate consumers held onto their Macintosh and other early Apple products.However in the 2000’s, Apple revived itself with consumer devices such as the iPod, iPhone, iPad, superior MacBook Pro laptops, iMac desktops, an intuitive operating system, robust app stores and downloadable media. Much like their famous “1984” commercial predicted (too early), they finally became the needed alternative to the declining quality of non-Apple PCs running buggy versions of Microsoft Windows (remember Vista?).As Apple’s consumer market share of PCs grew, consumers (who are also professionals) started to prefer the ease of Apple hardware and operating systems, and this preference started to make them a legitimate alternative to the Window’s PC at work. When Apple eventually launched its app store, they ended up attaining significant market share even after Google, Microsoft and Blackberry had launched theirs.In regards to Mobile app design, this was initially focused on iOS, followed by Android, but largely ignored Microsoft. Currently though, it appears that Microsoft’s universal OS is starting to turn around the growth potential of this sector of their business.

Is Microsoft In the Early Stages of a Revival?

While I've been a Apple Mac user for over a decade and thought I’d never touch a Microsoft product again in my life, the unveiling of some impressive devices by Microsoft this October (including the Surface Pro 4 laptop / tablet hybrid, the (not a watch) Microsoft Band and the Microsoft Book) has definitely broken my religion (as well as some of my diehard Apple loving colleagues).For one thing, Surface Pro 4 is a game changer because it finally delivers on the promise of a tablet that can replace a laptop. Some of the major improvements over the previous version include more screen real estate, a thinner and lighter profile, and laptop quality processing speed and battery life. Retrospectively, Tim Cook’s 2012 analogy of a Microsoft hybrid laptop / tablet being similar to hybrid refrigerator / toaster is eerily like Microsoft’s then CEO, Steve Ballmer’s 2007 scoffing at the iPhone maybe having a marketing size of a million consumers.Consumers want more capability, not more devices. Perhaps Apple is weighing their own cannibalization concerns over what customers need? Perhaps the fact that many said they like the concept of the Apple watch capability but not to replace their traditional watch which they see more as jewelry vs. the Microsoft Band strategy. Microsoft doesn’t appear to be trying replace a watch, but more or less expanding on a digital customers wants around a different business strategy.

What does this have to do with Mobile App Strategy?

Just like in how Apple went from almost bankrupt to flirting with being the largest company in the world in just over a decade, or how Blackberry went from the only professional mobile device to near death… perhaps Microsoft’s mobile strategy and products could quickly shift in consumer desire. So how does this relate to your digital strategy?Well just as many traditional enterprises are finally implementing their iOS and Android focused mobile app strategies, they may need to consider what a shift in device preference will mean. At minimum, it could require needing to support Microsoft's mobile operating system. But if this is just the beginning of a turnaround in Microsoft’s ability to deliver innovative products to the market, we may be in store for many more opportunities for traditional enterprises to excel in their tablet app strategy and mobile app strategy.