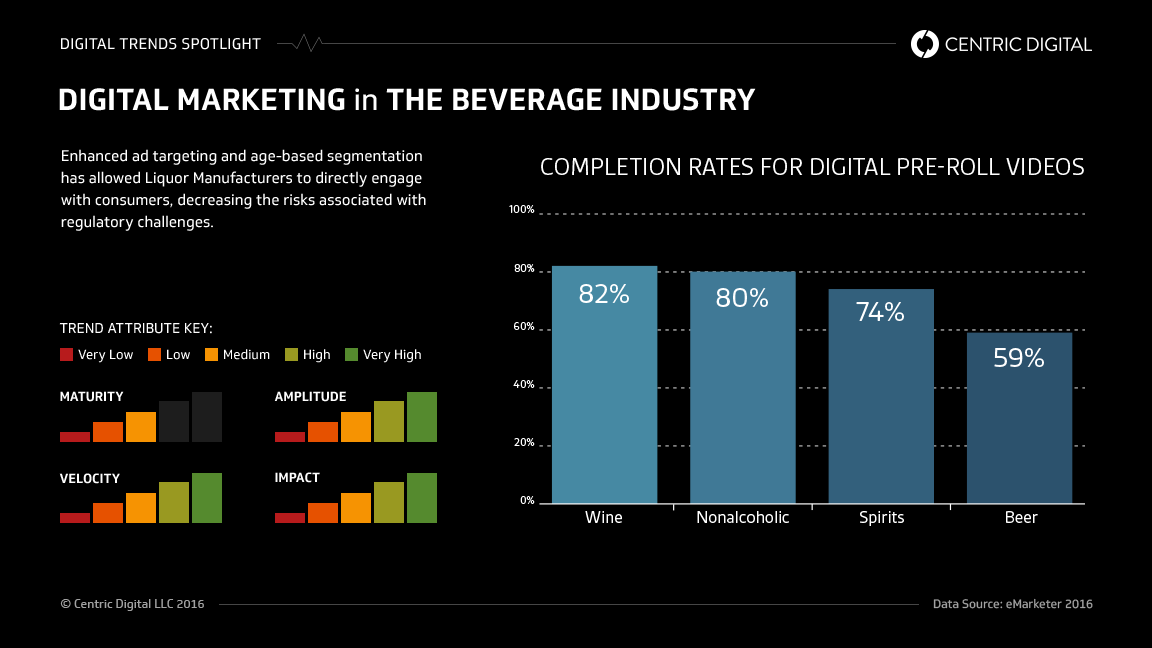 Now that the doors to social media have been opened wide for liquor manufacturers, your brand is able to share its identity in numerous fresh and powerful ways.The alcoholic beverage market tends to be fickle, and the tastes and preferences of consumers are highly changeable. To keep up with customer expectations, liquor manufacturers need to continually adapt and connect with each new generation of consumers, determining what they want and how to reach them; if they fail at this effort, another brand will quickly fill that void.Your company may have been slow to adopt digital marketing through social media because of the threat of breaking regulations by pitching to underage customers. However, a sound digital strategy offers new pathways for alcoholic beverage companies to establish connections with their customer base, expressing strong lifestyle characteristics for each brand and building consumer loyalty.

The Messaging Challenge for Liquor Manufacturers

The three major trade associations for alcoholic product suppliers (the Beer Institute, Wine Institute and Distilled Spirits Council of the United States) have voluntarily adopted codes for responsible online advertising and marketing. The purpose of these guidelines, which are periodically reviewed by the FTC, is mainly to ensure that liquor advertising targets users of legal drinking age. With some 95 percent of 12- to 17-year-olds now online , and 81 percent of these young users regularly participating in the major social media platforms, it has undoubtedly been challenging for your alcoholic beverage company to engage in the social media conversation that has become an essential element in today's marketing.The guidelines state that no alcohol-related marketing can be placed in media where fewer than 71.6 percent of the audience are of legal drinking age. Furthermore, greater restrictions apply to any direct interaction with a user: The whole value of social media lies in its potential for two-way conversations, and the age guidelines stated that each individual user had to affirm their age before they could receive any direct communication from a liquor manufacturing brand. Fortunately, the arrival of new digital capabilities has provided you with ways to abide by all relevant age laws and yet still engage in the full range of social media conversations.

Through the benefits of analytics, the age of users on social media platforms is entirely transparent. Unlike a one-way medium such as television advertising, where the ability to gauge the age of viewers is limited to generalizations, social media reveals facts about every single user. These big data demographics can be analyzed to conclusively demonstrate that the audience for liquor manufacturers' materials are adult. Furthermore, individual age gateways are easy to install through social media channels, enabling a personalized interactive experience with your brand.Sophisticated age-based targeting now allows for significant marketing efforts, and brands like Patron and Pernod Richard have increased digital marketing budgets by double-digit percentages since 2014.

Lifestyle Marketing is a Natural Fit for Liquor Brands

Johnnie Walker's social networking success results in large part from its focus on promoting a lifestyle, instead of simply its product. When you look at the images featured on Johnnie Walker's Instagram page, you see people engaged in active, fulfilling pursuits: sailing, racing sports cars, enjoying the outdoors. You also see heartwarming scenes of people engaged in projects with their fathers, conveying the sense that this brand is all about being active, joyful and connected.

David Lette, premium brands director at Heineken, states that "Last year we had our Heineken rugby studio, which enabled fans of rugby to tweet with rugby legends such as Will Carling and have a direct conversation with them." Heineken is at the cutting edge with its programs, and in 2014, it featured a real-time show for the second screen, airing its #ShareTheSofa program during the UEFA Champions League and engaging users in real-time conversations on social channels.M

As an alcohol brand representative, you hope to capture the attention of each new wave of consumers as they reach legal drinking age and begin to establish loyalty to certain brands. Increasingly, liquor manufacturers are turning to user-generated content on their social media platforms because younger users have much greater confidence in what their peers have to say than in claims made by advertising copy. This networking approach extends the reach of your brand and you can encourage virality by offering influencers a special premium reward or giveaway. Jim Beam launched a "Bold Choices" campaign on Facebook, inviting fans to post about the bold choices that they've made in their own lives. The campaign took off, and Fred Noe, a Jim Beam distiller whose family has been with the company for seven generations, promised to get a tattoo if the Facebook campaign achieved a million "Likes." The campaign surpassed its goal and he got his tattoo -- all chronicled on Facebook, of course.

Live Streaming Is the Latest Digital Strategy for Liquor Sales

Periscope, a live streaming app for mobile devices, allows anyone with a Twitter account to post real-time content. It also includes a live chat feature, enabling users to interact through text posted online. If your brand has an existing Twitter account, you have a built-in audience for anything you post on Periscope because it is visible to your Twitter followers. Patrón Tequila offers VR through Periscope, showing behind-the-scenes looks at events and how products are made. Other up-and-coming live stream apps include Snapchat, Meerkat, Facebook Live and an app from YouTube called "Connect," which will launch later in 2016. The Financial Times notes that many brands are eager to venture into this new sharing environment because it builds community and creates an air of authenticity. Customer experience is as important as the product that's being sold, and no customer experience with the brand can be fresher than the real-time conversation facilitated by live streaming.

Alcohol brands are also addressing the latest trend of enhancing physical experiences: Diageo launched an app to help users find nearby bars and liquor stores, provide drink recipes and integrate with Facebook to allow sharing and reviews. Amstel introduced a smart vending machine in Bulgaria that encouraged users to "Take a break." If the user stood in front of the vending machine for a certain length of time, the machine rewards the user with a beer. Furthermore, beverage companies are even taking their first tentative steps into the Internet of Things. Diageo's Technology Ventures is partnering with ThinFilm to put smart labels on Johnnie Walker Blue Label bottles. These labels send information and promotional offers to any shopper who scans the bottle with their smartphone. The labels maintain the real-time status of the bottle because they are always remotely connected. They can tell where the bottle is in the supply chain and whether it has been opened. Britain's Meantime Brewing Company has an augmented reality mobile app that provides responsive videos and tasting notes when a customer scans the beer bottle label with their smartphone. Beverage brands are beginning to offer personalized options, and liquor brands are following suit, including Johnnie Walker's customizable engraving.

Manufacturers are fine tuning their digital capabilities by using big data; Heineken USA spent $150 million last year on measured media. Responding to the push toward digital marketing, the company directed 20 percent of its marketing budget to digital in 2014 and increased that percentage to 30 percent in 2015. At the 2015 wholesale beer distributors' meeting, Heineken was the first major supplier that "focused much more heavily on digital marketing than TV/radio/outdoor," according to Beer Business Daily. The company also experimented with a multi-channel campaign to launch a new product, a global brand of tequila-flavored beer called "Desperados." In states where TV ads introduced the new beer, consumer awareness didn't really happen. However, in states where only digital was used, awareness was about 23 percent. This fit with their marketing expectations, since the target audience for Desperados is largely millennials. "That really tells you that if you want to reach out to millennials, you really need to use a media that is not necessarily TV," stated Heineken USA's Chief Marketing Officer, Nuno Teles. Teles has partnered with Datalogix to measure the effectiveness of each initiative in the digital marketing campaign.The entrance of liquor manufacturers into the digital space is anecdotal evidence that any brand in any industry can benefit from the access to customers that digital provides. TubeMogul statistics show that, among pre-roll video ads, those ads sponsored by wine brands have the greatest completion rate at 82 percent, and ads for spirits are completed at a rate of 74 percent. These percentages both outflank that of retail ads, which are completed 73 percent of the time. Savvy to the pull of video content, Heineken's "Open Your City" campaign in New York teamed up with musician James Murphy. He turned the beeping noises from subway turnstiles into music that users can listen to in a series of short videos offered to local audiences. Demographic segmentation can drill down into specific locations; "The basic goal for digital is that we want to scale local," states senior brand director Quinn Kilbury.Digital transformation is penetrating every industry, weaving a web of new connections and refining awareness of market segments. Now that the doors to social media have been opened wide for liquor manufacturers, your brand is able to share its identity in numerous fresh and powerful ways.