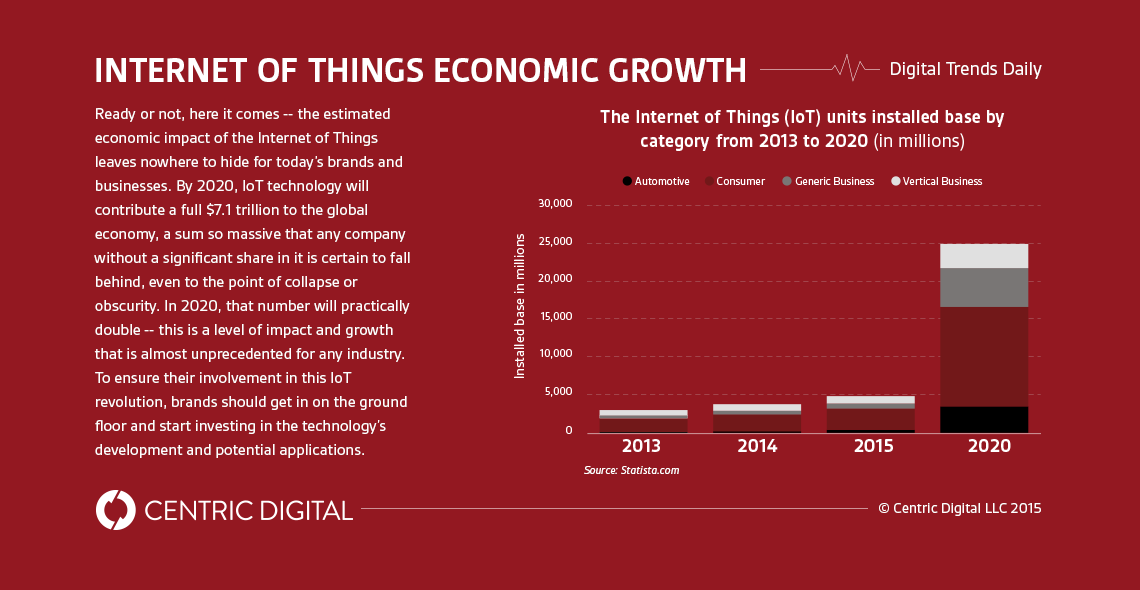 Brands and companies are quickly adapting their business models to acknowledge the potential inherent in the Internet of Things. Though it’s clear that the IoT can and will completely disrupt the business world, we’re only just finding out exactly the size and severity of this disruption.Deloitte University Press recently dropped a striking statistic estimating the total economic impact of the IoT over the course of the next few years and decades at $7.1 trillion by 2020 and $14 trillion to the global economy by 2022. Yes, they mean trillion.Take a minute to think about that. This number was thrown out by the International Data Corporation, otherwise known as the IDC, which also reported that the IoT market stood somewhere around $1.9 trillion in 2013, according to Forbes. If you do the math, this means almost a 400% market increase in just seven years’ time.Most industries don’t come anywhere close to that level of financial impact, even at their peak. If these estimates are even close to accurate, then there’s no doubt that businesses can, should, and must start paying more attention to the IoT and its potential.Just “paying attention” won’t necessarily cut it, though. The trick to capitalizing on its potential is doing just that — actually investing money in research and development is the critical first step that some companies are unwilling to take.The Deloitte study cited the Industrial Internet of Things as rapidly catching up to cloud services and big data in its potential to cause some “seismic IT shifts” — a possibility that depends entirely on the level of financial investment companies are willing to make. $14 trillion won’t come out of nowhere — companies need to invest now in order to reap the titanic economic benefits (I repeat—trillions of dollars) later.Any company that fails to jump on the Internet of Things train risks getting left in the dust by their more forward-thinking competitors, especially as it becomes one of the primary drivers of business progress. Now is the time to step on the gas--this is a level of impact and growth that is almost unprecedented for any industry. Those companies that act while the Internet of Things is still nascent will be the first to reap the rewards that come with a more connected and data-driven business.