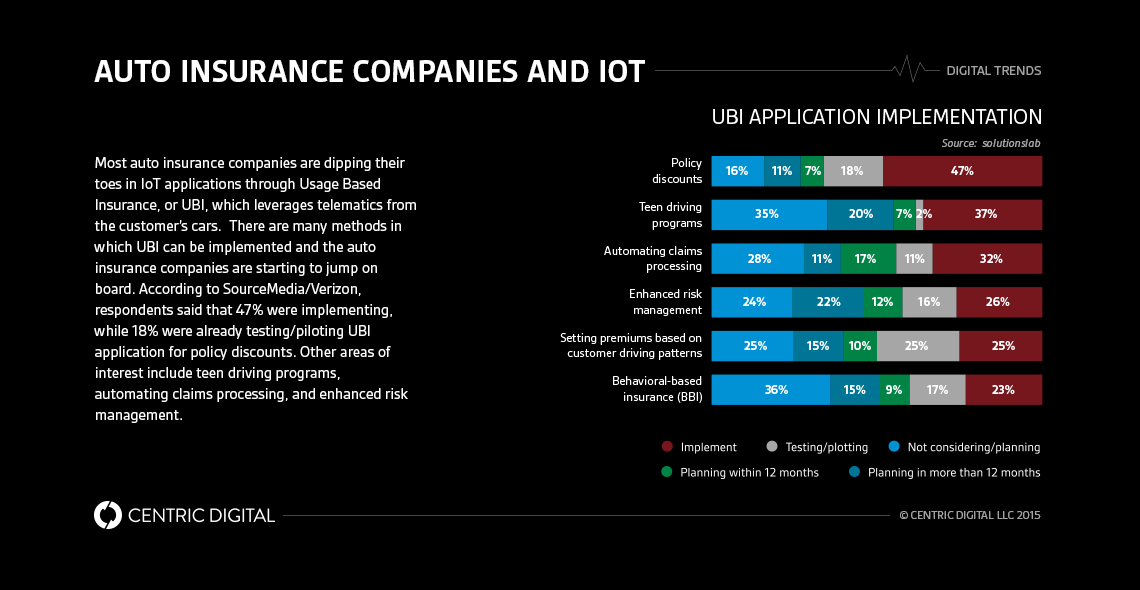 How will the internet of things applications in the insurance industry change the way we live and conduct business?It’s steadily becoming an undeniable fact that the Internet of Things, or IoT, plays an integral role in a great deal of what we do every day. From banking to education, the way we interact with the technical world is becoming increasingly integrated.In this installment, the focus will center mainly on how IoT applications are helping to shape the contemporary insurance industry and how much of a contribution IoT has made to its overall digital transformation.

Currently, most insurers still work under traditional practices that are far more reactive than proactive. This keeps many insurers from helping to prevent a great deal of incidents from happening, costing customers and companies money.The proliferation of both big data visualization and the industrial IoT has given new life to an industry that often feels one step behind. Now, there’s more opportunity than ever to cut unnecessary costs, streamline business processes and effectively assess the risk levels of clients. And it all starts with retooling digital strategy and increasing investment in IoT technology.

A key advantage that comes with incorporating the IoT into how insurers handle everything from policy implementations to the claims process is the idea of “connected coverage.” Retrofitting household items with an Internet connection encourages consumers to take risk management into their own hands, saving insurers time, resources and money.For example, household IoT devices, such as Nest and Amazon Echo, take the guesswork out of everyday upkeep. Through functions such as regulating indoor conditions and maintaining security systems, these IoT devices would bolster preventative measures, reducing the risk of significant financial issues.To take it a step further, if home infrastructure elements, such as pipes and electrical systems, were combined with IoT technology, one could monitor the health of these systems from a smartphone or tablet to find out ahead of time if and when certain components need to be replaced, before it’s too late.

The future implications of advanced IoT technology extend far beyond the home. For instance, there are already select auto and health insurers that offer usage-based insurance policies.These IoT-based policies can effectively track the way users live their everyday lives and offer discounts and rewards for safe behavior and positive habits. For example, a detachable dongle can be connected to a vehicle to keep track of data such as average speeds in relation to location or any fender benders that may occur that drivers may choose not to report.This data can then be transmitted to an insurer, who can assess or audit the driver’s current policy to reflect any changes reported by the dongle or other IoT-enabled device.For health insurance providers, this technology could be implemented in the form of wearables, much like those available from Jawbone or Fitbit. An advanced wearable could track the number of steps a person takes each day or the last time someone smoked a cigarette or had an alcoholic drink. This information would be transmitted back to the insurer, who could then adjust premiums to reflect the customer’s lifestyle choices.IoT technology could even bring both an auto and health insurer together by alerting drivers if they try, for example, to operate a vehicle while over the legal alcohol consumption limit. An in-car alert system, automatic shutdown mechanism or device for contacting local authorities could be implemented to reduce the risk of serious injury or death to the driver and others — all with the help of IoT.

The Future of IoT

In the next decade or so, there will be a major shift in the ways that organizations, particularly insurers, implement IoT in everyday business practices. Already, many people are subscribing to usage-based insurance plans. By the end of 2015, 17 million people had signed up for such plans, and that number is expected to exceed 50 million by 2020.In July 2015, it was reported that the addition of safety systems, such as Progressive’s Snapshot, contributed to a decrease in everything from unsafe speeds and rollovers to rear-end collisions and improper lane changes.For homeowners, insurance companies could install devices in homes that would warn people about impending natural disasters with enough time to prepare accordingly. Analytics from collected data could also be used to keep up with weather patterns, allowing insurers to adjust coverage and premiums while helping to reduce potential damages.Property damage assessments could also be conducted by drones that could collect overhead views of affected areas, ascertaining a much more accurate idea of damages. This could eventually eliminate the need for human employees, dramatically reducing response times.In addition, insurers can expect to see an increase in workflow efficiency, lowered premiums and more preemptive services that will eliminate disasters well before they have a chance to occur.The effect that IoT technology has had on today’s business and consumer infrastructures is a strong indicator of things to come. With the development of new and inventive ways to incorporate IoT into the products and services we use every day, insurance companies will undoubtedly see a change in how they approach digital strategy in conjunction with the implementation of IoT applications.