How Sephora Is Revealing the Future of Augmented Reality in Fashion 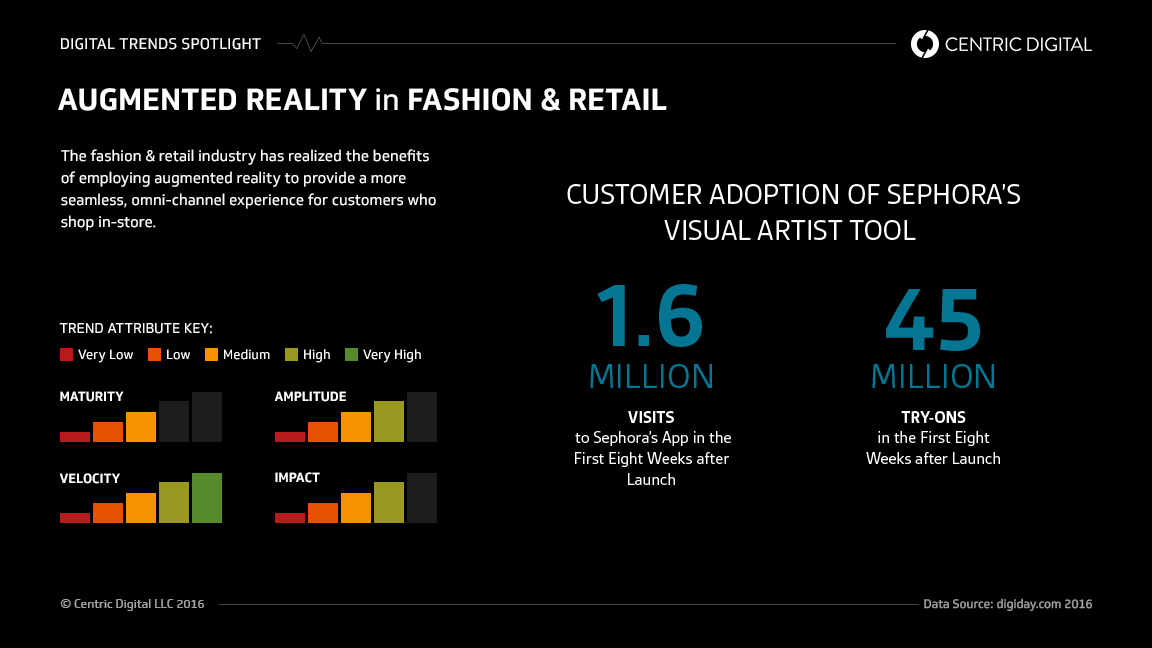 Fashion's experience-based nature makes it the perfect candidate for augmented reality, clothing and accessory brands are expected to far surpass other retail sectors in AR adoption during coming months.Although virtual reality has stolen many headlines this year, augmented reality (AR) and its unobtrusive informational overlay actually has greater potential to dominate industries moving forward. Most notably in the fashion arena, AR is stepping forward to provide a crucial experiential link to boost both e-commerce and in-person shopping. Here's an introduction to the extraordinary range of possibilities that AR opens up for your fashion and retail marketing strategies.

Because virtual reality (VR) has such an immersive sci-fi quality to it, the retailers who introduce it into the customer experience receive a lot of free publicity. Lowe's holoroom, for example, allows shoppers to put on an Oculus Rift headset and "walk through" their kitchen and bathroom remodel ideas. This technology is only available in a handful of the chain's stores due to expense and logistical demands, and at this point it may be more useful in making a brand statement than in actually driving in-store sales.Augmented reality is less splashy than virtual reality, but it's quiet implementation is adding significant functionality to the way online shoppers experience new products. AR uses a camera to identify a visual trigger in the user's surroundings. The user sees a live video feed of the real world on the screen of their mobile device, with an overlay of some type of software-generated content. This experience has a peculiarly compelling aspect, as the millions of enthusiastic Pokemon Go players can attest. Pokemon Go is a perfect example of AR, offering wish fulfillment for everyone who ever harbored a childhood longing to step into the TV set and meet their favorite cartoon character. Pokemon Go players view their actual real-time surroundings on the screen of their mobile device. Overlaid on that video window are the Pokemon characters triggered by the device's geographic location. Players can snap "photos" of themselves with these AR characters, as the AR app seamlessly merges the real world and the animated one.

From Zombies to Glamour

Though not a particularly new technology, AR generates a consumer appetite that extends far beyond Pokemon Go. Media sensation Snapchat has been exploring AR since it acquired the selfie filter company Looksery last September. That amusing little selfie filter, now entitled "Lenses," has led directly to the use of AR by the fashion industry. The same AR function that lets you add zombie teeth or spooky ghost eyes to your own face on a Snapchat video is incredibly useful to a shopper who wonders how a certain shade of lipstick will look on her face.Earlier this year, Sephora launched Virtual Artist, a standalone mobile app that allows customers to virtually test and then purchase cosmetic items from their smartphone. Using the front-facing camera on their mobile device, the shopper can "try on" lipstick shades or eyelash treatments as if looking into a magic mirror. The app is sophisticated in its ability to keep these highly realistic video layers right where they belong, as the person moves around in front of the camera. When shoppers see a reflection of themselves that they like, the "add to basket" button is conveniently located right on the same screen. In the first eight weeks since it launched, Sephora's Virtual Artist has seen 45 million "try ons." With numbers like these, even luxury brands are paying attention: Burberry's brick-and-mortar Beauty Box outlets are currently exploring the creation of cosmetics AR experiences.

AR Is Uniquely Well-Suited to Showcase Your Fashion Brand

The AR experience doesn't begin and end with faces, however. Your customer's whole body can be graphically overlaid with clothing options of every kind. As a matter of fact, AR has barely tapped potential to overcome the largest obstacle standing in the way of remote fashion purchases: the shopper's need to know how a garment will look on them, personally.Because fashion's experience-based nature makes it the perfect candidate for AR, clothing and accessory brands are expected to far surpass other retail sectors in AR adoption during coming months. In a September 2014 survey of U.S. internet users, 22 percent foresaw sampling fashion products (clothes, jewelry, nail polish, shoes, etc.) as the single most promising use for AR.

Due to the fact that AR can operate untethered and doesn't require any special equipment beyond a smartphone, it's on track to become commonplace in daily life. Unlike virtual reality, which removes its users from their surrounding physical environments, augmented reality can be presented in a way that's continuous with existing advertising.

Augmented reality will become a crucial component in the omnichannel experiences that will drive retail brands into the future. Improvements in the connection between the physical and digital worlds, such as advanced RFID sensors and improved tracking precision, will allow AR to seamlessly integrate into the physical world and the Internet of Things.

Augmented reality in fashion will become such an obvious experiential tool that it will facilitate a new explosion of online shopping. At present, some online clothing retailers, such as StitchFix, are experimenting with streamlining the trying-on process by providing customers with returnable shipments of clothing. While this business model has its virtues, it's likely that AR methods of digitally "trying on" clothing will win over some of the customers who simply don't like going into the dressing rooms in retail stores.Consumers who have the opportunity to try out clothes instantly, without having to wait for a parcel to arrive in the mail, will likely purchase more frequently and return fewer items. Furthermore, the experience of digitally trying on items has a certain high-tech delight associated with it because it's still a novel technology. Customers who clothe themselves in virtual outfits will enjoy sharing their new look with their friends on social media. Actually, the digital "trying on" experience, combined with the ability to save and share the resulting image, will amount to an entirely new category of fashion ownership. A certain look may go viral as various online groups of friends try it out and post photos of themselves "wearing" their new garments. Millennial customers who are familiar with expressing themselves through game platform avatars will feel at home with the game-like experience of trying out different virtual outfits.

As AR transforms your customer's shopping experience, your business will also see an array of benefits from this promising new technology. First, revenue will increase because customers will be likelier to want to order an item of clothing after they've seen how it looks on them. Furthermore, you're likely to have fewer returns because your mail-order customers won't have as many big surprises when they put on the product they've purchased.It's also worth noting that since the AR marketing experience is all digital, it's KPIs can be very closely tracked. This will enable you to measure the precise impact of your campaign and continue to hone the effectiveness of your visual merchandising decisions. Fashion brands that offer an AR experience, especially during the current early phases of the technology, will benefit from positioning their brand at the leading edge of the ongoing tech revolution.

Sephora's Virtual Artist Is Only the Beginning

The future of the AR consumer experience is bright for fashion brands, and it will be interesting to watch the creative innovations roll out from every direction. In 2013, designer Marga Weimans released the first ever augmented reality dress at Amsterdam Fashion Week. Her "hyperfabric," created in conjunction with AR experts Luciano Pinna and Sander Veenhof of AugmentNL.com, is part art project, part real clothing, and blurs the boundary between real and not real. Weimans opened the door for fashion designers to think in terms of garments that can be modified or "updated" from a distance, or even digitally changed according to the season.On the more playful side, AR t-shirts are being developed by several merchants to provide interactive 3D experiences when they encounter a mobile device with the appropriate app. Marks & Spencer has a line of AR shirts for children with animals that come to life and interact with the wearer on screen. Virtuali-Tee has developed a shirt that shows a generic set of internal organs that pulse realistically when a mobile screen is aimed at the t-shirt's coded pattern. Mobile jewelry shop, “Shop 4 Rings” offers an iOS experience that scans your hand and then lets you select which finger you'd like to see wearing a virtual ring. The "buy now" button is, of course, within easy clicking range of this visual experience.

Your Fashion Brand's Future Will Rely on AR

As AR hardware becomes increasingly essential to consumers, technology companies will turn to fashion labels to determine how to make their newest glasses, lenses or other devices most compelling as everyday accessories. TechCrunch predicts that VR and AR together, filling different needs, will disrupt mobile with a $150 billion market by 2020. They see AR accounting for $120 billion of this amount because of its greater commercial versatility, with VR claiming the other $30 billion for mostly game-related purposes. Author Tim Merel, managing director of Digi-Capital, points out that this early phase of these technologies "feels a bit like the smartphone market before the iPhone." It's time to start imagining the amazing new places that AR can take your fashion marketing.