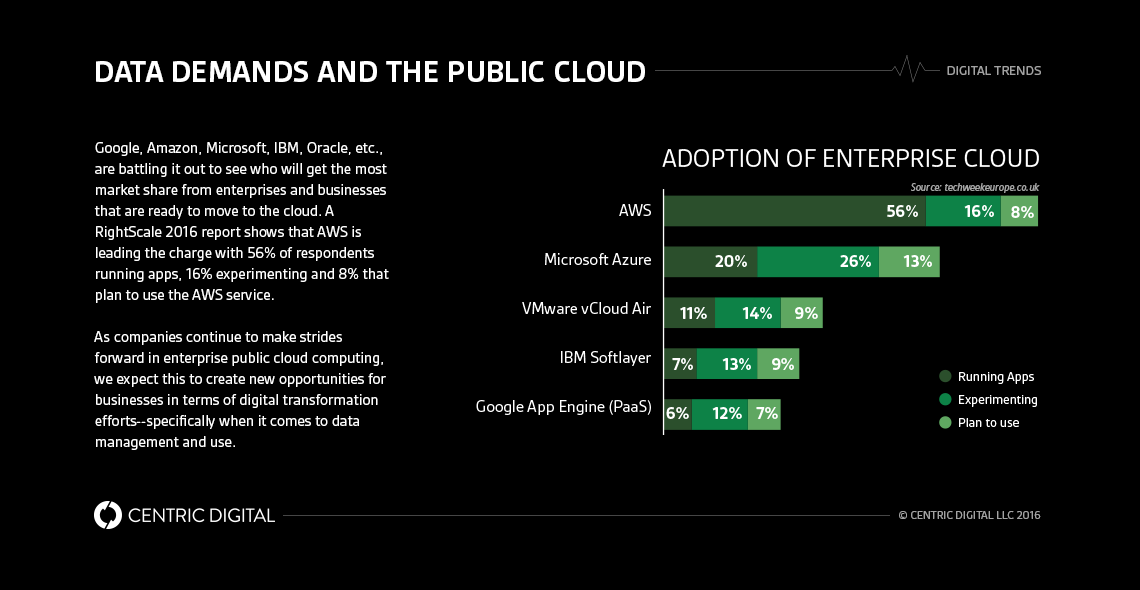 What does enterprise digital transformation look like through GE’s adoption of Amazon Web Services? Multi-national conglomerate General Electric (GE) has its fingerprints in virtually every industry and sector that comes to mind. On a daily basis, nearly every American comes in contact with something GE has created, manufactured, or produced.Considering the company’s size, it has been surprisingly agile and capable of adapting to new technologies and innovations since its creation in 1892. A number of recent initiatives, including its microfactory and Open Innovation effort, were said to be created to help drive traditional, technological, and digital innovation. To further its digital progress, the company even created a media-centered site to report on its advancements, and invests in startups focused on developing software, healthcare, energy, and advanced manufacturing.One business unit in particular, GE Oil & Gas, is working to ensure that their enterprise digital transformation progress moves forward in the oil and gas industry. This is an industry that has been constantly facing a multitude of challenges from competition to legislation, and cost. By leveraging GE’s surprisingly agile approach to this sector of its business, the company understands that digital innovation and digital transformation are essential to success here as well. One particular effort that is making big strides forward is that GE Oil & Gas is moving to cloud computing.This move will enable the company to access and use internet-based computing resources as needed, versus having to invest in data centers, servers, and other architecture.In order for GE to adapt GE Oil & Gas to this environment, this effort needed to hold real innovation and business promise. But to make such a move with 45,000 employees across 11 different regions, seven research centers, and the 85% of the world’s oil rigs that use GE Oil & Gas drilling systems, was quite an undertaking to say the least. No less, the company was committed to digital transformation and began the effort in late 2013.

Moving To The Cloud

GE Oil & Gas began with the right first steps towards its cloud integration—it set clear, defined goals and objectives to drive the effort. These goals included the need to:

The company then looked to third-party cloud service providers to support its digital initiatives and goals. The company selected Amazon Web Services (AWS) to facilitate its cloud migration project. AWS is the same cloud infrastructure used by companies like Netflix and AirBnB, among thousands of others.Currently, GE Oil & Gas has close to 900 apps in use, and its parent company GE has about 9,000 apps in use. Many of the apps, albeit infrequently used and low in number of users, are vital to the business as a whole. It set its sights on getting 500 apps into AWS, which the company believes could help drive significant success for the company.

Next, GE Oil & Gas focused on ramping up and training its teams to ensure optimal use of AWS. The business unit sent 50 employees to Seattle, Washington for training in AWS technologies. This not only enabled the entire team to use AWS, but also unified the general understanding of the company’s plans and goals. This didn’t only empower GE Oil & Gas to keep its technical IP in-house. The company knew that this component of its effort would help it secure future success and acceleration of cloud adoption.GE Oil & Gas also built a range of foundational services on AWS during this time. This included monitoring, backup, DNS, SSO automation, and other operational infrastructure to further help speed its cloud effort.

GE Oil & Gas understood the benefits of digitally transforming its business with cloud computing, and reported seeing positive outcomes early in the process. During the first stages of its cloud adoption, it found that by using AWS, it could build things at a much faster pace than it could ever do so internally. This is often consistently seen in use of cloud infrastructure. But the benefits did not stop there. The company also saw 52% cost reduction and significant increase in productivity. There was a 98% reduction in outages and incidents that could cause impact to business, and many other gains. According to publicly shared information, the $14.2 million-dollar investment the company made in moving GE Oil & Gas to the cloud has resulted in $14 million savings.For example, currently in operation is a customer billing application that consolidates the number of invoices per customer to one. The company also created a means for GE Oil & Gas to conduct analysis for pipeline inefficiencies, and a “bot army” that not just monitored business processes, but helped identify workloads within its database systems and applications to determine usage and cut back on resources to accommodate drops and spikes. While GE Oil & Gas cites that its great talent and teams play a key factor in its successful operations, its adoption of cloud computing has helped the company in multiple ways – with dynamic outcome in multiple areas of its business development, operations, and processes.The move from legacy and traditional IT operations to agile, operationally efficient options like cloud computing was certainly an undertaking for the company, but it also created a more flexible, cost-efficient, and streamlined means for GE Oil & Gas to innovate across all aspects of its business. The question GE Oil & Gas will be asking itself is how they can use the AWS initiative to become even more productive, more effective, and better positioned for the future.