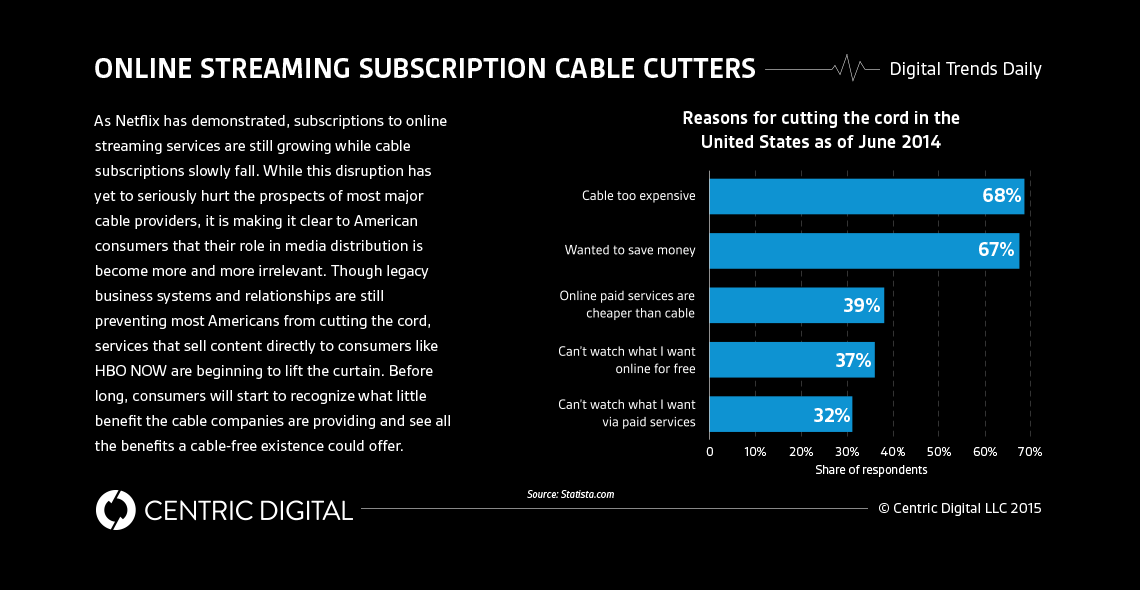 For years, traditional cable providers have managed to keep afloat as digital media distribution threatens its business model. First came Netflix, which disrupted and eventually destroyed the video rental industry before cutting into cable viewership. What’s worse, Netflix offered a free alternative to cable’s on-demand options, along with a greater variety of titles and options.Then, iTunes started offering purchases and eventually rentals of almost any movie or TV show for a reasonable price, letting customers view them on their iPods, iPhones, and iPads from anywhere. And once Apple jumped in, Google, Amazon, and the others had no choice but to follow suit.

All Hats in the Ring

Today, almost all these services (with the notable exception of iTunes) have tried their hand at creating original content, with Netflix creating sensations like “House of Cards” while Amazon quietly produces critically-acclaimed, but still not-quite-mainstream hits like “Transparent.”The recent release of HBO NOW, the premium channel’s mobile-only digital distribution service, feels a lot like the first few taps on the final nail in cable’s coffin. As a younger consumer base continues to move away from traditional television and towards mobile media, according to the New York Times, many wonder how businesses as entrenched as cable companies could possibly hope to keep up.But in the face of HBO NOW’s recent success (as BGR reports, the app has surprisingly become a favorite on iPhones and iPads, despite the small screens), cable companies don’t seem too worried. In fact, many of the major providers seem more focused on controlling the home automation market, according to CEPro, a move that is itself a disruption of the home security systems offered by companies like ADT.

Why Cable Shouldn’t Be Confident

While some say providers have good reason to be optimistic, as Fool emphasizes, it’s getting more and more obvious that they are no longer an essential part of media distribution. HBO NOW could offer a view into the future, one in which content providers like cable networks sell content directly to the end consumer.Everybody knows we live in a world in which anyone can create a website, use it to broadcast content, and even reap the benefits of a direct, measurable relationship with viewers — the question is, is it no longer a world in which all these middle men are needed?Networks like Comedy Central and AMC have been creating original content for years, and are now successfully making that programming available through their own apps — provided, of course, that users enter information that proves they subscribe to a cable provider.But Netflix and iTunes have long made it clear that we don’t need these companies to access content. The product of legacy business structures, it is this requirement of a cable subscriber’s login that prevents the networks from selling directly to customers and will perhaps ultimately render them irrelevant.Americans have been known for relationships with cable providers that are shaky at best, according to QZ, so it’s not hard to imagine a few more technological steps forward that will remove them from the content equation entirely. High-speed internet options that don’t involve cable aren’t far from sight (Google Fiber seems to be well on its way, as Time reports), and once they’re in view, they might overshadow our cable boxes entirely.