Should Credit Card Companies Be Scared of Apple Pay and Google Wallet? 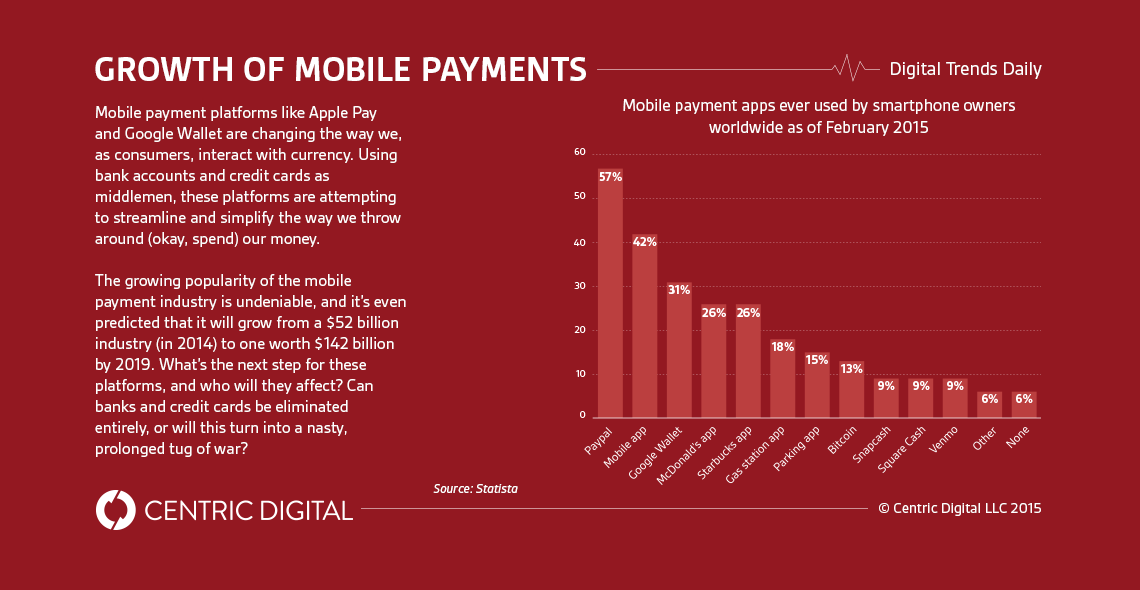 They’re calling 2015 the “year of mobile payments,” and for good reason. Whether it’s Apple Pay, Google Wallet, or the newly-launched Samsung Pay, these platforms are quickly gaining traction as the most efficient way to pool and distribute money. What’s the next, potentially disruptive step, and who — if anyone — are these platforms threatening?Although our smartphones (and now our watches!) increasingly dominate all aspects of our daily lives, the sphere of mobile payments is undergoing an especially dramatic evolution — a coming-of-age of sorts for an industry that’s still rapidly maturing.Specifically, Apple Pay and Google Wallet now find themselves in a tug-of-war over the mobile payment market. With other players slowly but steadily entering the ring, I have to ask: what’s next? And in doing so, I can’t help but wonder if traditional banks and credit card companies are on their way towards obsolescence.No matter which way you spin it, the industry’s future is bright — Forrester predicts that mobile payments will grow from a $52 billion business in 2014 to a $142 billion one in 2019. Other countries, it seems, are on an even quicker trajectory than the U.S. — in places like India, where a large percentage of the population doesn’t even use credit cards, mobile payments are quickly becoming indispensable.

Let’s take a look at the contenders. Apple Pay was launched in September, and has quickly established itself by building partnerships with powerhouse brands — not only is it now built into both iPhones and Apple Watches, but Apple has also significantly increased the number of banks and credit unions that it supports. This was an unparalleled debut for a mobile payment platform, and experts are predicting that 2015 will, in fact, be “the year of Apple Pay.”On the other side of the rope stands a sturdy and threatening Google Wallet, which has been around for much longer but hasn’t really “taken off” for whatever reason. Recently, Wallet has been turning its gears, signing with several new mobile providers to make sure it’s pre-installed on smartphones, and also making attempts to partner with a number of powerhouse retailers, like Dunkin’ Donuts.And then there’s the soon-to-be released Samsung Pay, which will allow users to pay directly from their Visa or Mastercard accounts, but using their phones instead of an actual card. Because the platform will work with both traditional card readers and the new contactless ones, it’ll likely gain more widespread acceptance amongst retailers than Apple Pay and Google Wallet -- at least at first. Also in the mix are the loyalty-driven payment platforms, like Starbucks’ colossally successful one that rewards customers with perks and points for continued usage.

Who’s Getting Disrupted Next?

Although the future trajectory of the mobile payment space hasn’t come into focus yet, there’s no doubt that the industry is gaining traction and bound for even bigger success. Right now, either a credit card or a bank account is required to sign up for one of these platforms, but is it possible that these, too, will get cut out of the process? Credit cards still come with their fair share of hassles, like late fees, credit card minimums, and faulty rewards programs — which begs the question: why not switch over completely to mobile payments? Such a transition would be far more complicated than it sounds, but that doesn’t mean it’s unlikely down the road.The important question to ask is who would be seriously affected by an even more serious dive into mobile payments. Credit card companies are at the top of that list, as they currently act as the critical middlemen between banks and platforms. But could Apple and Google decide to cut out this middleman entirely? Given the sheer might of both companies, it would be foolish to write the possibility off entirely.What’s not clear, at the moment, is who or what will be disrupted next by these mobile payment platforms’ rapid growth. At the moment, each platform is apparently hovering over its own territory, pulling at strings to gain its own set of partnerships and instill deep loyalty in a broad base of consumers.Will products like Google Wallet and Apple Pay set off the demise of traditional banks and credit card companies, or are they just temporarily complicating the payment process? Can and should both options exist, or will one eventually make the other obsolete? I’m excited to see what happens next.