What Other Companies Can Learn From Dun & Bradstreet’s Digital Transformation 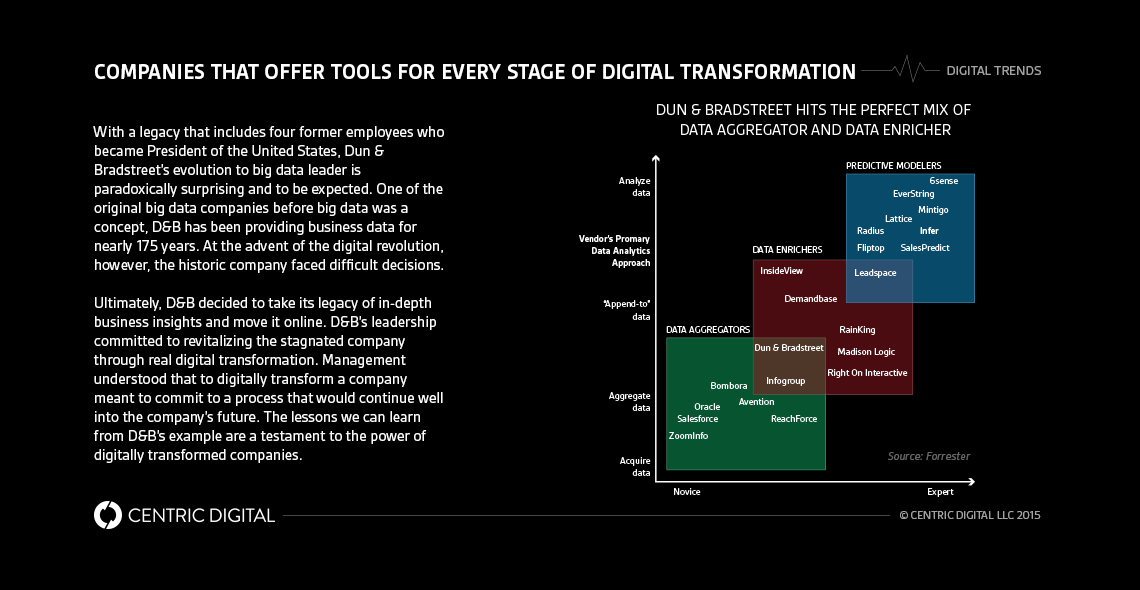 Real digital transformation is not a terminable program or finite project, it’s an ongoing process of reinvention that companies must commit to for many years. Dun & Bradstreet, the 175-year old provider of business information, began the successful process of digital transformation a decade ago and it continues today, ensuring the company remains relevant for its customers far into the future.Founded in New York in 1841, Dun & Bradstreet is the original “big data” company. In those early days, the company’s “reporters,” including a young Abraham Lincoln and three other future US Presidents, collected business data door-to-door. Today, D&B’s massive database, with information on just about every business on earth, is used millions of times a day to make critical business decisions.By the mid-1990’s, however, D&B had grown into a slow-moving, underperforming holding company of unrelated businesses that included everything from ratings company AC Nielsen, to bond-rating agency Moody’s, and even a young technology outsourcing company called Cognizant. To transform the company, management split the company into smaller, nimbler parts that could be closer and more responsive to customers.I joined D&B in 2003 shortly after the last of these divestitures and the arrival of a new management team on a mission to revitalize the core business of D&B. Over a decade later, D&B continues to successfully reinvent itself in an ongoing process of digital transformation that offers great lessons for other traditional businesses.

The first step in transforming D&B was articulating a clear strategy with digital as a core component. In the early 2000’s, it was already clear that information companies needed to become digital, but most of D&B’s products were still based on outdated legacy technology. As the new leader of the company’s core product line, I inherited a dizzying array of disconnected products and platforms that delivered D&B data via everything from fax machines to mainframes to dial-up modems.Rather than continue to evolve these legacy products, we made a clean break. We developed a strategy to move the business from printed reports and installed software to a dynamic, cloud-based, software-as-a-service platform that we called DNBi. This strategy allowed us to focus our previously fragmented product development investments on a single modern platform that was much more flexible, modular, and scalable for the future.Internally, this was considered a radical strategy. Customers, however, immediately saw the benefits of a new world-class user experience, unlimited subscription pricing, and a seamless upgrade path to new versions and features. In the course of a few years, we migrated most of D&B’s core business to this new platform, driving significant revenue growth and big improvements in customer satisfaction. While moving away from old products and pricing models can be hard, D&B was not afraid to disrupt itself with a bold digitally focused product strategy.

When new management came to D&B in the early 2000’s, they realized that in order to transform the business, they would first have to transform the culture. Like many traditional companies, D&B’s culture was too risk averse and slow moving to respond effectively to a market that was changing much faster than ever before. Delivering on the new digital strategy would require the company’s employees to break from familiar practices and embrace significant change in the culture of the organization.The first step in establishing a more modern culture was tearing down the traditional hierarchies and bureaucracy that had developed over many years. Titles were abolished, and everyone at every level in the company assumed the title of “Leader” of his or her area of responsibility. The title changes communicated a broader idea: that every employee was expected to act like a leader. They were expected to take ownership and think, not just take orders from “management.”The second step was defining what behaviors were expected in this new culture. D&B’s “Winning Culture” model defined Guiding Principles and Rules of Engagement for how employees should interact with each other day-to-day. These principles encouraged more open and honest communication, decisive action, and more “challenging up” than the old hierarchical D&B culture.Finally, D&B created a physical environment that supported the new culture. The old company headquarters, with its wood paneling and private offices, was sold, and the company moved to a new, modern, open floor plan office. Coupled with a rebranding effort that refreshed the company’s logo, colors, and brand standards, this new environment sent a powerful signal that this evolution into a new kind of company was real, permanent, and not just a passing fad.

While D&B’s original digital strategy was to become “an important presence on the web,” the first efforts were clumsy at best. The company migrated paper reports to web delivery and acquired Hoover’s, a digital native competitor. For a brief time, D&B even managed the business entity verification for SSL certificate provider Verisign.Over the years, however, this aspect of the strategy evolved, and D&B increasingly focused its attention on integrating into a wider and wider digital ecosystem. Rather than expecting every customer to come to D&B, even over the web, the company is bringing its capabilities to where customers are.One example of this is Data.com, a partnership with Salesforce.com. Data.com integrates D&B data with customer data deep inside Salesforce.com’s leading CRM platform and makes the combination accessible to Salesfore.com’s ecosystem of app developers.More recently, the company launched D&B Direct, an API layer that offers “data as a service” for others to much more easily integrate D&B data into their applications. It also created the D&B Data Exchange, a platform on which other business information providers can combine their data with D&B’s data and organize it around the D&B DUNS number.By opening up their data to both their customers and a world of third-party app developers and other data providers, D&B is building an ecosystem around itself -- tapping into the creative power of the market to drive innovation from the outside in and in ways that the company would have never imagined alone.

In the fifteen years since its digital transformation began, the enterprise value of Dun & Bradstreet has increased over fivefold. Today, a new generation of management is driving an updated strategy, under a newly refreshed brand, and an even more open, externally focused culture. The company is boldly embracing the cloud, social media, and its rightful place as one of the originators of the exploding world of “big data.”Not a project or even a multi-year program, real digital transformation, like what D&B has undertaken, is more of a “lifestyle” that companies must adopt if they are to stay relevant. The dynamic and powerful example of Dun & Bradstreet, a company that turns 175 years old next year, proves the leadership committed to change can create sustainability for an organization and significant value for shareholders and customers.