Wearables Will Know the Whole You 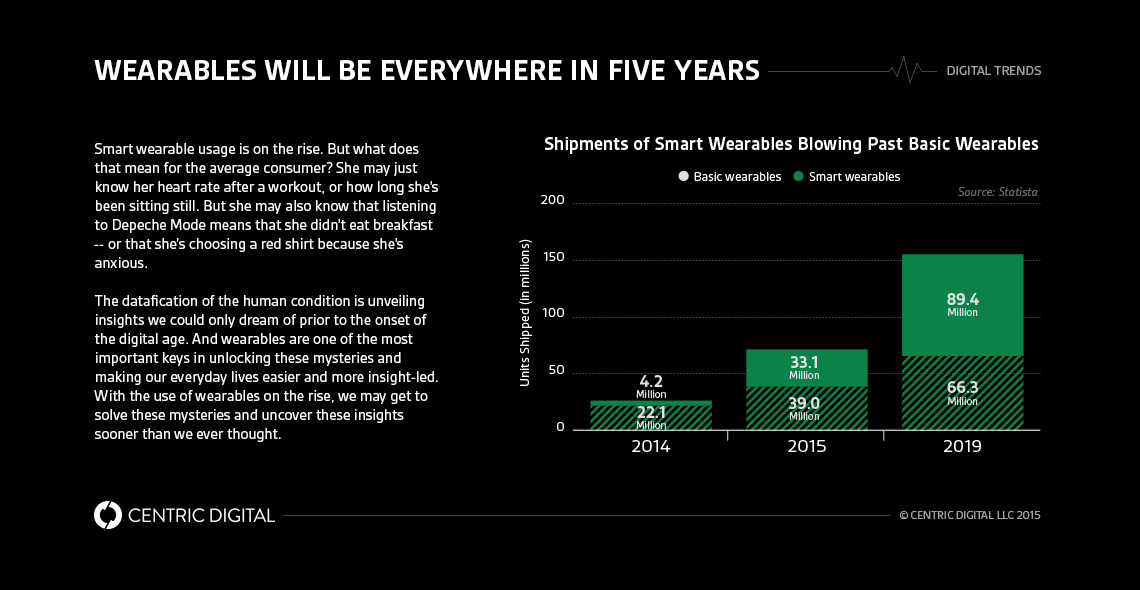 Do you feel that twinge in your shoulders as you slouch in your seat? That late night has caught up with you and your body is talking back. Or maybe you just got some great news and feel totally relaxed. Or skipping your breakfast this morning has really stymied your workflow. Wearables will soon tell you why.Right now, that dull throb at the top of your spine could come from any number of causes. In the near future, however, you’ll know exactly why you’re slumping -- and then, exactly how to get back in your groove.

Datafication, Wearables, and You

Amazon, Google, and literally every social media platform ever created have built their businesses on the backs of data. When you buy this, you might also like that. If you “like” this band, you’ll like that ad.For the most part, these companies require a user’s input to draw conclusions. But with wearables, data input is completely passive. A user doesn’t have to buy, “like,” or search for anything. A user just has to “be.”Put simply, datafication is using technology to quantify all aspects of life. Right now, it takes information like what kind of apps you use on your phone to determine how much risk you make in investments. In the future, with the production of wearables growing at an explosive rate, data scientists could be able to determine personality by posture, or what sitcoms you like by your favorite sock color. Given a future involving fabrics with changeable colors, these data-led conclusions are entirely within the realm of possibility.This is where the real magic of datafication happens: separating data from its originally intended usage. In 2009, Google accurately predicted a flu outbreak a flu outbreak in the Mid-Atlantic region of the U.S. by search histories of flu-like symptoms. Two weeks later, the CDC confirmed Google’s findings. But what if a flu outbreak could be determined based on when you wake up, your clothing choice, or what song you’re listening to?

Wearing Datafication on our Sleeves

It’s easy to imagine the impacts of wearables and datafication on public health. However, identifying trends is well within the realm of possibilities through greater datafication. Combining the frequency of music played in our smart earphones with our heart rate, data scientists could identify the next big artist or whether a certain sound (like the wub wub wub) will soon get white hot.Datafication has wide-reaching implications for nearly every industry. But this obviously comes with one drawback: how much will consumers want reported? Consumers have often gone to battle with Big Data before over the issue of privacy. In fact, after Google released their report on the flu outbreak, two privacy advocacy groups sent a letter to Chairman Eric Schmidt voicing their concerns.Whether wearables and datafication take off together to provide better insight on user behavior, or crash and burn because of consumer privacy remains to be seen. But with the boom in the number of units being shipped in the coming years, it’s clear some are interested in what their wearables can tell them through datafication.