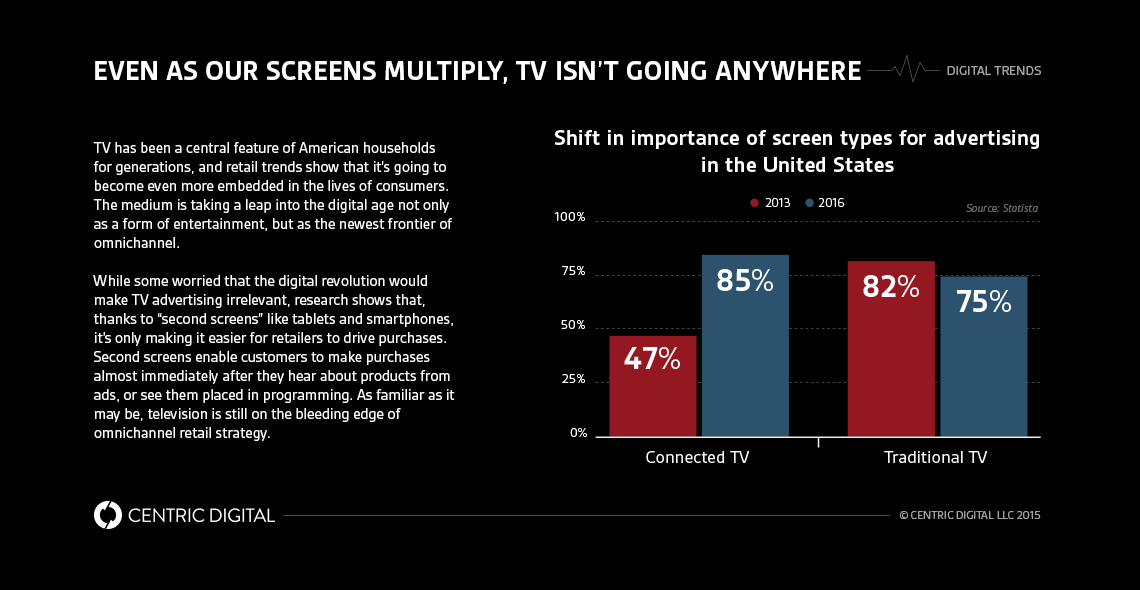 As digital complicates the retail market, businesses are striving to find new methods of consumer engagement. But as the latest trend in omnichannel proves, new approaches to engagement don’t always happen on new mediums.You could trace the beginnings of omnichannel retail to the late 19th century, when the first mail-in catalogues were created. For the first time, consumers could sit on their living room couch to browse items, then have it delivered to the comfort of their home. The most recent trend in e-commerce aims to provide that exact same service.Television has been a staple for retail and marketing executives for decades, providing a direct consumer link for advertising and home shopping. But retail leaders are realizing that TV could be combined with consumers’ many digital devices to provide a seamless, omnichannel shopping experience, and the strategy is already being met with success.

Thinking Inside the Box

TV is an obvious to way to create yet another touch-point for omnichannel engagement. Much of retailers’ excitement about this new strategy stems from Apple’s recent overhaul of Apple TV, the service used to provide a single home for cordless television and movies (Netflix, Hulu, iTunes, digital versions of owned entertainment, etc.). The new tvOS will feature a multidimensional suite of apps that are ideally suited to e-commerce needs. For retail’s fastest thinkers and implementers, this is a chance to quickly capitalize on a crossover iOS audience.Retailers with omnichannel offerings like Gilt have already announced big plans to translate their successes in digital to the television set. 80% of its purchases have come from iOS-enabled devices, and they hope that this strong momentum will carry over to a tvOS-enabled audience making purchases from the couch.It’s a strategy that’s likely to work. QVC, one of the innovators in the “couch-as-a-retail-touchpoint” movement, has demonstrated how effective omnichannel strategies are: 47% of the company’s revenue in Q2 of 2014 is attributed to web and mobile. TV provides an enormous and captive audience, and it may act as a golden ticket for powerful e-commerce retailers seeking to expand their market.

But of course, TV never really went away -- despite the power of digital engagement, 67% of internet users are still interested in TV shopping, according to Statista research. And over the past five years, the effectiveness of TV advertising waned by only a meager 1.5%. It’s a medium that has had a place in American culture for the past 60 years, and while other devices and platforms have come and gone, TV’s shelf life has no end in sight.But adapting digital strategies to traditional mainstays is less intuitive than it may seem. Apple’s developers have eliminated the ability to view web pages directly, meaning that all Apple TV content must flow through native tvOS development. This means that brands still need bold, innovative strategy and complete digital transformation to deliver the e-commerce, omnichannel experiences that consumers have come to expect.