1 Billion-Plus Smart Meters to Be Installed Globally by 2022 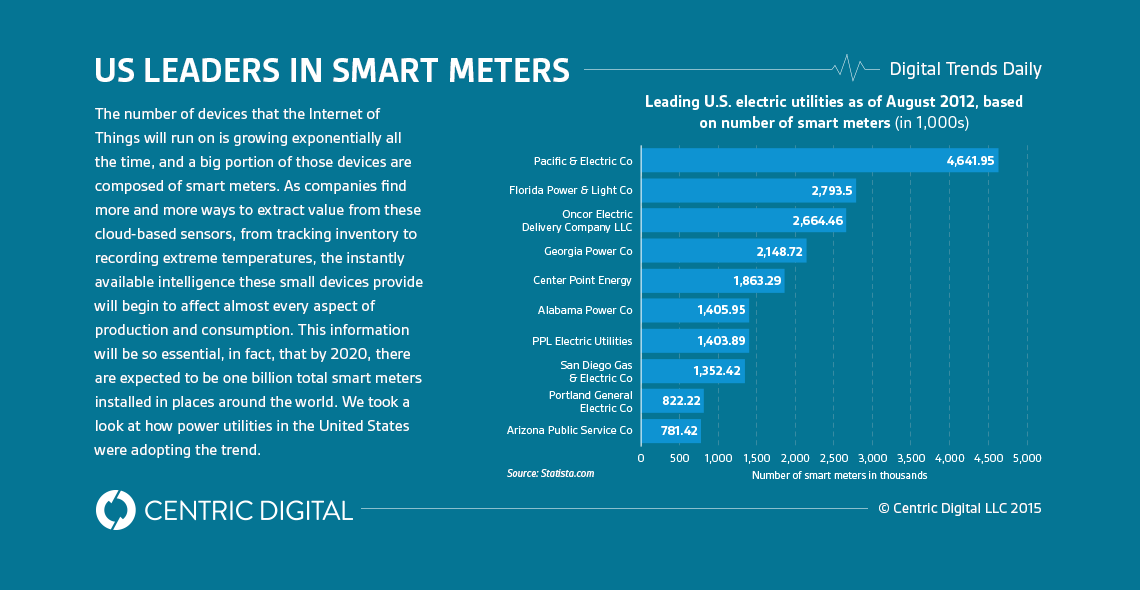 The Internet of Things is arguably the fastest growing worldwide market, with massive innovations and expansions unfolding around the clock. And we’re primed to see the biggest growth of all in the domain of smart meters.Companies of all sizes and specialties are doing what they can to keep up with this growth, and the focus is continually shifting towards developing technologies that encourage integration between objects and the data they can collect, store, and measure.A critical example of this kind of innovation is the smart electric meter market, which, having now leveled off in the United States after an exhaustion of federal funding, has begun its rapid spread into Europe and Asia.

How Smart Meters Got So Popular

Why exactly is smart meter technology such a hot market? Firstly, it makes it far easier for customers to keep tabs on their energy consumption.More importantly, though, it allows companies to quickly and transparently amass a colossal amount of data on this consumption, and alter or improve their business models accordingly. Both sides, in this case, win, in a seamless example of the undeniable benefits of IoT innovation.A report from Navigant Research observes that Spain, France, and the UK have all initiated hefty projects that will likely account for an estimated 93 million new meters by the end of 2020, with even more projects being deployed alongside these in Eastern Europe.Further across the hemisphere, China has launched a five year plan to upgrade their smart meter program, and another batch of projects have been planned by Japan’s mammoth Tokyo Electric Power Company that will account for some 80 million new smart meters. In India, early-stage ventures are underway that will prepare the country for later, larger deployments, which are ultimately expected to add up to more than 150 million meters.If you do the math, that’s nearly 323 million new devices in just 6 countries. According to Navigant, the revenue of these projects combined will approach $6.6 billion in 2023 — a sizable increase from 2013’s estimated $4.4 billion. These are no small numbers; in fact, they’re huge! The sector’s expansion — nay, explosion — is imminent.

What Happens When the Meters Start Running?

So what exactly will a world with smart meters look like? Firstly, these new installations will bring with them a huge influx of data on energy consumption, waste, and spending — on the consumer side, as well as from each and every electric provider.This data will likely be available publicly online, which will undoubtedly bring up some serious questions about security and privacy — who should be allowed to see all of this new information? How will it be regulated?Navigant’s report is a useful preliminary dive into the important questions that are bound to be asked about the future implications of IoT technology.Their study focuses on major potential technology issues, market drivers and barriers, as well as meter installation and revenue metrics, all divided by region, meter type, and technology type. With big innovations come even bigger questions — the Internet of Things and its associated technologies are no exception.