Should Traditional Businesses in Digital Trouble Look to CDOs for Help? 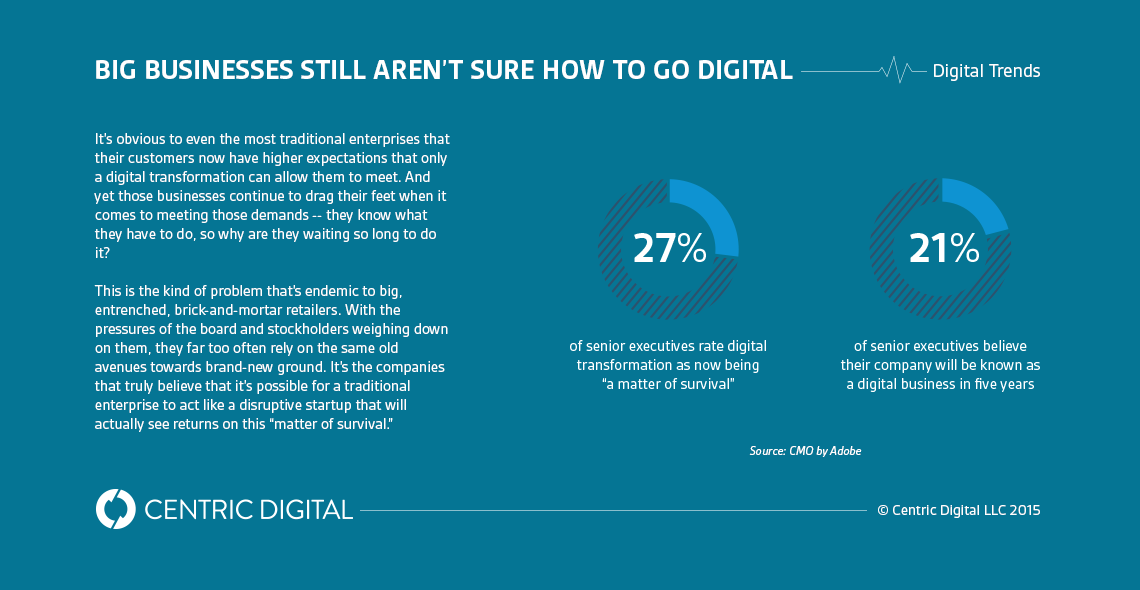 As part of a major reorganization process, Barnes & Noble recently hired former Toys ‘R’ Us Chief Digital Officer Fred Argir to head its digital operations. It’s the latest chapter in the retailer’s almost two-decade struggle to transform itself in the face of massive digital disruption.Earlier this year, Barnes & Noble announced it was reorganizing again — splitting into two separate companies in the hopes that its two main divisions, retail and education, will each grow more quickly and efficiently when made independent of one another.It also recently announced that it hired a Chief Digital Officer in Fred Argir, who joins having held the same position at another struggling traditional retailer, Toys ‘R’ Us.As someone who worked at Barnes & Noble when eCommerce first began to disrupt the retail market, I was really interested to hear that the company had hired a CDO. It’s a typical move for a traditional company, but that’s what makes it so disappointing.If you remember how aggressive and forward-thinking this company has been about digital in the past, the decision to bring on a CDO from another traditional retailer feels like a step backwards.

The Nook’s Niche in Silicon Valley

I worked at Barnes & Noble in the late 1990’s, helping the company launch its eCommerce business. At that time, consumers were just trying out online shopping for the first time, and a little company called Amazon.com had recently completed a successful IPO.Facing strong competition from Amazon in its core book business, Barnes & Noble became one of the first traditional “bricks and mortar” retailers to make a serious effort in eCommerce, and actually took a number of bold and decisive steps in the following years to transform itself around digital.It set up its eCommerce business as an entirely separate company, and furnished it with an expansive open office in the massive Manhattan building that Google now calls home.It hired aggressively from the outside, attracting people like myself and Centric Digital’s Chief Digital Officer Brian Manning, who would not otherwise have worked for a traditional retailer. It even took the online business public on the NASDAQ, raising outside capital in a market hungry for everything “dot-com.”But when the dot-com bubble burst, Barnes & Noble quickly merged the online business back into the parent company and pivoted to a less aggressive posture on digital.Over a decade later, when Barnes & Noble began developing its own eBook offering, the Nook, it again set up a separate company, this time in Silicon Valley. That kind of bold, risk-taking behavior showed another side of this “traditional” enterprise.But overall, the company’s tendency has been to take steps in innovative directions, only to change course when the returns don’t match the investment.When Amazon’s Kindle started badly outselling the Nook, Barnes & Noble pushed the eBook’s development team back under the umbrella company’s full supervision, retreating from the sort of logic that governs disruptive tech startups.The ongoing reorganization and changes in leadership are typical of the struggle of traditional businesses have to dynamically respond to digital disruption. But one has to wonder what Barnes & Noble could achieve if it truly rededicated itself to the startup-like ethos that brought it digital success in the first place.

Going Digital Should Mean Getting Disruptive

The distinction for me, at least, between traditional and disruptive thinking is, “How competitive are you willing to be in this new space?”At this point, there are plenty of people who’ve spent their entire careers in the eCommerce divisions of brick-and-mortar retailers, but traditional companies have to make sure that employees like these don’t get — or stay — complacent.Traditional organizations must challenge themselves to bring in new talent with strong backgrounds in digital, and they must set them up with the right organizational structures and incentives to disrupt the status quo.Barnes & Noble has proven that it’s capable of aggressively pursuing innovative initiatives, but what it hasn’t proven is that it can stay the course. Traditional companies don’t have to play by traditional rules, and if the bookseller is going to avoid the fate of its former rival, Borders, it must stick to self-disruptive leadership instead of bouncing between organizational structures and strategies.