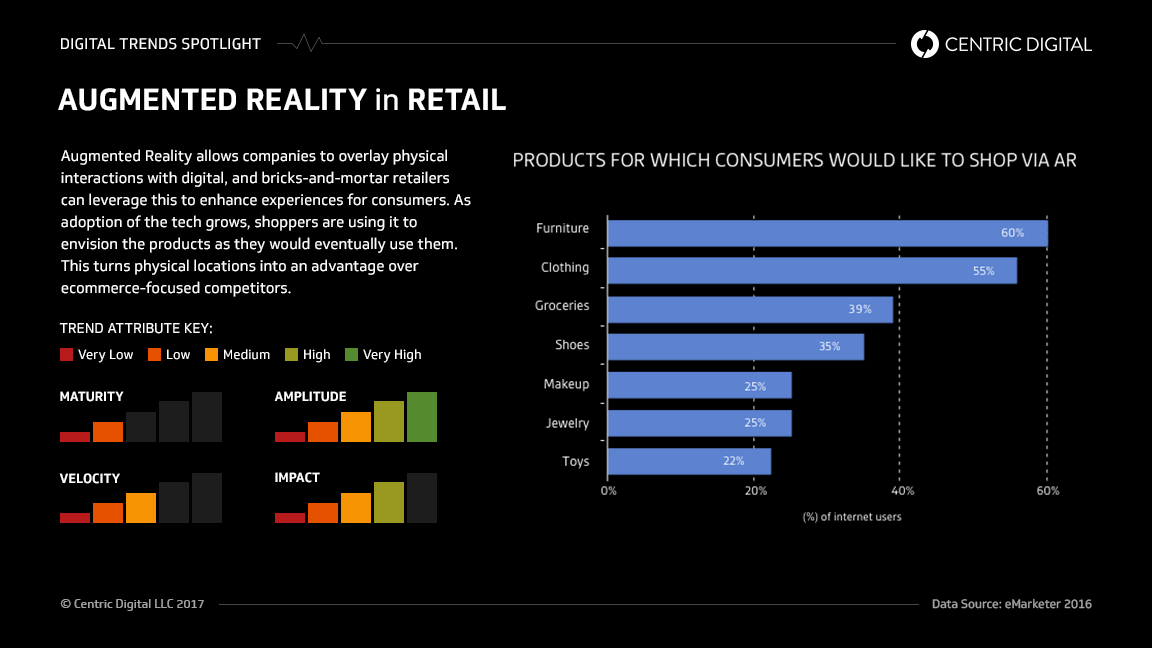 Far-sighted retailers are examining augmented reality (AR) as a critical care pathway to life-giving revenue. The past few years have been hard on retail and many retailers are barely hanging on. In 2017, at least 9 retailers passed away during the first quarter of the year. Just as the OR is for people are in need of life support, AR may be the best answer for reviving retailers.Although ecommerce only accounted for 8.1 percent of all retail sales last year, according to the US Commerce Dept., it was responsible for 41.6 percent of retail sales growth. Shoppers spent about 9 out of every 10 dollars in brick and mortar shops, which still dominate overall sales, though their share is shrinking more and more each year. Ecommerce is charging ahead, but there is still time to invest in the technology that will keep physical stores breathing.AR is more than just animations and info overlayed on top of camera images. Microsoft's HoloLens is an experimental 3D hologram projection system that brings AR off your smartphone screen. HoloLens can map an interactive screen onto any surface. AR and virtual reality are still in their infancy and there is plenty of room for clever innovation and application in the field.By recent estimates, AR and related tech will be worth $30 billion by 2020. As the competition between online and brick-and-mortar retailer rages, deploying AR will enable retailers to offer augmented interactions with physical items.

Why Consumers Prefer Brick and Mortar

While ecommerce certainly has some inherent advantages, such as lower inventory costs and a wider audience reach, traditional retailers have their own set of advantages. The first consideration for retailers is that the majority of consumers still want the kind of shopping experiences that are only possible in person.A survey by Retail Dive found that 62 percent of customers chose "to see, touch, feel and try out items" as their top reason to shop in a brick and mortar location and 49 percent of consumers enjoy getting what they want right away. Perhaps their most surprising finding is that nearly 1 in 5 shoppers go out simply for the social aspect of being part of the scene.Tactile interactions and immediacy are impossible for online stores to deliver, at least until 3D printers evolve into home-based, on-demand single item manufacturing plants. AR is helping physical stores provide memorable, hybridized customer experiences that are far richer than those provided by their online peers.In fact, there are many retailers around the world who are already leveraging AR to deliver highly personalized and contextualized digital experiences to physical, in-store goods. In some instances, omnichannel retailers are using in-store AR to boost online engagement, thus ramping up overall sales and customer satisfaction.That's the good news. The better news is that AR can deliver much more than that. Here’s a closer look at these creative ideas and revolutionary changes that AR is bringing to the retail sector.

China's largest online grocer, Yihaodian, has opened over 1,000 stores in parking lots, parks and other public places. When users open the retailer's AR app, they are able to visualize and navigate through the virtual store aisles. They are also able to virtually pick up and pay for products that will later be delivered to their home. Walmart owns a 51 percent stake in Yihaodian, making it possible that the retailer could bring this concept to US markets when it proves profitable.

Display space has always been a problem for retailers. Customers want more variety, which drives up inventory and operational costs. More variety also cuts down on room for shoppers to drive their carts, leaving them feeling cramped. AR can simultaneously address all these problems. For example, if customers want to explore additional variations on in-store items, AR can provide that without any space limitations: customers could point their phones at a shirt and see how it would look in different colors. They could then order the shirt at the retailer's online store and pick it up the next time they come back to shop.

The upside of showrooming

Showrooming is associated with its most negative outcome: when customers come into the store to look for something, then buy it online from a different source. BMW used AR to turn showrooming on its head and make it a positive. While nothing compares to the "new car smell" or the feeling of sitting behind the wheel, AR adds greater customization to that experience through Tango, Google’s augmented reality platform, allowing car shoppers to change features like wheels and trim interactively, and even displaying what the car will look like in the buyer's own driveway. Furthermore, this partnership with Google Tango allowed BMW to eliminate a large part of their inventory expense and shipping costs.

Bringing it all back home

For consumers, one benefit of having items delivered to their home is being able to test out how what they purchased fits into their lives. That's especially valuable with things like home furnishings and shoes. This is another area where AR can help establish a personal bond between the shopper and what they buy. IKEA took the lead with an AR catalog that let people see fully assembled furniture pieces in their own homes. Converse is another retailer that provided a similar AR experience, allowing shoppers to overlay customized shoes onto camera images of their own feet. In the end, this strategy accomplishes the same goal as Target's "no questions" return policy, which seeks to overcome the customer's hesitancy over buying something that may not be right for them. AR wins in this instance by handling the problem without inventory churn and restocking expenses.

Retailers have also been able to leverage AR to fuel more engagement on the sales floor. In fact, there is an increase in brands printing "markers" or images on packaging to let consumers visualize the product inside the box. Lego consumers are now able to interact with the product they are considering purchasing with a hands-on, three-dimensional model of the assembled product. Lego stores have introduced AR to show kids how these completed builds will look, without the danger of the display shattering into showers of Lego bricks.

Dressing rooms are bedrock features of physical retail clothing stores that online can't compete with. For the launch of its flagship store in NYC, Uniqlo decided to give consumers the best of both worlds. They used AR to offer shoppers a way to try items in various colors without having to change clothes. They can then readily share photos of their outfits on social media, building buzz and excitement for the brand. Across the Atlantic, high-end retailer Topshop created a similar AR world for London Fashion Week. Shoppers were able to gain the unique perspective of seeing themselves from the back as they tried on the virtual clothes.

Campaign for the social self

Selfies are the currency of social networks, which see people exchange a great deal of information about themselves and their dreams through a tapestry of selfies. For Millennials and Gen Z, selfies are not symptomatic of narcissism, but rather an extension of the artistic urge to create self-portraits. Two companies that understand that dynamic in the next generations are Tesco and Disney. They partnered to create a truly unique and easily sharable AR-based selfie experience. Tesco customers and their families were able to choose from a range of Frozen characters to join them in a selfie. Like the popular range of Snapchat and Instagram filters, the AR app could then add a special accessory to the customer's portrait, such as a pair of antlers or a Christmas hat.

The Forces Arrayed Against Retail

It's evident that retail faces tremendous financial pressures as society enters the digital age. It must contend with a shaky real estate market that undermines malls, a naturally competitive industry and ecommerce companies who have been given deep pockets from a rich investor pool. Many ecommerce businesses operate with a low enough overhead and enough investor backing that they have much more room to take chances in the retail marketplace.A clear indication of things to come: Apple introduced AR kits for app developers as a central part of its presentation at the Apple Worldwide Developers Conference in 2017. Apple is investing heavily in AR, making it easier for people everywhere to collectively work on the next generation of AR software. With that tier of backing, retailers can surely realize the potential of developing creative applications that attract consumers in original ways.Brick and mortar stores that are coming back to life are those that have begun to question their assumptions and think more deeply about how to make the best use of their physical presence.Some have already begun the transformation into a more creative omnichannel model that is equipped to weather the coming storm and provide customers the sort of memorable experiences that online-only stores cannot match.