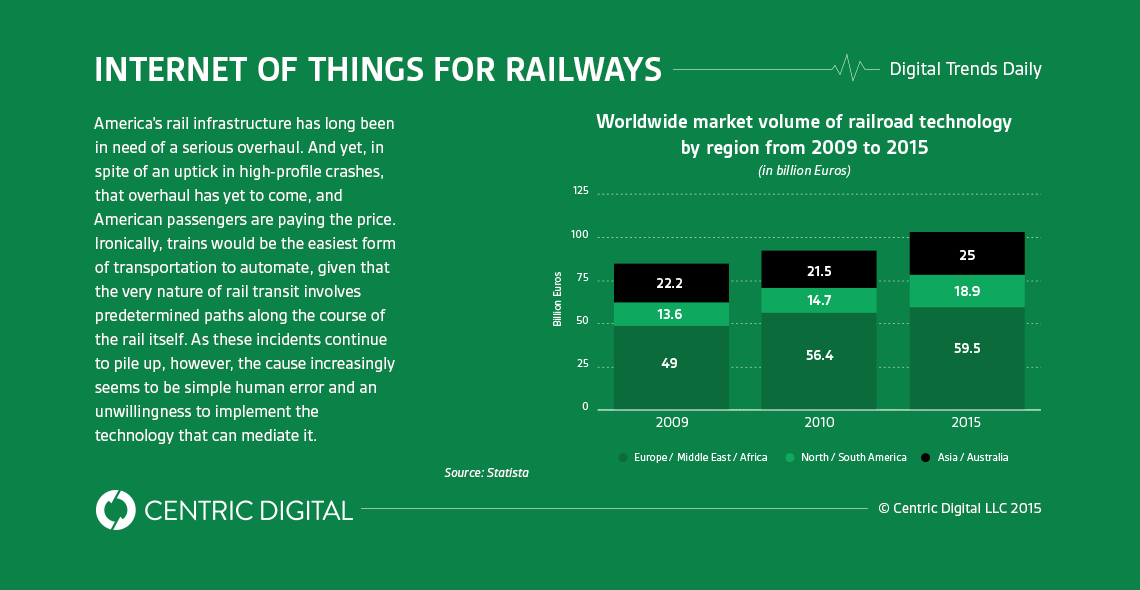 In the wake of a growing number of headline-making tragedies, like the derailment of an Amtrak train last week that led to eight deaths, the most obvious response should be to update existing technology to prevent such tragedies from ever occurring again.This month has been riddled with train disasters, from the Metro-North train that collided with an SUV to the BNSF oil train that exploded in North Dakota. Yet no one seems to be taking any serious steps at improving the aging infrastructure that has failed again and again to keep rail passengers safe.Current laws dictate that all railroads must be governed by a new technology, called positive train control (PTC), by the end of 2015. The job of PTC is to automatically slow or stop trains that are traveling well above the speed limit in a particular zone. But that still begs the question: why do all of these accidents keep happening anyway?

Though Amtrak has begun to install the system on their rails, investigations into the accident near Philadelphia have revealed that PTC technology had not yet been installed at the site of the derailment, according to Reuters. Given that the train was going more than twice the speed limit, this crash is just another demonstration of how the quick implementation of new technology -- technology that we’ve already determined to be practical and necessary -- can prevent tragedies of human error.But what seems most baffling about this incident is the fact that humans are still driving trains in the first place. Rail trains have the most obvious potential for becoming a fully-automated form of transportation. Even self-driving or connected cars involve regulating a much more free-form system of transit. With trains, the direction of each rail car is determined by the tracks -- it’s already half-automated. So why not automate the rest of it?Besides the obvious error the conductor made in careening around a bend at 106 miles per hour, he also made a more forgivable error in not knowing that the bend was coming. PTC obviously would have prevented the train from traveling at such an outrageous speed, but the implementation of Internet of Things technology could easily lead to even more sophisticated safety measures.

A series of interconnected sensors and computers that communicate with one another could be used to detect oncoming threats, alert administrators when the infrastructure is in need of maintenance, and regulate the speed and direction of trains at any given time. The need for Internet of Things technology could, for instance, have not only slowed the Amtrak train before hitting the bend, but have detected the bend in the first place, lowering the train’s speed to an even more cautious rate.That isn’t to say that humans should be eliminated from the equation entirely -- but given the heap of preventable disasters that occurred just in the last month, it’s hard to deny that letting computers control as much of the process as possible is a necessary step towards a far safer rail network.Computers, for instance, could have detected that an SUV was still not out of the crossing well before the Metro-North train collided with it. Computers could also have detected the actual rate at which oil cars can overheat and explode, which BNSF had badly underestimated.So why are we still relying on things like accelerator pedals and warning signs? Though rail companies continue to lobby for more time to update their infrastructure, the technology is already here -- if the number of accidents doesn’t decrease soon, they’ll be out of excuses.