On:
Digital Transformation
On:
Fintech 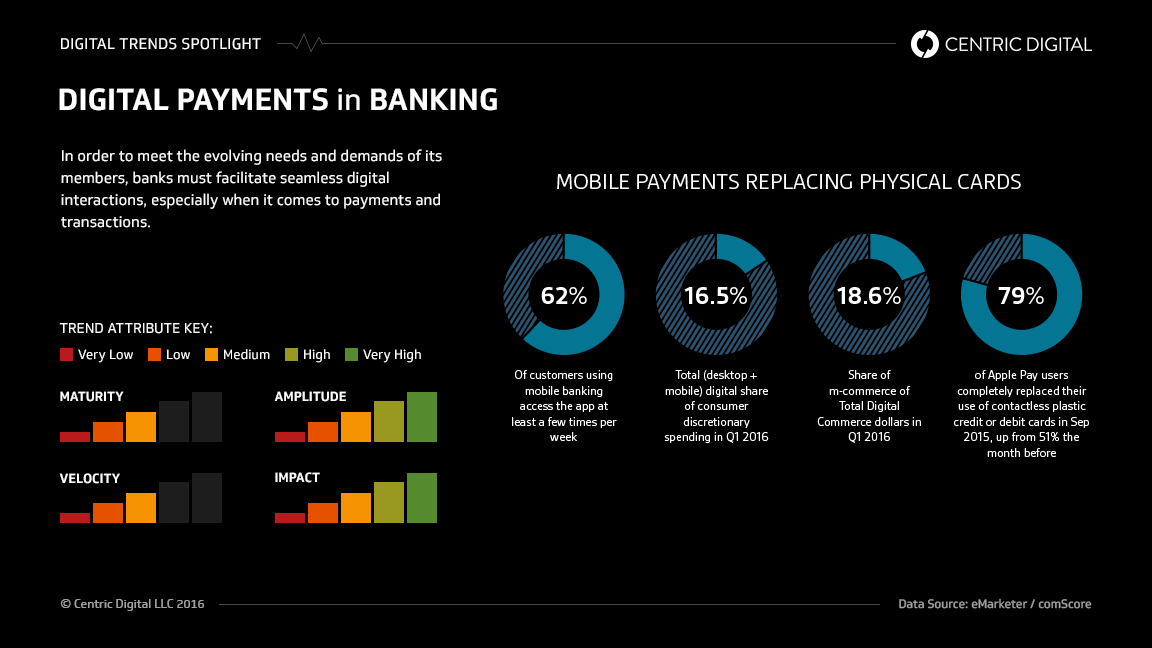 The challenge for AmEx is to avoid using its data advantage solely to drive traditional marketing, and to aim for more than an increase in consumer spending.Have you been following the troubled course of American Express in the past two years? After an extended "annus horribilis" that saw the company's market value drop by $40 billion from its early 2015 high, and a series of setbacks that resulted in a January 2016 announcement that the company would undertake a $1 billion cost reduction program, there's finally a ray of sunshine on the horizon. Fresh on the heels of its September 2016 victory in federal appeals court, AmEx has a renewed opportunity to leverage its unique advantages through creating a more effective digital strategy. This court decision restores the company's right to prevent its merchants from trying to push customers towards cheaper cards, but Visa and MasterCard are taking aim at AmEx's customers and the competition is fierce.

American Express's major difference with Visa and MasterCard is its "closed loop" operations: AmEx has its own banking subsidiaries, American Express Centurion Bank and American Express Bank, FSB. Participating merchants have accounts at these banks, which also issue the cards, so AmEx earns interest on the money it lends, as well as from its high merchant fees (which account for 65 percent of its revenue). This structure attracts an affluent customer base, and the average AmEx purchase is $150, whereas the average Visa transaction is just $50.Visa and MasterCard, on the other hand, contract with numerous banks and financial institutions to issue cards to their cardholders. There is also a secondary network made up of the merchants' own banks, which have their own agreements with Visa and MasterCard. In this "open loop" structure, the two networks of banks are the ones that earn interest and merchant fees, while the credit card companies avoid all lending risk. In this structure, the credit card companies earn their money from service and processing fees.The benefit of the "closed loop" is that AmEx can fully view all transactions in real time, whereas Visa and MasterCard provide limited access to customer data because the banks they contract with are reluctant to share information. Full access to data gives AmEx a strong competitive advantage and provides some of the key components for creating new digital architecture.

Making Use of Superior Data

The challenge for AmEx is to avoid using its data advantage solely to drive traditional marketing, and to aim for more than an increase in consumer spending. The discount rate AmEx receives from merchants is currently the highest in the industry, and this puts the company under significant pressure; growth in number of cards issued is slow, as most benefit programs have been broadly copied across the industry.Using its real-time information stream, AmEx is able to analyze trends and information on cardholder spending, and build algorithms to provide customized offers to attract and retain customers. It has partnered with Uber and Airbnb since 2014 and 2015, respectively, allowing its members to seamlessly use their AmEx loyalty rewards on those platforms. In 2015, it rolled out another service called AmEx Express Checkout, which allows members a simple, streamlined way to make all sorts of online purchases.

Building on an Early Digital Direction

In 2010, AmEx CEO Ken Chenault "saw that the advent of digital technologies was going to fundamentally alter the way people conduct commerce, pay for things, and manage and move their money," according to Dan Schulman, former Group President of Enterprise Growth at American Express. However, considering recent events, American Express urgently needs to embrace an expanded vision in their digital transformation efforts. Fortune says that AmEx is "starting to feel the burn from the nimbler 'fintech' startups that are increasingly targeting particular corners of the credit card oligopolies business."

During the past five years, American Express has been at the forefront of social media messaging: In 2011, they introduced the ability to sync their cards with Foursquare, letting customers load store offers on their card. The company's #PassionProject social media campaign of 2013 aimed at engaging millennial users, and AmEx is building on that success with current marketing pushes. In summer 2016, they partnered with Buzzfeed to create the "Epic Everyday" campaign, and their latest launch, aimed at older millennials, is entitled "Everyday Congrats." This campaign, featuring Tina Fey, uses Facebook to continue making American Express relatable for the younger generation. Jeannie Chu, VP of Global Social Media and Content Strategy, states that AmEx is doubling its social media investment and plans to introduce a Facebook messenger bot later in 2016. This bot will send users real-time information about services and rewards connected with their purchases.AmEx has also introduced a prepaid payment card supporting peer-to-peer payments, called Serve, and a Facebook app to pay your friends directly from your FB wall. The company is also able to leverage the information provided by its network to maintain relationships with merchants, using targeted marketing to match them with those customers most likely to spend more and stay loyal.

How could AmEx broaden access to more users who might not be actual AmEx cardholders? For instance, ClearXchange, the peer-to-peer payment platform created by a consortium of five of the U.S.'s largest banks, recently selected the MasterCard Send real-time payment transfer service. As Send supports 97 percent of all U.S. debit card accounts, including non-MasterCard, ClearXchange is now open to all U.S. accounts and debit cards, including ones from non-member banks. AmEx Express Checkout offers strong value to existing AmEx card holders, letting them pay online without ever having to type a card number. Can this type of access be extended to non-AmEx card holders?

Acquiring a company such as Dwolla could enable AmEx to quickly expand real-time transactions beyond existing card holders. Alternatively, Square or Level Up could also help quickly expand penetration with smaller merchants and bring new capabilities. AmEx should consider opportunities, including acquisition, of working with Mashery, Mulesoft or 3Scale (now that Apigee has been acquired by Google) to accelerate the development of an AmEx internet platform, while driving internal efficiencies and cost reductions.Internet platforms often build on innovative services to attract participants. A Fujitsu survey of 7000 participants found that digital convenience plays an ever-increasing role in their choice of banks. Thirty-seven percent of respondents said they're considering switching banks if their current one doesn't offer the mobile conveniences they're looking for. These consumers are so eager for digital convenience that 20 percent of them even declared they'd be willing to buy banking or insurance services from tech giants such as Google or Facebook. How could American Express leverage some of the unique capabilities it is recognized for, such as the best-in-class fraud detection, support services, and spend analysis or reporting?As Stripe has demonstrated, simple APIs can create a lot of value, attract many developers large and small, and build a robust ecosystem. Aggregating data and making them easily accessible is very powerful, as AmEx has already demonstrated by integrating corporate card transactions into several expense tools.

How AmEx Can Accelerate New Participant Use of Its Platform

Internet platforms typically subsidize entry of one of the participants to accelerate network effects. AmEx needs to make it easy for new participants to engage with its internet platform. Its prepaid debit cards Serve and Bluebird target new customers with lower fees, but they offer a physical card rather than explicitly building new digital platforms. Any new platform needs strong network tie-in and full integration with the rest of the company.While AmEx's "offer platform" has been available across different cards, was it part of an overarching and transformative digital strategy beyond an innovative marketing campaign? It was not sufficient to drive a change in customers' behavior; a coherent digital strategy is a prerequisite to scale. AmEx's Global Business Travel introduced an "engagement and gamification platform," but the concept has been somewhat slow to take off, especially outside the U.S. While gamification remains one element of a comprehensive digital strategy, an across-the-board transformation relies on an omnichannel approach.

The Necessity of a Comprehensive Digital Strategy

At a time when the company has to focus on cost reduction, a more explicit digital strategy can drive the internal transformations required for necessary efficiencies. It has the potential to deliver new digital platforms while building on promising technologies such as blockchain to create a new growth engine. Many of the services surrounding the basic blockchain technology still have to be created, but the will appears to be strong within American Express. In September 2016, Dave Wolf , VP of Digital Partnerships and Development at American Express, stated, "It becomes more and more important to integrate all of our services into the platforms where our customers are already going."As MasterCard is promoting "Enablement" and the "Internet of Payment Things," American Express should leverage existing assets to move beyond payment technology and create a digital platform that will effectively compete with new entrants. Despite having experienced a difficult year, AmEx still has an opportunity to leverage its substantial brand value. Known for its outstanding track record in security and personalized service, it now has the possibility of becoming the trusted partner in managing a broad set of digital customer data. If it doesn't seize the current array of digital opportunities, however, AmEx risks becoming a commoditized payment transaction "rail" for evolving digital services offered by others. As you consider your own company's digital transformation, AmEx constitutes an ongoing object lesson in how an effective digital strategy can turn around even the toughest year.